This week my three magic wishes were actually granted…

This should have been amazing…a real Eureka moment…but it wasn’t.

You see, I didn’t just find some old genie bottle washed up on the beach and rub away. I had to go into hospital to receive my three magic wishes.

I was on the gastro ward at Royal North Shore Hospital, Sydney having a camera shoved down my throat to photograph my stomach and everything in between.

That was how I ended up alone with nothing to do and plenty of rest.

Was it worth it? There are easier ways to get a break…grandparents, vacation care, play dates. The list goes on. Did I really have to go through all of that?

Believe me, next time I’ll take up one of those other alternatives instead.

I only had the procedure because I didn’t think they’d find anything…at least, nothing new! It was all supposed to be routine and if I’d thought they were going to find anything more than last night’s pizza, I never would have agreed to the procedure. Ignorance is bliss.

I don’t know whose brilliant idea it was to actually look in there in the first place. Surely, it wasn’t mine? No, definitely not!  I was just the passenger going along for the ride. I’m not driving this thing. Actually, I’m not sure who or what is in the driver’s seat but that’s another story…

Also, I have to admit that being alone was over-rated too! I suddenly felt so incredibly alone when my husband had to leave. I didn’t know how long I was going to be just lying on the bed waiting but I’m not very good at sitting, or even lying still. Perhaps, he could have stayed a bit longer but I felt like such a baby wanting to hold his hand. This procedure was nothing. I’ve had it done before and all I remember is having a very deep and relaxing sleep.

The procedure itself wasn’t the problem. It was all the other stuff. Just wearing the white hospital gown was freaking me out. I was Cinderella unravelling all the way home from the ball as I madly struggled to hold all the bits together. You know what those hospital gowns are like and I really didn’t want my undies smiling out the back. It’s not a good look!

It’s bad enough that the gown is white but the bed and the sheets and everything to do with the place are white as well. There is something quite ghostly and chilling about being around white on white on white even if I can’t smell antiseptic. I am now lying in all this white with a doobywacker attached to my finger which tells me whether I’m alive (beep, beep, beep) or dead. The nurses did warn me not to panic if the machine alarms. More than likely, I won’t be dead. Apparently, these doobywackers have a nasty habit of falling off. That’s good to know. I’d hate to have a heart attack because I’m dead but not dead!

I’m now starting to wonder whether hospital humour really is quite so funny after all.

Anyway, the nurses were just beautiful and so understanding as I talked more and more and more…an anxious mess. Against the odds, they actually helped me to relax.

As I mentioned before, I’m not good at sitting still, lying still or doing nothing. Geoff has my phone so I can’t phone a friend, surf the net or check out Facebook. However, I did manage to keep hold of a book and a pen. I start blogging in the back of my book. You know those couple of pages they leave blank. They’re like the back of a business card. They’re meant to be written on. You could even start writing your own novel in there. Well, after filling up the back of the book and then filling up whatever blank space was in the front, I decided I’d better actually use the book for its intended purpose. I’d deliberately brought along a distracting book written by some goofy safari guide. I mean, Africa is such a long, long way away from Royal North Shore Hospital and I really was doing my utmost best to take my mind off of things. Usually, I’d be reading something really D & M, philosophical or by another survivor when I’m going through something like this. However, lately I’ve resorted to humour and distraction instead. The author is a safari guide in training and the book is filled with funny stories. Under normal circumstances, I’d be laughing my head off but right now, I’m really struggling to focus. You know where you find yourself reading and re-reading the same words over and over again and you get stuck on the same line of text but you can somehow convince yourself that you are actually reading. Even though you really haven’t digested what you’re supposedly reading, you still turn the page just to convince yourself that everything is okay when clearly it’s not.  Well, that’s what this was like. I just couldn’t switch off from where I really was and pretend that I was on a safari in deepest, darkest Africa.

An eternity later, the doctor appears. A device goes inside my mouth to keep it open and a cannula goes into my hand. It won’t be long now. I’m looking forward to slipping into a deep, relaxing sleep. I’m out to it.

It’s all over. I slowly wake up and the nurse gives me a sandwich and a cup of tea. There are about 6 patients all lined up to get our reports. I’m quite blasé the report because I already know what is going to say…heartburn, hernia. There’s nothing at all to worry about.

Ha! I should have known better. Every routine test I’ve had lately has brought fresh disasters. I am told I have a nodule. I don’t know what a nodule is but there’s a colour photo of it on the report. I’m usually hungry for information and love a photo but this is different. I’ve taken a few lessons in avoidance and denial lately and I just don’t want to know.  But I am weak willed. I have to look and I’m now staring almost through it. The report says that it’s tiny…only 6 mm but it looks more like a mountain to me. It’s nasty…very nasty and if it isn’t terminal, it’s definitely radioactive or worse. Sure, I know they’ve zoomed in and made it look a thousand times worse than it is but I can’t get that image out of my head. This thing is a mountain…an Everest-sized mountain and I’m not going to climb it.

The doctor, however, seems quite relaxed. He’s taken a biopsy and I’m to follow it up in the clinic.

Geoff is also quite relaxed about the results. He’s my rock.

I’m still unconvinced. The report tells me that they will contact me within 7 days if it’s nasty and I wonder how they will reach me if I forget to charge my phone.

You would think that this would be enough drama for one day but now I am waiting for the rheumatology registrar. We live more than an hour’s drive away from the hospital and so as much as I can, I try to multi-task. That means squeezing as many appointments as I can into one day. The registrar arrives with my Professor in tow. There is no guess work involved here. I already know I’ve had a flare. As much as I might be in denial and thinking a mild flare isn’t an emergency, it is starting to look like the makings of an emergency. My prednisone has been jacked up to25mg and I’ve been put on weekly blood tests. As bad as 25mg of prednisone sounds and take it from me 25 mg of prednisone is going to do its very best to turn me into a Michelin woman with a very bad temper, it could be worse. If this doesn’t work, I’m looking at 50mg of prednisone and a trip to hospital was also mentioned. So unfortunately, this time I am not over-reacting or being some kind of hypochondriac. This is what it is.

I know it’s going to take a lot of positive motivational talk to get me through the next couple of weeks. I have been through this before and they have managed to get my auto-immune disease under control and reduce the prednisone to manageable levels. This is temporary. It isn’t forever. I can get through this. I can do it. The sun will rise. Stay tuned. 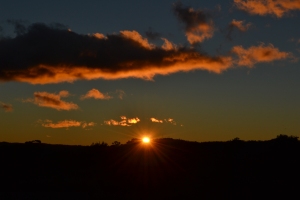 As luck would have it, I had booked the kids in for a Siblings and Young Carers Camp at Camp Breakaway  and we dropped them off yesterday morning. It was perfect timing and exactly what we all needed. I marvel at the timing of it all. When I had booked the kids in for camp, I was quite fine and had wondered whether they really needed to go. Our kids are only 8 and 6 and haven’t even been for a sleep over with a friend yet. It was quite a big deal to ship them off with strangers but I had actually met the General Manager at nippers and she was so lovely…so compassionate. I took a deep breath and I went with it. By the time the camp had come around, I was off having tests in hospital and my auto-immune disease had flared and we all really needed it.

I was super impressed by how much trouble the team at Camp Breakaway had gone to create a fun, party atmosphere for the kids. The theme is Under the Sea and they had made a mermaid and merman and you even walked through a decorative shark’s jaw when you arrived. I could literally feel the love in the air and I was so pleased my kids were going to be a part of that. It was a really happy place. Our kids were so entranced, they barely said good bye. That was something for our 6 year old daughter. She struggles to let go of my hand when I say goodnight so that was a very positive sign. I’m so relieved the kids have the opportunity to get away from all of this and just be kids for a bit. Have fun. Enjoy themselves without constantly running into shadows.

I also have the chance to rest and recuperate a bit. That said, I am also thinking about the kids and wondering what they’re up to. I wouldn’t even mind a phone call but I have to be strong. Let them go. They will be home soon enough.

I know it’s rather heavy writing about this sort of thing. People don’t usually talk very much about life, death and everything in between. I don’t usually talk about it either. As you can see from my previous blogs, we lead a pretty active life and we’ve been up to all sorts of fun activities during the holidays. However, we also live with a shadow just like so many other people live with all sorts of shadows. Things aren’t always easy but they’re not always hard either and we enjoy life. I try to squeeze the last drop out of every day and yes, quite often I over do it but what is the point of living if you do not live?

I’d love to hear your thoughts on living with adversity. How do you get through?

Camp Breakaway can be found at http://www.breakaway.org.au/