You see, I’m not the only one who has caught beginner’s bravado. It’s now spread to my husband and the kids.

When Geoff woke me up this morning, he was quite chirpy and charmed me completely when he greeted me with: “Good morning concert violinist!”

That was music to my ears!!

It might not be true but I’ve never let truth get in the way of a good story and it just sounded so good… concert violinist! I can already see my name up in lights, even though I have barely tapped into my 10,000 hours of required practice. Becoming a concert violinist takes a lot more than dreaming!

That said, there’s nothing wrong with pretend. If we didn’t pretend, we’d never dream, set goals or even try to extend ourselves.

Geoff was full of wisdom this morning.

In addition to calling me a concert violinist, he also said that I was a step closer to finding my calling or direction in life…being a violinist and not a rally navigator!

You might well wonder what being a rally navigator has to do with performing at Lizotte’s and playing my violin. That’s quite a valid question. Geoff in his wisdom arranged for Mum to drive me to the concert so I could give her directions. Mum lives in Sydney and doesn’t know the area but I am directionally challenged and get lost in my own backyard. Moreover, I was 200% focused on the concert. So having me giving Mum directions was destined to fail!!

Anyway, Mum and I had barely driven around the corner when I forgot to tell her to turn right at the huge, unmissable roundabout. Then, she didn’t want to turn right onto a major road, which is fair enough so we’re heading down all these rabbit warrens in the back of Woy Woy trying to get back to the bigger than Ben Her roundabout that I’d forgotten to mention. Not unsurprisingly Geoff, who had left after us thanks to Mister rolling around in the grass just prior to leaving, arrived at Lizotte’s well before us. In fact, he was called me on the mobile poised to send out a search party. By the time we arrived, Geoff and the kids were standing by the road like a bunch of balloons tied to a letterbox for a party. There was no doubt that this was Lizotte’s.

In some ways, all our driving dramas were a relief. You just know something’s going to go wrong so once it’s happened, you can relax. Enjoy yourself! You’ve had your drama. It’s all going to be fine from now on. 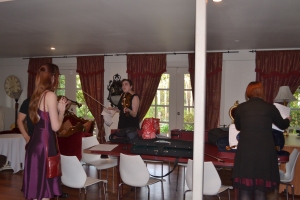 Upon our eventual arrival, I was off downstairs to the Green Room to warm up and rehearse. The Green Room was actually red with plush, velvet lounges you could just sink into and relax, if you weren’t about to go on stage. I loved the ambience and couldn’t help feeling connected to all those famous musicians who have performed at Lizotte’s before me…the ghosts of musicians past! It felt so wonderful just to be there and I hadn’t even been on stage. This was serious musician territory and I was part of it…a very small and very green part of it but still a part of it all the same. If you aim low, you stay low. If you aim for the sky, you might even fly or at least hitch a lift with Qantas!

Yet, at this stage of the game, I couldn’t get too far ahead of myself. As I explained in my last post, violins can be very temperamental and I wanted to give myself the very best chance of success. I needed to warm up properly and really, seriously etch all those notes into my brain just to be sure.

Lizotte’s is a dinner venue so the audience was all seated around tables and there’s a small, intimate stage. I believe the stage was up the front but it might have been up the back. That depends on your perspective. Geoff mentioned something to me about kitchens being about the back, which means the stage was out the front. That does make sense. Remember! I am directionally challenged!! 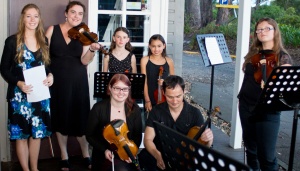 All too soon it was time to perform and after all those months of serious practice and thinking about something distant, remote and in the future, this was it. It was actually happening. I was about to play my violin for the first time ever in public… my debut!

We walked on stage. I wasn’t nervous about the performance. I was carrying my music stand and I was seriously concerned about tripping over and I had this awful sense of Murphy’s Law. That this would be just the time my ankle flipped over and I’d fall crashing to the ground. Remember I have hospital-strength muscle weakness. I’m not just talking about fear. We’re talking legitimate physical restrictions. I have a disabled parking permit and you don’t find them in a cereal packet.

However, everything went smoothly. I did it!

The stage was quite small. As we were setting up our umpteen music stands and trying to get enough space for our bows to move around without hitting each other, we suddenly noticed the lighting on our music and freaked out. My music was pale pink but my colleague’s music had bright circles all over it looking like something out of a 1970s disco den. We were mildly alarmed. We were not seasoned performers and certainly didn’t need any surprises but these are the sort of things real musicians have to contend with and unfortunately you can’t perform in a controlled, laboratory environment! (When I checked out the photos tonight, I realised that the music stands had holes in them and these lit up under lights. The things you have to consider!!) 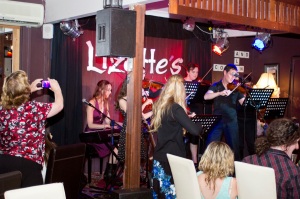 I really can’t tell you how the concert went. I was too busy performing. But we did get some very positive feedback. Our teacher was glowing with praise and had that look of a proud mother hen. She even called us “musicians” and has mentioned future performances at upcoming Christmas carols. A friend of mine also asked me how long I’d been playing with the ensemble, giving the impression that she’d thought we’d been around for awhile and weren’t just rank beginners. Geoff said “we had a good cohesive performance”.

I walked off stage and sat down with Geoff, Mum and the kids. Turned out that while I was waiting to go on stage, they had presented the junior awards and our son had received the Enthusiasm Award. This included having good behaviour so we were really stoked. He has only been learning the guitar for just over a term and is still at that awkward beginner stage trying to get his fingers to change chords. It was a bit too premature for him to perform at the concert but he was very proud of his award. 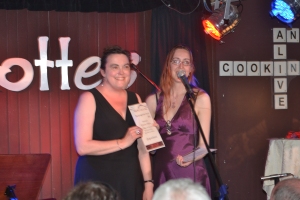 I won the Encouragement Medal, which was very encouraging. I felt like an Olympian! 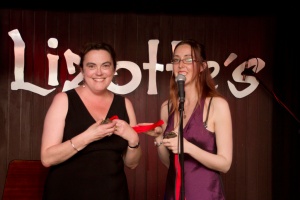 Tonight was certainly life lesson time for our daughter. She wanted her own medal and wasn’t happy when she missed out. I’m sure it really grated on her that her brother won an award and then Mummy won the medal. She has been telling me how to play the violin since she started up again last week and when she’s not getting upset about how badly she’s playing, I think she does fancy herself as a good musician or that she’s at least better than the rest of us! I couldn’t resist pointing out to her that since she has only attended one lesson since third term, she didn’t deserve one. It looks like I’ve finally found my motivation tool. I think this might just be the rocket she needed!

I’ve been walking round all day today like the cat which swallowed the proverbial canary. I was also going to say that I have the biggest smile stuck on my face but it’s not just stuck on. It penetrates my soul. I feel amazingly good!!

It’s quite amazing to think that only nine months ago to the day, I wandered into the music school for my daughter’s first violin lesson and was invited to sit in and to help her at home. I had no thoughts of learning the violin myself. We didn’t even have a violin for Miss at the time. I started out on Geoff’s grandfather’s violin, which came out with him from England back in 1890. WE then found a cheap Chinese violin on eBay, which wasn’t too bad and now I’ve graduated to the Student Stentor II. It’s still not a Stradivarius but she’s mine!

I have found this whole journey so encouraging. So often as a mother, you think about all the losses you ‘ve had since you’ve had kids and it can be easy to overlook the ways in which being a parent has actually extended your horizons. How being a parent has expanded us beyond our wildest dreams! When I took up the violin, I was barely out of the lung crisis and my auto-immune disease has been flaring and for much of this year. I have taken up the violin while sort of fighting for my life, which does seem a little crazy at times but I have no doubts that my violin is really helping me to get through it all. She is my soul mate!

Getting back to my poor sense of direction, I can’t help wondering

Speaking of twists and turns, I can’t help wondering whether the next time I head off to perform at Lizotte’s, I might turn right instead of left and somehow end up at the Sydney Opera House by mistake. Now, wouldn’t that be a hoot?

Perhaps, you could join me!