Never in my wildest dreams, would I have expected to find a hospital at the end of the rainbow but that’s what I’ve found. 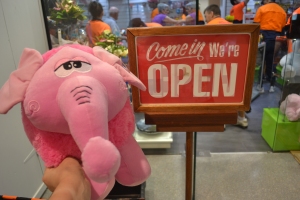 Last Saturday, we had our first trip down to the new Royal North Shore Hospital and the kids took one look at the place and called it the “Rainbow Hospital”. This was quite interesting because the outside of the new hospital is predominantly grey but it does have some panels of colour and that’s certainly an improvement on the old “Brown Hospital”.

You might recall  I wasn’t all that thrilled about the new hospital and was still sentimentally attached to the old one in my previous post  about the hospital move https://beyondtheflow.wordpress.com/2012/09/29/crossing-the-bridge/.  That all changed as soon as I stepped foot in the new hospital. It’s so light and airy, spacious…fresh. You could even call it stylish.

The very first thing I noticed when I walked inside was a bookshop…a real bookshop. That’s exactly what you need if you’re stuck in hospital for awhile. As usual, I couldn’t resist. I found Letters From Berlin by Kersten Dos and can’t put it down. It’s a true account of living in Berlin during WWII.

Then the rainbow colours hit. The lifts are all colour-coded. Moreover, all the curtains around the beds on the wards are all rainbow striped. I was quite impressed and it seemed like a lot of thought had gone into helping patients feel better mentally as well as physically. These curtains were certainly a lot more cheery than the usual hospital white-on-white but I do wonder how I’d feel after looking at those stripes for a couple of weeks and suspect a pair of sunnies might be in order.

We were down at the hospital for my regular blood infusion of immunoglobulin. We had arrived early and initially the place looked like a ghost town, although there were quite a few people wearing fancy t-shirts offering assistance. What we didn’t know was that Intensive Care and Emergency had only moved in the night before. The new hospital was brand spanking new and it was all very much in transition. This was quite interesting. We saw the Pink Ladies’ new home and it was still empty with a ladder inside. They would be moving in on Monday. It looked kind of weird… like arriving early for a party.

Due to some teething difficulties, I had to be admitted to have my treatment and was actually the first patient in the new Adult Assessment Unit in Acute Care.  It was all rather fun being the first patient and there was quite a buzz in the air. Again, there was all that settling in stuff like trying to find the light switch. The nurses were full of smiles and excitement, taking photos. It was quite fun watching the nurses explore their new surroundings and checking things out. The nurses also made me cups of tea, gave me a blanket and tucked me in. I could get used to this kind of treatment very easily!!

On Monday, I was back down again for my lung function tests back in the old “brown” hospital or  “chocolate b­­lock”, followed by an appointment in the new hospital so I was wandering between the two buildings. This felt quite weird really and a bit like traveling in between the departure and arrival lounges of two airports. It also felt like I was doing the time warp.

Back at the brown hospital, some bits were still there and other bits had gone. The post office had moved but it was still business as usual upstairs on level 8 where I had my lung function tests. When I looked out the window, I noticed fields of yellow flowers in historic Gore Hill Cemetery next door and they looked just magnificent. There is such a timelessness there and those stone monuments have been there in many instances for over 100 years…a bit like Sleeping Beauty trapped in some kind of time warp although the myriad of flowers constantly change with the seasons.

Clinic 8 where I used to see my Rheumatologist

The brown hospital is also caught in some kind of time warp. Now that the new hospital is up and running, the old building is really looking old, worn out and ready for demolition. It is well beyond its use-by date. 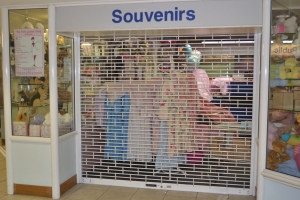 The Pink Ladies’ Shop in the old hospital closes down.

Monday was also moving day for the Pink Ladies, the hospital volunteers. The Pink Ladies are very dear to my heart (see post the Love of a Stranger). I visit their shop pretty much every time I visit, largely looking to buy second-hand books but I’m also lured in by the soft toys. I’ve also come to know a few of the ladies over the years and am a “regular”. 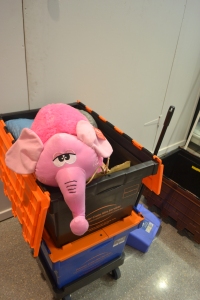 As you would have gathered by now, I have a bad track record with temptation. The shop was barely open and they were still very much in the throws of unpacking boxes, when I spotted a lonely, pink elephant sitting on the shelf. Of course, I couldn’t just leave it there and on the way out, couldn’t resist giving the elephant something of a tour. I can assure you that you won’t find photos like this in the official history.

Monday’s trip finished off with a chocolate flourless cake and a cappuccino talking to the pink elephant.

PS I was lying in bed last night and I realised that I’ve glossed over a hell of a lot in this post. You look at my crazy pink elephant and it all looks happy happy joy joy when the reality was that at I was having a hard day and I was doing just about anything to feel just a bit better. I find my lung function tests very confronting and things at the hospital on Saturday were very stressful as well. I don’t usually hang out with pink elephants and I can also resist chocolate temptations as well but on Monday, I needed all my props to get me through the day. I felt quite dreadful to be honest but by the time I wrote the post, all the positives had sunk in. Many people have been very kind to me and I was feeling so much better.

I just thought I needed to be a bit honest about all of that because people tell me how positive I am but they don’t always see the whole picture. I can sink just like anyone else but I’ve also learned how to swim and how to find my way back to the surface! Sometimes it can be a long exhausting journey too but we are all on this path and I just appreciate everyone who is on this journey with me helping to clear the path.

2 thoughts on “The Rainbow Hospital”