As a writer, words are my thing. Until very, very recently, I thought words were perhaps the only way to communicate. We had to talk about it. I had to write about it. Since primary school, I’ve been writing journals  which are all scattered around the house and are even stashed in crates up in our roof. I’ve also written countless poems and my poor computer is almost exploding with words. 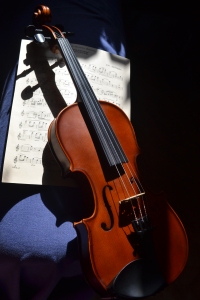 However, when I discovered the violin, I found there was something beyond words. Well, actually I’ve always known there was something beyond words because I’ve unsuccessfully grappled with these thoughts and feelings seemingly all my life without being able to translate them into the written word. Rather, they’ve stubbornly refused to be categorised, defined or shoved in a box with a concise label waiting to be filed in alphabetical order.  When it comes to writing, this is the kind of stuff that lies between the lines and seemingly can’t ever make it into print.

Yet, even though I’m a relative beginner, somehow I’ve been able to reach and express these feelings through my violin. Somehow, it seems that notes can bridge the gap between vague and often inexpressible feelings and concrete words. Through playing the violin, even with all its squeaks and mistakes,  I have found parts of myself which had been lost and disconnected, rattling around inside me like spare parts. Slowly but surely, these missing pieces are becoming more integrated. I am finding myself. Freeing myself up.

Playing the violin has not only helped me connect better with parts of myself but it’s also helped me to connect with relative strangers as well.

Last year, I started playing in a violin ensemble. It was the first time that I’d ever played a musical instrument in a group. When it comes to connecting with people, I always thought you needed to speak to communicate and preferably share something personal. However, I felt some kind of unspoken connection or synergy with the other players, even though we barely knew each other and we weren’t doing much talking. We were all just beginner violinists trying to play a half-decent note. That’s all. But I felt a connection that touched something inside. That we had reached a place that wasn’t printed on a map… somewhere personal and off the beaten track. I don’t know if that’s how the other players felt but that’s how it was for me. It was a very special experience.

You see, although I’m something of a social butterfly and very extroverted, I can still feel surprisingly awkward at times and it’s not always easy for me to find my niche. That’s why I have called my blog Beyond the Flow. I’m not quite part of the mainstream. So even for me, this experience of bonding musically was very special and to be cherished.

Have you had bonding experiences like this where communication has involved more than words? 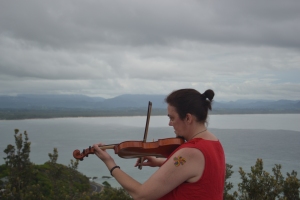 12 thoughts on “Beyond Words…the language of music.”