For example, when was the last time you stopped to think about the air you breathe? Did you actually appreciate that perfect blend of oxygen, carbon dioxide and whatever else was thrown in the mix?

Yeah, right. You probably think I’ve been sniffing way too many roses!

It’s school holidays and we are “glamping”. This is what’s known as a glamorous way of going camping. We are in a house but it’s waiting to get furnished so we’re making do.

This whole experience is making me appreciate just how much goes under the radar and unappreciated in life. What we take for granted.

Right now, my dog who is stuck outside thanks to my Dad’s “no dogs inside” ruling is probably putting himself at the top of the list. I’m not exactly sure whether he has realised that he is a dog and that dogs are indeed not people. He’s a smart dog so he’s probably worked that out but he no doubt feels superior. After all, he sticks to the rules, is caring and loving and would give up his life to protect his family. The kids won’t even make their beds without a “why me?” The dog knows he is the most popular member of the family…the most loved!! I’m sure he can’t understand why us mere mortals are allowed inside and he’s not!!

But that’s his gripe not mine. Right now, I’m appreciating chairs. I’m not fussy. I’d love anything with four legs that isn’t a stool.

Anyway, we’re staying at my parents place. They’ve just bought it and the only furniture is what was left behind by the previous owners, which means we have quite an eclectic assortment of things and many of the things you just take for granted aren’t here. 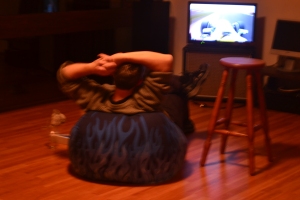 Geoff watching the car racing from the comfort of the bean bag.

So I am currently sitting on a stool hunched over the desk and Geoff is sitting on a beanbag watching TV. This afternoon, I went into Avalon and had a hot chocolate at Bookacino, a bookshop cafe. All I wanted to do was sit in a chair and read the paper but there was only one table and chairs and so I had to wait for what seemed like eternity for two girls to stop chatting so I could flop into the chair and relax. A chair has never, ever felt so good!

Cooking is also going to be interesting. So far, all I’ve cooked here has been rather evil bacon and eggs…a fry up. It’s been over 10 years since I last cooked bacon and eggs but there was something about going away for the weekend that made me feel like loads of artery-clogging fat and cholesterol. A heart attack on a plate!

There is only one saucepan without a lid here and one frying pan…some French looking thing which only just managed to fry the eggs and bacon. It’s not what you would call a family frying pan. You know…one with sides so all the stuff doesn’t fall out. There’s no way this swanky little French thing is going to handle one of my meals. It’s a bit like trying to squeeze Miss Piggy into a g-string.

So cooking meals could be tricky. I am considering whether I should turn this state of affairs into a cooking challenge. Become a one pot wonder. Perhaps, I should just be realistic and pick up my electric wok when I pop home tomorrow. I might even visit the op shop. I incinerated two saucepans recently so this might a good idea. These were good non-stick saucepans too…wedding presents. However, with my track record with burning rice, I’m surprised they’ve actually lasted this long. We’ve almost been married 14 years!

The other thing I take for granted is going into my pantry and the ingredients are all there. Every small little thing I generally need to make a meal or bake is already there. We’ve had to shop from scratch down here. I don’t really plan on doing any baking (especially as we don’t have a mix master or baking tins let alone ingredients) but I still had to have flour in the house just in case. Be prepared.

Being in a near empty house has been quite a new experience for me. Our place is cluttered and becomes more and more cluttered as I compulsively buy things from the op shops. I have such good luck there and I get bag loads of fabulous books for the grand total of $10.00,. I buy designer clothes for a couple of bucks. Geoff will tell you that I also collect tables but that’s another story for another day.

So it feels quite strange to be in a near empty house.

It feels stranger still to have hooks on the walls without any pictures. I collect antique wooden picture frames. I paint and I’m also into photography. All this means is that we don’t have anywhere near enough wall space for everything to go up. I don’t rotate what’s up there either so that even though we have an over-abundance of works, many of the same pictures have been up  since we moved in 12 years ago.

I am always trying to fit more and more stuff on our walls and so I find it almost distressing to come here and see these empty picture hooks just sitting there going to waste. It’s like a red flag to a bull. I want to stick something, just about anything up there. I can’t cope with blank empty walls. Those hooks are screaming out for attention! Pick me! Pick me! What’s wrong with me? Aren’t I good enough?  It’s almost as painful as running fingernails down a chalk board. Ouch!

I have stuck one photo up and I noticed that my brother stuck one of his paintings on the wall too but it’s not our house.

Just being in different house makes us realise how much we take for granted. After only one night, our daughter is already asking to go home. It doesn’t help that it’s raining here and it’s been too wet to go outside. She’s also one of those people  who love their own bed, their own space and firmly believes “there’s no place like home”.

On the other hand, I tend to take our home very much for granted. It needs so much renovating and it was bought as our first home and was never intended to be our last. But things could always be worse…much, much worse!! Today, our daughter asked me what is special about our house and I told her that it has us in it.

That should be enough!