Teaching the children how to cook is just as much about learning about the ingredients as the processes…the “how to”. We used rosemary in the lamb chops in Monday night’s meal and on the potatoes and sweet potatoes. I wouldn’t add it to everything but I do like my rosemary and have killed many bushes at home through over-zealous picking. This provided a great opportunity to introduce the kids to “Rosie”.

The kids with the monster-sized rosemary bush and cobwebs.

I have always loved growing herbs and as a child was quite attracted to their fragrant leaves and medicinal properties. I brewed up special rosemary “shampoo” which was supposed to give my hair added fragrance and shine. It was also fun. 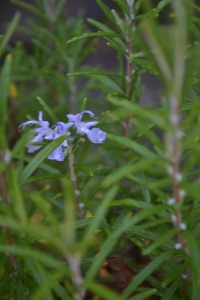 A solitary flower on our rosemary bush. The neighbour’s bush is covered in flowers.

Herbs aren’t just about eating. There is also the mythology, symbolism, history. In Australia, sprigs of Rosemary are worn on ANZAC Day as a sign of remembrance to our fallen soldiers. But historical references date back. According to one legend, the rosemary bush opened to hide the Virgin Mary and the infant Jesus from King Herod’s soldiers. Another legend says that during the flight of the Holy Family to Egypt, Mary threw her blue cloak over a bush of rosemary when she lay down to rest, and ever since, in her honor, the flowers have been the heavenly blue  of her mantle[1]. Historically, rosemary was also connected with love and was always worn at weddings and a sprig of rosemary was thrown into the grave “for remembrance”.

On a more serious note, according to Wikipaedia, rosemary is high in iron, calcium and vitamin B6,[13] 317 mg, 6.65 mg and 0.336 mg per 100 g, respectively.[14] Rosemary extract has been shown to improve the shelf life and heat stability of omega 3-rich oils, which are prone to rancidity.[15] (see http://en.wikipedia.org/wiki/Rosemary.

And also this sweet little poem:

There is also the classic song Scarborough Fair although these days we use much more basil and coriander in our cooking than just parsley, sage, rosemary and thyme.

Meanwhile, another day has more than dawned and it’s time for me to get in the pool and actually spend some time (or is that thyme) with Geoff and the kids.