So often we are looking for a sign, some kind of indication about which direction to take, which choice to make or maybe some pearl of wisdom which will permanently change of our lives. As much as I looked for signs in the past, I now realise that I was really wanting someone else to make those difficult decisions for me so I could sit in the passenger seat, instead of driving my self.

That said, I still appreciate a good sign and here are a few I found in my travels around Surry Hills and the Sydney CBD when I was in town last week for the Sydney Writer’s Festival.

Hope you are having a great week. We have been enjoying summer temperatures here even though winter kicks in next week…a disturbing sign of the times perhaps.

I finally cut my ponytail off last December but I do recall many either rushed or lazy mornings where my hair was quickly ponytailed away.

Above: Found outside a hairdressing salon in Surry Hills.

This was written beside the Buddist Temple in Surry Hills. Looked interesting especially in the light of the area’s Irish heritage. Times have changed.

I should stick this sign beside my bed so it is easier to get up in the morning. 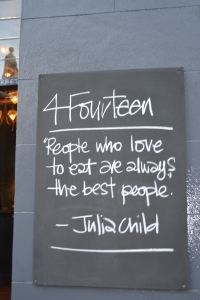 Outside a restaurant in Fitzroy Street, Surry Hills only doors away from where the Curtin family business operated for many years.

The Big Question- spotted in a boutique window in Macquarie Street, Sydney across from the Mitchell Library during the Sydney Writers’ Festival

Spotted at the Sydney Writers’ Festival.

Spotted at the Sydney Writers’ Festival. 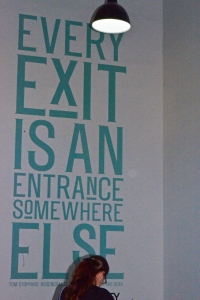 A quote from Tom Stoppard found at the Wharf Theatre, Sydney 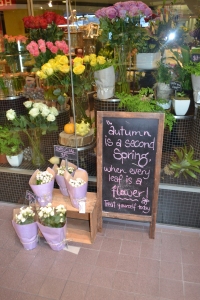 Outside a florist in the MLC Centre, Martin Place, Sydney.