We can’t all be Christopher Columbus or Captain Cook exploring the high seas in search of hidden lands. However, we should never overlook the many treasures in our own backyards. Most of the time, they’re not even buried but staring us straight in the face. You could say that I’m lucky because our borrowed backyard is particularly stunning but many of the houses and the boats around here are left vacant, which always strikes me as odd. I’m sure every house has its story. However, I am here and I am definitely making the most of every single second. Well, at least that’s my intention. 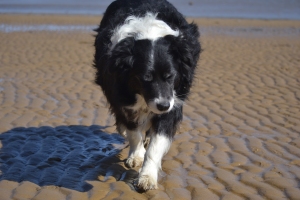 Our Border Collie Bilbo is out searching for the meaning of life. For him, that meaning is very simple. It’s his tennis ball and of course…food! Although he swears that all his bulk is only fur, we know a coverup when we see one.

It just so happens that our borrowed backyard is a tidal expanse of mud and sand stretching from Careel Bay, Avalon through to Dark Gully, Palm Beach. While mud might not have the instant appeal of golden beach sand, it has a certain je ne sais quoi and a squelch factor which is hard to beat. I don’t know if this kind of mud is any good for your skin or whether it’s full of glow in the dark heavy metals which have nothing to do with thrashing guitars but it is fun with a capital F…especially for kids and nature lovers alike. The crabs particularly love it although I wish they’d grow a little bigger!!

A Miss in mud.

Setting out from the Avalon end, I’ll let you in on what was a fleeting, temporary find. We found a lounge room set up in the mangroves. Somebody, had picked up what had been fairly top of the line cane chairs from one of the council cleanup piles beside the road and set them up along side an upturned wooden crate as a table and a lounge chair. I was quite excited to stumble into this secret world.Conjuring images of drinking port by candlelight Dead Poet’s Society style once the weather warmed up, I was looking forward to sneaking in late one night after sunset when the tide wasn’t in. However, when I returned only a few days later, it was gone. Removed. I gather this little makeshift venue wasn’t considered suitably “Palm Beach” and somebody had made a fatal call to council.

Just perfect for a Dead Poet’s Society…the lounge room in the mangroves. Shame it was only so temporary.

Before you start noticing the critters in the mud, you’ll be struck by the amazing array of bird life. 116 species of birds have been recorded as having been seen in Careel Bay, no doubt feasting on all the baby fish. Of course, there are the usual seagulls and every now and then the plovers take up residence, nesting in one of the empty backyards and fiercely dive bombing passers-by screeching and squawking as well.They can be a real terrifying menace…especially for the kids.

Grey Heron at Sunset, Pittwater. Really makes me wish to be a bird!

Much more impressive, are the stately grey Herons.

There are also a few pelicans. I’ve loved pelicans ever since I watched the movie Storm Bay based on the novel by Colin Thiele as a child. Pelicans have always been “Mr Percivals” like the pelican from the film.

Most beautiful of the land birds you’ll find around Careel Bay are the Rainbow Lorikeets.

There are large flocks of Sulphur-Crested Cockatoos along the waterfront sustained as much by people, as the food nature provides.

You’ll also spot the odd Sulphur Crested Cockatoo during the day but the cockatoos take over centre stage just before sunset when they congregate in the trees along the waterfront before swooping en masse across Careel Bay performing a deafening sunset screech as they head for the National Park. It’s quite a spectacle to watch , although you might need a good set of ear plugs. They’re almost as deafening as a heavy metal band.

Crab of unspecified type. Wish I could zap it with my wand and I won’t mention the rest.

You don’t even need to take a close look at the mud to notice the many, many holes which turn the mud into some kind of moonscape. Towards the Avalon end, the sand crabs rule the roost and as you move towards Palm Beach and Dark Gully, the soldier crabs have set up residence. These are amazing critters which march in their thousands across the mud, raised up on legs like stilts. They look like something out of Star Wars. These crabs can be a little bit scary to a certain person when they’re on the move but the rest of us find them intriguingly spectacular.

There’s also poetry in the mud with the ebb and flow of the tides. You really find out what it means that the tide waits for no one living on the edge of a tidal zone. While you’re getting yourself organised to get out on the kayak, the water miraculously disappears and you’re left high and dry. When the tide goes out, an entire underwater world is magically revealed and it’s way to far to lug out the kayak. Likewise, I’ve been caught out and the tide has come in while I’ve been out walking. Most of the time, it doesn’t matter if we get a bit wet but it’s not so good for visitors heading back home on the ferry without a change of clothes.

However, there’s not just poetry but also art out there in the mud.

Art in the crumbling boat ramps which are slowly being eaten by moss and colonised by oysters which convert their simple wooden pillars onto ornate Grecian columns.

Surprisingly, there are a few rather dead looking boat ramps along the waterfront. They remind me of Wordsworth’s poem: “The Deserted Village”. I also see this as the seas reclaiming its ground. Mankind thinks we can tame the sea but…

There’s also art in the amazing ripples through the mud. 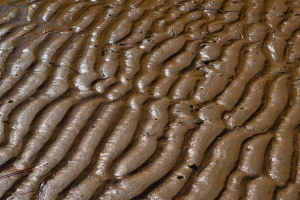 Art in nature…such incredible ripples in the sand.

Eventually, as our walk continues, we reach Dark Gully. Dark Gully is a small cove which opens up into quite an expanse of mud at low tide. It is called Dark Gully because it is shaded from the sun. I have always loved exploring and was delighted to find a little creek flowing into Dark Gully. I tried walking along it a bit but didn’t get very far as it is rather smelly and overgrown. Much better looking at the photos. 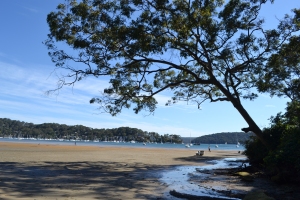 As you walk around Dark Gully, you will spot an intriguing sandstone cave with a door. I’m convinced that it’s a pirate’s lair but haven’t spotted any comings and goings quite yet. Obviously, the pirates come and go by water at night when there’s a full moon and a high tide. After all, pirates need to be discreet and keep their headquarters under wraps.

I have also enjoyed watching the clouds roll by and even soaking in their reflections in the shallows. 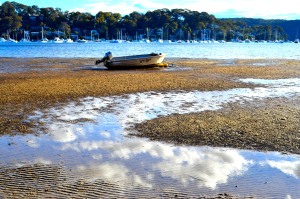 Dreaming by the Sea…cloud reflections at Dark Gully, Palm Beach.

Last but not least are all the dog walkers along the flats.

After all my bad press, Lady found herself on the lead when we went walking with Geoff. She walked very, very nicely as well. Could teach Bilbo a thing or two!

As much as I love exploring the mud and shallows finding all sorts of crabs, birds and exotic critters, I have to say that my favourite experience on the mud flats has been watching the sunset over the water. The entire sky can turn a brilliant orange and this is reflected in the rippled waters down below. Sometimes, the sunset looks like thick oozy melting cheese and is such a magnficently bright golden yellow. Even though I am quite a stress head, even I manage to relax and unwind watching these sunsets and being on the East coast, it is a rare thing to see the sunset over a body of water. 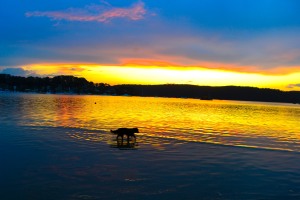 As the sun sets over Palm Beach, school holidays are rapidly drawing to a close. It’s going to be very, very hard to go home.