If you are out to impress this Christmas but have no idea how to cook, Mars Bar Slice is just the thing for you. The Mars Bar Slice knows how to win friends and influence people better than Dale Carnegie. It knows how to draw you in with its good looking charm better than Hugh Jackman. It just stares up at you with sensuous adoration and says: “Take me I’m yours.’’ Now, Hugh Jackman has never said that to me, so who am I to resist?!!

However, somehow like so many love affairs, particularly the type which burn with such a passionate flame, the road to true love is often rocky. Moreover, even if you manage to reach your destination, your affair is usually agonisingly short-lived, ending in heartbreak.
Well, that’s what happened during my affair with Mars Bar Slice. Instead of making it for us and the family and keeping all that gooey, caramelly chocolate all to ourselves, the kids dobbed me into their respective classes and this entire batch of Mars Bar Slice was heading off to school for their end of year Christmas parties. After sharing that unquenchable fire, the Mars Bar Slice was deserting me without so much as a parting glance over the shoulder. Not even a text! The scoundrel!! What a cad!!!
I’m sure you’ll agree with my angst: “Why couldn’t my kids be the ones who take the potato chips?”

This could be one of the downsides to my “teach the kids how to cook project”. My expertise as a cook has significantly improved and they’re now used to gourmet. They don’t always like it but they’re having a rough time eating plain ordinary sandwiches these days. Well, they’ve never really eaten their school lunches but they’re now asking lots of questions about our meals, the ingredients and are becoming quite discerning.
My daughter had actually put me down for Caramel Slice. It might be her favourite but it’s relatively expensive to make and has three layers and is what you would describe as an effort. It lasts our family a week and I just couldn’t cope with the thought of all those kids devouring my precious caramel slice in seconds without any appreciation whatsoever. Caramel Slice needs to be savoured…especially a good, home-made version.
I couldn’t part with Caramel Slice yet at the same time I was having trouble resisting the Mars Bars themselves. There we were… the kids and I… chopping up 6 entire Mars Bars into tiny, little pieces without sneaking even the teeniest crumb. You could just imagine the temptation… our frustration!!!! The frustration continued, however, as we tipped those scrummy little bits of Mars Bar into a hot saucepan and melted them down like chocolate gold. AHHHHH!!! If Mars Bar Slice wasn’t so good, it would have been a crime! After all, Mars Bars are made to be eaten. Eaten right now, without any of that delayed gratification crap.
What was I thinking? Surely, we could have sneaked just a few little bits? Was I crazy? There are no laws against sampling the merchandise. Surely, the alchemy which is baking could spare a few little bits of Mars Bar without ruining the chemistry? That’s probably true but there were three of us cooking and surely we all couldn’t take a bit…and a bit…and a bit more? After all, once we’d had a bite, there was no way we could stop. Call us weak-willed but Mars Bars are made to be eaten. All this “tasting” would have left nothing but plain rice bubbles in the finished product.

Our daughter doing some mixing.

So here I am being incredibly self-disciplined and making the ultimate sacrifice. Well, I’m not dying for my kids so once again I exaggerate. Use a bit too much hyperbole but if you knew me well, you’d know that I just don’t part with chocolate. I eat it.
But the good thing about the Mars Bar Slice is that it’s fairly quick and simple to make. Moreover, as the kids helped me make it, it became a team effort and I detected such a sense of pride. They were really looking forward to sharing the Mars Bar Slice with their friends. It was our special creation. We’d made it ourselves. You can’t beat that…especially with a packet of chips!

Mister spreading the melted chocolate topping over the base.

It was hard slicing up the Mars Bar Slice and packaging it up for school but hey a few pieces couldn’t fit in the box and I did trim off the edges “for presentation”. Strange how these “scraps” somehow made it down the hatch with my cup of tea. Yum!
I thoroughly recommend Mars Bar Slice. It would make a scrumptious addition to your Christmas menu and a delectable morsel to go with a cup of tea later in the afternoon once lunch is wearing off. Far more delicious than Aunt Mary’s fruit cake!
Enjoy!
xx Rowena
PS If you’re looking for love this Christmas, a little Mars Bar Slice will go along way. Better than after shave or that little black dress! You won’t even need mistletoe!

Directions
1. Grease and line the base and side of a 33cm x 23 cm slice pan with baking paper, allowing the sides to overhang.
2. Combine the butter, golden syrup and three-quarters of the mars bars in a medium saucepan over low heat. Cook, stirring with a wooden spoon, for 5 minutes or until mars bars and butter melt and mixture is smooth. Remove from heat. Do not leave unattended as it could burn easily.

3. Place the rice bubbles and remaining mars bar in a large bowl. Add the mars bar mixture and stir until well combined.
4. Spoon the mixture into the prepared pan and use the back of a spoon or a spatula to smooth the surface.

5. Set aside for 1 hour to cool completely.
6. Place the chocolate and copha in a heatproof bowl and melt in the microwave for 1 minute and then blasts for 10 seconds until melted.
7. Pour chocolate over the top of the slice and spread evenly using a spatula. Set aside for 30 minutes to set. Cut into squares to serve. 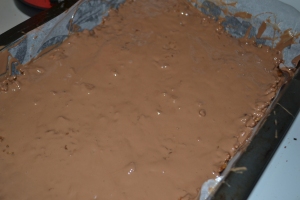 The finished product before slicing.

PS: You wouldn’t believe it. My daughter arrived home with half  her stash of Mars Bar Slice leftover from the class party. That has to count as a real answer to prayer. Funny, I would’ve thought God would have been too busy getting things ready for Jesus’s birthday to be reading my blog draft today. He’d have to be an almighty multi-tasker!

PPS: IN case you’re wondering what the big deal is about Hugh Jackman, before he made it in Hollywood he used to be our local “it” guy. I never met him but a friend of mine used to catch the school bus with him and one of my friends used to travel down the local train line going “Hugh Spotting”. We were all going to single sex schools and were a bit deranged. Yes, he was definitely a local legend before he even hit Hollywood.

6 thoughts on “Mars Bar Slice…It’s Out of This World!”