In my last post, I confessed to running away from home for the weekend for some seriously self-indulgent R & R after a rough week of medical tests for our daughter .

While Saturday saw me catching the ferry to Palm Beach and time traveling back into my early 20s, on Sunday I caught a lift to nearby Avalon for a seriously indulgent feast. That’s right…food glorious food! So you can go stick your green smoothies and assorted super foods where the sun don’t shine. I’ve now subscribed to the pleasure principle and I’m in hot pursuit of some seriously indulgent foodie treats!! 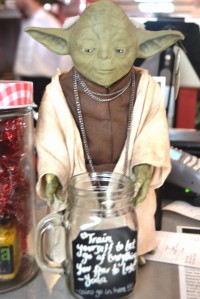 Yoda has been relocated to Sydney’s Avalon Beach.

My first stop was lunch at Yoda. Yoda is the sort of place you’d expect to find tucked away in an alleyway in South-East Asia. Yet, it has somehow astro-traveled to beach-side Sydney via the Millennium Falcon so now I can safely enjoy those authentic Asian flavours without catching some ghastly, turbo-charged, gastro bug. I’m not always an adventurous restaurant eater and often stick with what I’ve had before and really enjoyed. I don’t get to eat out all that often and so I don’t like taking chances. The food not only has to be good, it has to be something I love. L-O-V-E LOVE!! It also has to be better or different to what I cook at home and I’m a good cook. When we go to Yoda for dinner, I tend to order the Tea smoked duck with freshly spiced orange sauce & coriander salad or the Vietnamese chicken cabbage salad with peanuts, roast garlic & house dressing. These are both fabulous, authentic dishes. However, I thought I’d try something different and chose Laksa lemak which is a coconut soup with chicken, prawn, fishcake, noodles & cucumber/coriander salad. This was such a treat and I felt like I was casting a fishing line into the richly fragrant soup. Hey presto! I caught some octopus, fish cake and then a few prawns. It was such a treat and much more productive than any of our fishing expeditions where we’ve only caught fingerlings we had to throw back.The seafood was really well cooked and tender and the Laksa soup with it’s rich, aromatic flavours, was just divine.

However, the food wasn’t all I experienced at Yoda. As I shared in my previous post covering the ferry and bus ride over, when you travel alone you met such a smorgasbord of interesting characters.

Sitting at Yoda, the gentleman next to me struck up a conversation. I’m not saying he was trying to pick me up or anything like that. It’s just what Avalon is like…so community oriented and friendly that you don’t think twice about talking with total strangers. Anyway, my new-found friend is “batching” while his wife’s away for an extended time looking after her sick mum. This has left him in a bit of a spot. Should he spend month after month staying home in front of the box by himself or get out there and keep living? It’s a hard call. He kept saying: “you only come this way once”, which is so true. Nobody wants to waste whatever precious time they have left. From what I understand this means going out to see a few bands. Eating out. We all want to carpe diem seize the day but when you’re married and your partner is out of action for whatever reason, what are you supposed to do? Stop breathing? I don’t know. As an extrovert myself, I could sympathise.  We all have to get out, although that said, there are certain activities which should be curtailed.He told me his wife had called saying she’d heard he was at Palm Beach with a blond and he replied: “At my age, what did you expect me to have? A bucket & spade?” No to be fair, mentioning a blond conjures up all sorts of connotations where as if she’d been hanging out with a woman with glasses, for example, would it be so evocative? Anyway, he had a fine wit and certainly had me in stitches and I suspect he’s been up to no more mischief than wishing he was 21 again!

After indulging at Yoda, I headed across the road to Bookacino, a landmark Indy bookshop with a cafe out the back. For a die-hard bibliophile, Bookacino reminds me of exploring your grandparents’ home with all its nooks and crannies. Exploring row after row of titles, you never know what you might find and the new worlds those pages will open. Being an insatiable sticky beak, I just love it.

Of course, despite our cascading  columns of books and claustrophobically packed bookshelves, I can’t go into Bookacino without taking new “friends” home. After all, how could I ever leave a great book homeless and alone? Oh no! It needs love, family, a place to call home! This might sound like very faulty logic. After all, how could a book living in a crowded bookshop with thousands of friends, or possibly rivals, ever be considered homeless or even  alone? However, the heart tells a very different story. I hear its cries!!

This time, I walked out with The Art of Belonging by Australian social commentator, Hugh Mackay and a colouring-in book: The Impressionists. for our daughter. 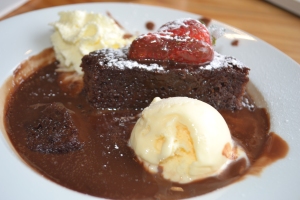 Next stop was Cafe Ibiza. To be perfectly honest, I must confess that I wasn’t going there for health food. Rather, I was looking for the most indulgent, decadent chocolatey chocolate thingy that I could find.  Something so evil it would smash the evil calorie counter. What I found, even exceeded all of my superlatively luscious, chocolate fantasies. A simple chocolate cake warmed and smothered in chocolate sauce and as I ate the cake, the chocolate sauce became a sumptuous soup. I dove deep into its incredible depths and didn’t even rise to draw breath. Oooh! Death by chocolate never tasted so good!

After such indulgence, I’m of a view that “when you’re on a good thing, stick to it” and I’d much rather stick to an endless supply of chocolate sauce than a can of Mortein insect spray.

So now I’m on the search for the ultimate chocolate sauce recipe to hold me over until my return. It’s a matter of life and death!!

“The greatest tragedies were written by the Greeks and Shakespeare…neither knew chocolate.”
― Sandra Boynton

After such therapeutic indulgence over the weekend, I’ve decided that I need to throw caution to the wind closer to home and break out more often. After all, we only live once!

20 thoughts on “Therapeutic Indulgence: A Rendez-vous with Laksa and a Saucy Chocolate Cake.”