As the years pass by and a spirit of creative rebellion fades away and the realities of work, mortgage, kids and life take over, it’s easy to feel that person was someone else. Perhaps you, like me, felt you belonged in Dead Poet’s Society going  out in the woods reciting Whitman, or indeed your own poetry, by candle or torch light or perhaps you really did fit into one of those Hollywood coming of age films…a cheerleader, the jock..or indeed the jerk.

Yes, indeed there was also “The Revenge of the Nerds”. That was released while I was still at school.

When you first enter the University of Sydney through the iron gate into the Main Quadrangle, you can’t but be impressed by the years of conservative tradition and the incredible minds who have walked these hallowed corridors. As Australia’s first university, there is and always has been a lot of prestige, pride and a real sense of academic achievement, which is encapsulated in my graduation photo with the tradition black gown with ermine trim.

The historic sandstone building in the Main Quadrangle featuring the iconic Jacaranda tree which was planted in 1927 by EG Waterhouse. The tree is an unfortunate harbinger of bad news. As it’s branches start to bud, exam time is looming.

However, when it comes to getting that all-important university education, what you learn outside the books is just as important that those set texts which will ultimately earn you that all-important piece of paper and the job of your dreams…a career.

As far as my education at Sydney University was concerned, it was all focused on “Manning”. Manning was a three-story student haven. The bottom floor was for the early birds and where you could get a morning coffee and veg out while skipping lectures. The second floor had the cafeteria and the all important “Manning Bar” scene of much philosophical musing, pursuit of the flesh and the annual band comp. The third floor of Manning was where the private school people hung out and in retrospect was rather elitist. While I might have qualified for the prestigious selection criteria, I felt much more at home among the bar flies, although all I used to drink was a single West Coast Cooler, which, by the way was rated as one of the daggiest drinks along with Passion Pop.

The crew I mingled with at the bar, were often living out of home in one of the rundown terrace hovels around campus and unlike the folk upstairs who were flaunting their designer labels, there was something greater at stake at Manning Bar…street cred. UNfortunately, I had no street cred whatsoever and not even a pair of Doc Martin’s to pretend. My “colleagues” would indulge in bottles of McWilliams Royal Reserve Port, which had doubled in age by the time you’d walked home. It was raw stuff which, again damaging to my street cred, I used to drink with coke or lemonade.

Of course, the big event each year on Campus was Orientation Week where, in addition to taking care of all the business of enrollment, the clubs and societies held stalls out on the front lawn. These clubs and socs promised everything but a debauched feast straight out of the Middle Ages. I belong and even ran the university’s writer’s group Inkpot and was involved in poetry performances and jam sessions of sorts. Another hit was S.U.C.R.O.S.E (Sydney Uni Chocolate Revellers Opposed to Sensible Eating). I remember one event held in winter and we were all wearing coats with very deep and multiple pockets and in addition to shoveling all I could eat into my gob, I also loaded up my coat for a midnight snack.Of course, there was also the Sydney Python Appreciation Movement (SPAM). I wasn’t so into Monty Python myself but I loved all the spectacle and theatre…and the way out costumes. There was the Grim Reaper and also Erik the Viking. I think we ended up singing the SPAM song on MTV although I couldn’t be sure. University days are filled with myths and legends. 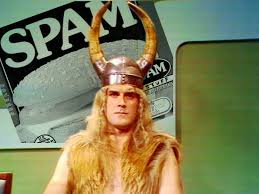 I’m sure you won’t be surprised to find out that I ran for editorship of the university newspaper, Honi Soit. Our team was called The Antonyms and we did a whole lot of promotional posters using ant words such as “brilliant”. Like all political campaigns, the competition was fierce. Our main promotional strategy, aside from posters around campus, was writing slogans in chalk around campus.Our opponents, the Newshounds, got hold of some super-bright fluorescent chalk, which I’m sure, could have been seen from space. We also made a huge blank ant (pictured), which we drove around. A friend of mine who got behind our campaign, had an idea to turn the tunnel between Manning and the Holme Buildings into an ant tunnel so there we were about 4.00 AM in the bitter freezing cold turning the tunnel poo brown and painting black ants throughout. It wasn’t even surprise when we ran into the Newshounds who’d set up at the other end of the tunnel. The battle was on. Unfortunately, our more nature-inspired ant tunnel was no match for their bright paint. Needless to say, the Newshounds won the election and I think our team had fallen apart before the election was even done. But it was great fun!

Here I am posing in front of the Ant-Mobile running for editorship of Honi Soit in 1991.

University also provided me with my first opportunity to get published. I had a letter to the editor published, which protested the introduction of fees. However, I really made a bit of a name for myself as a bit of a roving Germaine Greer writing about sexuality and in particular double-standards on campus. The first article was called: “Damned if you do, Damned if you don’t: Attitudes towards Female Sexuality” and the sequel was about the Sensitive New Age Man (SNAG). I also had a poem about a guy who had an affair with his computer published. I’ll have to post that once this A-Z Blogging Challenge is over. I’m in survival mode at the moment. Tomorrow being ANZAC here commemorating 100 years since the landing at Gallipoli, I’m needing to get onto that as well as wake up at 4.00am as the kids are marching in the Dawn Service with Scouts. Geoff’s Great Uncle served in Gallipoli and I’m desperately trying to put details together while writing this and baking ANZAC Biscuits, which are bound to burn with all this multi-tasking!

This has been U for University Antics for the Blogging A-Z April Challenge.

Anyone game to cough up any of their university or college antics? Don’t be shy!