On Monday, I walked around the Sydney Opera House with my UK friend, Wally photographing him in front of the Sydney Harbour Bridge. Of course, these are two incredible, architectural icons which literally scream out: “Sydney”!!! You couldn’t be anywhere else.

Or, so I thought.

That was until we reached the end of Bennelong Point where the Opera House is located and came across barricades and a huge banner: “Please Do Not Feed the Seal”

A seal in Sydney?

By now, I should expect the unexpected but although I’ve lived in and around Sydney all of my life, this is the first time I’ve heard about a seal being in town. Well, that is in recent times. 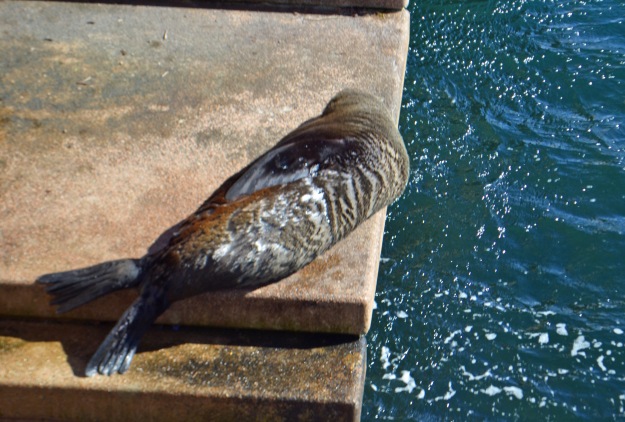 I walked up to get a closer look and sure enough there was a seal sprawled out at the bottom on the stairs soaking up the glorious Autumn sun.

What was a seal doing in Sydney Harbour…especially sunning itself on the Opera House steps?

Or, was it crossing off its bucket list? It, too, wanted to visit Sydney and check out the Bridge, the Opera House…or even sample our local cuisine?

I can understand wanting to travel. See the world. However, I’m sure there are better places to catch fish but each to their own. I just hope it doesn’t start glowing in the dark. I’ve heard there’s all sorts at the bottom of the Harbour…not to mention a few crooks and corrupt politicians from the 80s what with the “bottom of the Harbour” racket. All that drama resulted in a Royal Commission but that was long before this seal’s time.

Another possibility is that despite the banners asking us not to feed it, the seal has actually come to Sydney to sample our Aussie fish and chips. Not exactly a healthy choice and more than likely to make the poor seal sick but tell me who actually does read the fine print? Certainly not a seal!! I can’t help wondering whether it was heading for Doyle’s at the Beach, an iconic Sydney seafood restaurant, at nearby Watson’s Bay? Perhaps, the seal, like me, was directionally challenged and ended up at the Opera House by mistake? Took a wrong turn? Had trouble with its GPS? Palm Beach fish and chips shop might also have been on it’s list, although I’ve never seen a seal at Palm Beach.

However, thanks to the signage, there’s certainly no fish and chips for this seal. No! It has to fend for itself and I must say it’s looking nice and plump. It certainly isn’t wasting away!!

Another potential destination was Taronga Zoo. Perhaps, it fell for rumours something along the lines of a lifetime’s supply of free fish and thought it was worth a visit? I don’t know but we all know the game “Chinese whispers”. It doesn’t take long for the message to change and distort completely!!

Yes, that was quite a plausible explanation.

Hmm…thinking of Finding Nemo…did the seal come to Sydney looking for someone? Somehow, I doubt it. It’s not exactly moving around all that much.

Anyway, whatever brought the seal to Sydney, in between fishing trips, it is simply relaxing. Soaking up the glorious Autumn sunshine while the paparazzi snap away. It doesn’t even attempt to pose for the camera. No! It’s quite happy for you to photograph its butt and post it on Facebook and goodness knows where else. Doesn’t insist on a better perspective.

As Wally and I left the seal and the Opera House with it’s panoramic view across to the Bridge behind us, I couldn’t help but appreciate those unexpected surprises which somehow leap across our paths. That we should never over-plan or micro-manage our lives to the extent that we haven’t got time to take the detour, pause for five minutes and watch a seal sleeping beside Sydney Harbour or the golden light of the full moon rising illuminating the black, inky sea. We not only need to leave a little breathing space but also room to stretch out and even swing the metaphorical cat. Yet, although time shouldn’t be a luxury,it’s only when we value something that we truly appreciate its worth.

It’s always hard to get that balance right!

Have you come across something unexpected on your travels lately? Please share your stories in the comments.

PS You can read more about our walk around the Opera House in my previous post here: https://beyondtheflow.wordpress.com/2015/05/12/sydney-opera-house-new-perspectives/