Apparently, humans are not alone in needing their castle. It appears that a certain dog also needs her own castle. Once again, Lady has usurped her position in the hierarchy and has taken over our home and made it HER castle!!  After all, why stop at a kennel when you can take over the entire house…especially when you’re a “Lady”!By the way, she’s also set her sights on our car and world domination is only a few paw prints away.

Not that our place is a castle. It’s actually more of a “renovator’s dream”, which as is often the case, has become more of a “renovator’s nightmare”. It’s now 14 years since we bought the house and although we’ve made some progress, we’ve been stuck in some kind of perpetual holding pattern for a considerable slab of time. Actually, we’ve steadily been going backwards.

Now, if you’re not from Australia or New Zealand, you might not pick up that there are castles and then there’s: THE CASTLE!! A movie which turned a humble weatherboard home located right on the edge of Sydney Airport into the Taj Mahal.After receiving a resumption notice to extend the airport, blue collar worker Darryl Kerrigan,went all the way to the Australian High Court to save their home, saying:”I don’t want to be compensated. You can’t buy what I’ve got!” This is, therefore, your classic tale of David versus Goliath and even though it parodies the working class Aussie battler., it does so with a sense of admiration and near reverance, not ridicule. 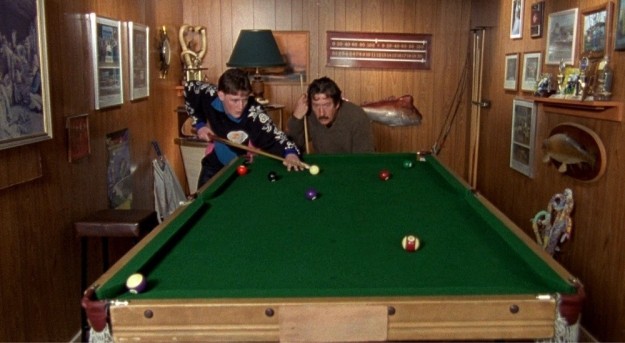 The Castle’s inner sanctum was the “Pool Room” where anything special was proudly put on display:Now, when someone receives a present they really love, you’ll often hear: “This is going straight to the pool room.” www.youtube.com/watch?v=MBXHTvgN5ko

Son Dale and father Darryl comb through the pages of an Australian classified adveretisments newspaper called the Trading Post. Dale would find the most extraneous items such as jousting sticks and Dad would ask how much they want for them. and in a phrase that has now been incorporated into the Australian vernacular, Dad would reply: “Tell him he’s dreaming!!” https://www.youtube.com/watch?v=jL2DH-nKBeA

Another interesting scene in the movie is a trip to the family’s holiday house at Bonnie Doon. which is surrounded by a veritable jungle of towering powerlines. I’ve actually driven past where that scene was filmed and those powerlines truly dominate the landscape! You’ve got to say that it was definitely a case of  “beauty is in the eye of the beholder”.  or that “life is what you make it”.

As far as our place is concerned, I certainly don’t consider it my castle but perhaps once the renovations are “done”, I might be able to view it as more than some kind of sandcastle. To be honest, it would be great to denote the place and rebuild rather than renovate but small steps…

Meanwhile, Lady is back out to her kennel. Actually, it’s Bilbo’s kennel and we’re not exactly sure who’s sleeping where but they have been spotted sharing Bilbo’s kennel. However, as they’ve both had the snip, this isn’t quite as “romantic” as it sounds. They’re probably just cold…lonely…

Meanwhile, I’m dreaming of a different sort of castle. Indeed, I wouldn’t mind a chateau but right now I’d be ecstatic just to have a house that didn’t need any work and was “done”.

I’m sure Geoff would more than second that motion!

15 thoughts on “The Dog and her Castle”