To read about the journey there, click here: https://beyondtheflow.wordpress.com/2015/08/19/me-myself-i-writing-a-complex-character-profile/

However, I’m not returning home quite yet. I am yet to get to my doctor’s appointment at Royal North Shore Hospital, which was actually the reason for my trip. Despite star billing, Surry Hills was a detour, not the destination. So typical of me that I get so caught up in the detour, that I almost forget the main event.

There I was wandering along Crown Street, camera round my neck practically photographing anything at all, as though I had somehow transcended time. Meandering in and out of shops and still fully intending to stop off at the Vegan Mary Cafe for my much anticipated Coconut Chai Latte. Popping into the Salvo Store buying a bride doll for my daughter, huge turquoise, chenille bedspread (only $3.00…what a bargain!) and a recipe book from the 1st Series of Masterchef.

Turning into Albion Street, I’m now lugging a huge Ikea bag in addition to my bulky camera gear and writing journals. I look like I’ve been away for a week, not simply on a day trip. That said, how many middle-aged women go away for a week with a bride doll? Not many but I can sort of get away with that. After all, she’s a gift for my daughter.

I knew the sands had been flowing through the hour glass. That it was time for a much needed reality check.

Checked my diary. Checked my watch. Yikes!! 3.00 had become 2.30 and suddenly I had 45 minutes to walk to Central, catch a train and lug myself up Gore Hill to the hospital. As much as I love that John Lennon quote: “Life is what happens while you are busy making other plans,” somehow I don’t think the Gastro Specialist would appreciate that. He’d much rather:

Not for the first time, I wished I was Superwoman and could leap tall buildings in a single bound and suddenly get from Surry Hills to Gore Hill as the crow flies, instead of relying on the vagaries of public transport.

Moreover, although Gore Hill mightn’t be Everest, it must be close. I’ve had several near-death experiences tackling that hill heading to appointments and you’ve really got to wonder who decided sick people needed to become mountain climbers to access treatment?! 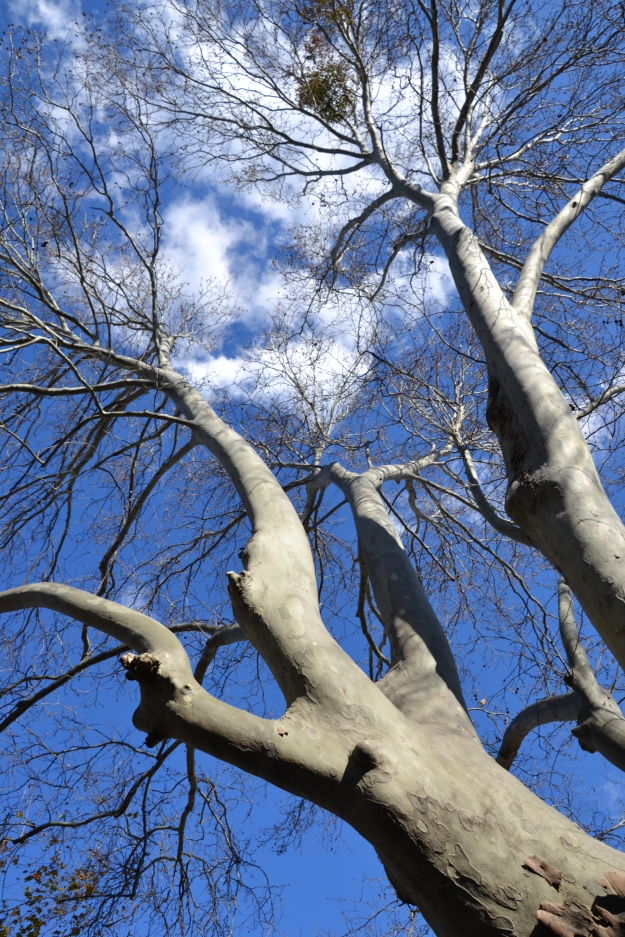 So there I am running incredibly late for an appointment, which I’ve had to reschedule 3 times and I really need to get the results of the endoscopy I had a few months ago and yet I’m still in Surry Hills. I still have my camera and there is just too much temptation to ignore. I’m pulling and tugging at the zipper on my camera bag almost ripping the damn thing open to prise out the camera in my desperate haste. I’ve spotted what must be some kind of Supermodel gum tree with incredible white branches soaring upwards into the deep azure sky. The branches almost appeared to be dancing and I was captivated. Mesmerised. Photo opportunity!!! It was like a siren in my head eeeore eeore.

Time stood still for those few precious moments. At least, it did for me!

Humph! I did mention in my previous post that I am both the protagonist and antagonist in my story and as this case in point illustrates so well, I have a brilliant aim when it comes to shooting myself in the foot!

Anyway, my justification for such apparent procrastination was that the doctor kept me waiting for 1.5 hours for my last appointment and is more than likely going to be late again. Being quite the egalitarian, I also feel that if the doctor can run late, so can I. The door swings both ways.

The Clock Tower at Central Station, viewed from Surry Hills.

Fortunately, I manage to get to Central Station in record time and see that a train arrives in 4 minutes but I’ve still got to get down the concourse, up the stairs and somehow still be breathing. I don’t know how I managed to pull it off but I make it with a minute to spare and as I collapse into my seat feeling my heart about to burst through my chest, I notice an elderly lady peering into my bag…the doll. She’s not the only one looking either. There are at least 8 sets of eyes staring in there. Her golden hair is flowing over the edge of the bag and her eyes are closed. She’s so life-like and with her eyes shut, she almost looks dead. Like I’m carrying a small, dead bride in my bag. Call the cops. 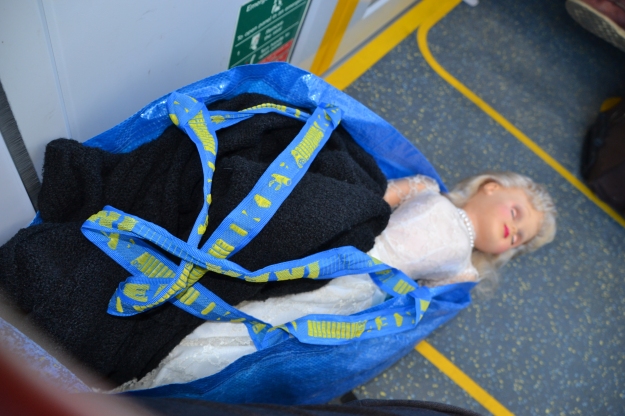 The bride doll on the train.

“She’s for my daughter,” I explain.

That seems to satisfy the curious glances. I’m not some crazed mad woman, after all.

Well, I am but they just don’t know it yet.

Anyway, not that I’m on the homeward journey, I need to get back to thinking about character development and getting back to the “book project”. Time to put my ruminations about Surry Hills on hold, as we return to working on character…the protagonist, antagonist….myself.

Soon the train is clattering over the Sydney Harbour Bridge, not that I notice. My heart’s still racing!

I arrive at St Leonard’s Station with just ten minutes to spare. That’s almost possible but I’m not the world’s fastest walker. Indeed, I have a walking stick and it’s more likely to take half an hour. I’m starting to think about catching a taxi but there isn’t a taxi in sight. I’m heading up the hill and spot what could be a shortcut and in my desperation, decide to give it a go. This path doesn’t seem quite so steep and might just save me from a heart attack and a quadruple bypass.

However, this shortcut takes me via a building and if you know anything about how they design hospital buildings, it’s to maximise confusion. They’re always such a maze. Fortunately I see a hospital volunteer I know and she kindly points me to the lift and I’m out. A lift strikes me as a great alternative to climbing Everest. Perhaps this detour wasn’t such a bad idea after all. I was lost but now I’m found but already late.

Phew! I arrived and there’s a queue at reception.