There are time you REALLY don’t want to run into someone you know and being seen photographing a doll in a cemetery could very well top the list.

You see, rewinding back to Monday, I am still on my way home from my train trip to Surry Hills and the medical appointment, which really was the reason for the whole trip, not the deviation I’ve portrayed it.

You can read about the train trip down here: https://beyondtheflow.wordpress.com/2015/08/19/me-myself-i-writing-a-complex-character-profile/

And the trip from Surry Hills to Gore Hill here: https://beyondtheflow.wordpress.com/2015/08/20/surry-hills-to-gore-hill-sydney-a-hill-climbing-odyssey/

So, I go to my doctor’s appointment and am told I have mild Barrett’s Disease, caused by reflux. They change my medication but are concerned about the stomach acids damaging my lungs and so they want to see me in a month and there’s talk of a small operation. On the upside, the tell me that I won’t need another endoscopy for two years. However, it was looking like I wasn’t going to need another one at all.

One thing is certain. No more chocolate or other snacks just before bed! I don’t drink. I don’t smoke and yet again my one vice comes under attack. What did I ever do to deserve this? Humph! Sometimes, I swear the Wowsers* are out to get me!

I haven’t really given the latest too much thought but there are a few warnings there. The most obvious being “see you in a month”. That’s not a good sign. That’s doctors’ speak for: “Danger, Will Robinson!”

It’s no wonder I’ve been posting quirky photos on my blog…distraction.

The bride doll on the train.

Anyway, as you might recall, I bought a vintage bride doll for my daughter from the Salvo Store in Surry Hills and I’m lugging her around in a huge Ikea bag along with a chenille bedspread and a cookbook, despite the long trip home. I’m someone who takes their bargains seriously but even I thought it was a bit mad trying to lug this lot up hill and down dale and on multiple trains…especially as I’m not exactly well. 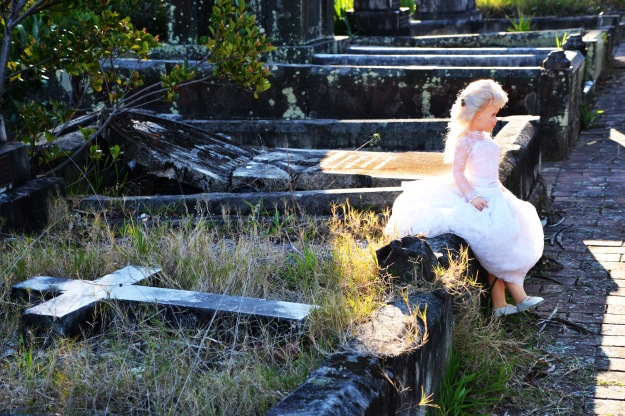 One of my attempts to create a ghost.

But these are the sort of feats which build resilience and it could just be that one day that resilience could save my life…if it hasn’t already.

Anyway, not unsurprisingly, there’s an old cemetery just across the road from the hospital: Gore Hill Memorial Cemetery. Established on 19 May 1868, the first body was interred in 1877 and it closed in 1974. I have a few relatives buried there, although I’ve never found their graves.

These days the cemetery is almost used as a park and there are park benches and in Spring, the place comes alive with a diversity of flowers. 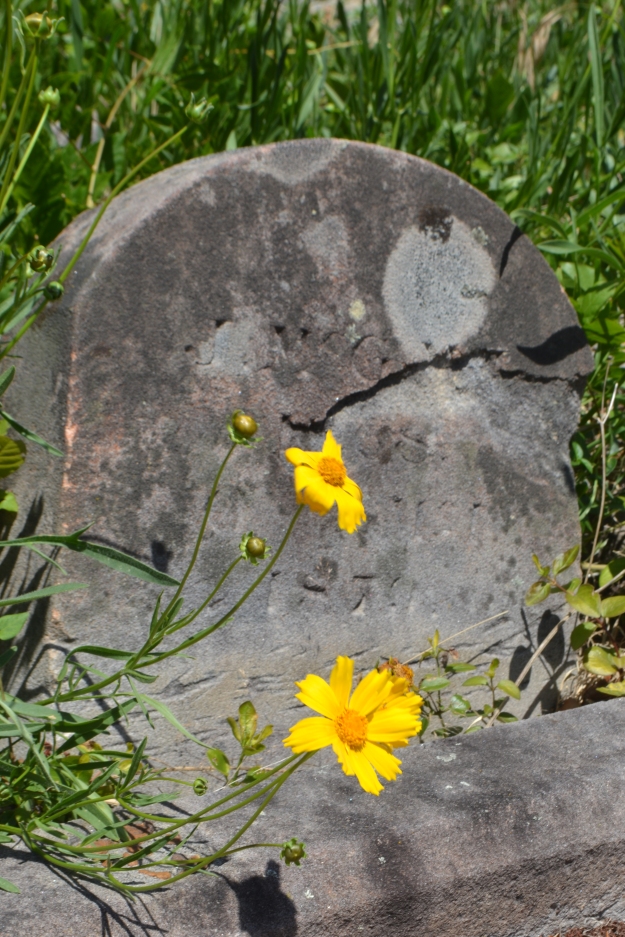 Anyway, since I was walking past, I thought I’d photograph the bride doll, which I have since named Lucinda, in the cemetery. I wondered if she would come out looking like a ghost with the long white dress and I thought there might be some good backdrops as well, given the age of the place.

However, even though we are at the tail-end of Winter, very few flowers were out but photographic conditions were perfect so I decided to mostly just take advantage of the light.

This one looks quite eerie, especially with a bit of help from Photoshop.

While I find the idea of taking photographs in the cemetery intriguing, I am, of course, mindful that these are not just names etched in stone but the remains of loved ones, which need to be respected.

So, after a few photos, Lucinda and I caught the train home and I was able to find out a bit more about her on Google. She is a Mighty Star Doll and was made in Canada during the 60s or 70s. I am thinking that she might have been used to model wedding gowns. I’m not sure. The clothes have actually been sewn onto her. If anybody knows more about her, I’d love to know.

It’s also a bit intriguing how she came to Australia. No doubt brought over by a little girl or perhaps brought back here as a gift.

Hard to believe how much I managed to cram into one day and how many new ideas are peculating around inside my head.

There is such a thing as creative overdrive!

*Wowser: In Australia, it is a derogatory word denoting a person who saps all the fun out of any given situation. Derived from the temperance movement in Australia and New Zealand at the turn of the C20th, when it was hurled as an accusation towards conservative teetotallers who were too prim and proper to relax and socialise, it has become a more generic term that can be assigned to any straight bore lacking a sense of humour, especially petty bureaucrats and Aussies politicians. http://www.urbandictionary.com