The prodigal son has returned from the Australian Scouting Jamboree in once piece. At this point, it’s yet to be determined whether the rest of him has returned. However, pack, day pack and stretcher have all been accounted for. We’re letting him settle in tonight before further investigations begin in the morning.

Of course, right on pick-up time, there was a severe storm warning. Deep purple clouds invaded what had been an azure blue sky and Geoff even rang me from work asking me to get a lift up and he’d meet me there. He didn’t want me driving through it. When we pulled up, the rain was absolutely bucketing down with huge raindrops which had truly soaked up the moisture on this stinking hot day. Then, just when their coach appeared, the rain magically stopped. Amen to that!

I don’t know what to expect at such “airport” scenes. Do you run towards each other having some kind of head-on collision… the hug to end all hugs? Or, do you go for something more restrained? Even give the lad a manly handshake? I usually go for the more enthusiastic, demonstrative: “Mum you’re so embarrassing” approach. However, what with the rain, a pile of kids getting off the bus and other parents and stacks of bags to wade through, in the end I was just grateful to spot our boy and have him back safely and sitting in the back seat of our 1963 Morris Minor…”Morrie”.

I’m sorry that you haven’t been formally introduced to Morrie. He’s my husband’s toy, bought while other families are trading up to larger 4WDs which can fit the kids, their friends, dogs, bikes. As you could imagine, Morrie is unfashionably small and very much a “one family car”.  As he’s a manual, I can’t drive Morrie and take it from me, the driving public is better off! Morrie’s something of a celebrity and it takes Geoff ages to get petrol. However, rather than being a babe-magnet like you’re usual midlife crisis vehicle, Morrie usually attracts seniors who learned to drive on one. Sometimes, Geoff’s been gone so long, I’ve almost filed a Missing Person’s Report by the time he gets back.

Anyway, picking up Mister was quite different to what I’d expected. He was a lot more awake and talkative. There were hugs all round, he posed for photos and collected his gear while we thanked leaders, exchanged catch up and renovation horrors with other equally mad parents who’ve spent what could have been a relaxing 12 days, painting and trying to tame domestic hell.

I don’t know what I was expecting. He sort of looked the same and yet sort of not. Has he grown? I mean physically. There’s no doubt after all those activities, which will no doubt slowly drip feed into conversation, that he’s grown exponentially mentally, psychologically and character-wise. I am incredibly intrigued to see quite how. But is he taller? I couldn’t be sure.

Aside from greeting the lad, there were two big questions:

We gave him the option of room or dogs first and he chose the dogs.

Of course, I’d expected both dogs to jump all over him and almost combust with excitement. They’ve clearly been missing him and last night Bilbo was lying on his bedroom floor looking quite dejected. I thought they’d be thrilled to see Lazarus rise from his supposed grave and burst through the front door alive and well.

Lady, our 3 year old exuberant Border Collie x Cavalier is a real social butterfly and loves affection and company. Every morning, she bursts through the door and I can’t wait to see you. She jumps all over you, showers you with affection and you hear this tap tap tap as she whacks her tail on the floor. As you move closer, her tail even speeds up, which really is so endearing. Makes you feel incredibly loved and appreciated. Bilbo, our 9 year old Border Collie, is more of an introvert and definitely takes time to warm up to new people. He’ll wag his tail but he’s much more reserved.

However, having Mister arrive home from camp wasn’t supposed to be some kind of experiment or investigation into dog behaviour and it’s been quite awhile since I’ve really given the dog’s personalities a second thought.

BUT…The dogs weren’t combusting with excitement when Mister arrived home. Rather, they gave him the cold shoulder and all but ignored him completely. There was no jumping, tail wagging and barely a hello. After a very long, awkward pause, Bilbo unenthusiastically wandered off, retrieved his ball and finally gave Mister an extended sniff. It was almost liked he’d forgotten who Mister was and didn’t quite know who this new boy was. Where did he come from? Perhaps, Bilbo thought he’d seen a ghost!

Or, perhaps it was a case of: “Where have you been? I thought you were dead. How could you put me through such hell?” 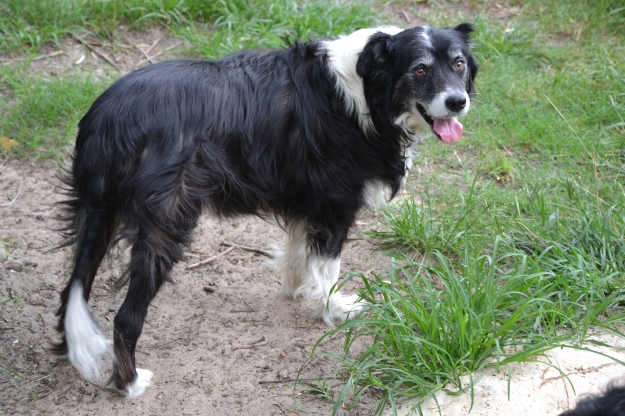 If you’ve ever read the Parable of the Sower, Bilbo was definitely playing the part of the aggrieved older brother …especially when I opened up a box of chocolates and we had pizza for dinner and the prodigal son ate up and the dogs missed out. “That’s some reward for being loyal,” they groaned,  muttering something about being unappreciated, exploited, neglected. I’m sure you get the general idea.

Anyway, now it was time for the big Bedroom Reveal. Mister said I should have had a red ribbon and a pair of scissors. Hadn’t thought of that. I’m sure I have some red ribbon and a gold pair of Eiffel Tower scissors somewhere but I’ve filed them somewhere safe, no doubt never to be seen again! We’d just have to proceed without ceremony. Well, I did remember to have his Ed Sheerin CD playing.

So, we opened the door and there were no jaw drops, leaping through the roof with excitement like he’d just bought a Toyota (Oh what a feeling!) but did say it: “looked good”. After battling crooked walls and misplaced power points just to retro fit the skirting boards, Geoff couldn’t resist pointing out the new white skirting boards. He also pointed out a certain hole in the wall, which had experienced a “divine healing”. Mister listened and knew we’d worked hard on the room but now that the work was done, it looked like the room had always been this way. The result looks so natural, that it doesn’t seem new. Now, perhaps the shock is looking back on how it was.

How could we let it be for so long and yet did we have a choice?

So, how was Jamboree?

It’s going to take time for all the stories to peculate into conversation but I’m doing my best to help him capture these memories of a life time.

Meanwhile, it looks like someone found it in his furry heart to forgive!

The Boy and His Dog.

8 thoughts on “Return of the Prodigal Scout.”