Welcome to another Weekend Coffee Share and we wish you all a very Happy and Blessed Easter!

It’s already Sunday here in Australia. Would you mind please waiting for a minute. I’ve been to Church. Had a coffee but I need to bite into the Cadbury Crunchie Bunny that’s calling my name. Actually, that might be the other way round. After all, if I  was a chocolate Easter rabbit I wouldn’t be calling out to get eaten. Oh no! I’d quietly exit stage left without making a sound.

Yum! That’s soooo good. Nothing like biting a bunny’s ear off, although now that my daughter has live rabbits in her class room,  I’m supposed to be nice to rabbits. This is a crisis of conscience for me. As much as I love those cute fluffy bunnies as individuals, as a species, they’re not my friends. They’ve done catastrophic damage to the Australian landscape and are a pest. They do not belong here.

So what are you doing over Easter?

What do you mean I’m only after your Easter Egg?

So, far we’ve been hibernating. I was going to try to work in some kind of scientific or technical term for hibernation but while reading through Google, I only confused myself and thought I’d better stick to plain English. Being Australian, hibernation is a foreign concept. That is unless you include falling asleep on the beach, which could be re-classed as suicide these days. People have been hospitalised for sunburn after falling asleep on the beach. In the longer term, Melanoma loves Australians and looking at the way Aussies bake themselves, the feeling is mutual.

Oops! I almost forgot to mention that we went for an afternoon beach walk yesterday with the dogs. It was so good and I don’t know why I don’t get down there every day like I used to. It was right on sunset and while the sun doesn’t set over the water here, it was still very serene. We also came across three baby bronze whaler sharks lying on  the sand, which had been caught. We kept the dogs out of the water, not that they needed to be told. Lady occasionally goes for a brief swim but Bilbo not only stays out of the water himself. He also barks out to other dogs who are swimming and tries to round them up out of the water…without getting his own paws we…of course!

This week, I’ve been preparing for the Blogging A-Z April Challenge. My theme is: Letters to Dead Poets. Like so many participants, April has crept up behind me and grabbed me by the throat when I was busy elsewhere. So, this week I’ve been head down, bum up and hard at it.

So, you could say it’s been an intense week but a rewarding one because a these letters are now becoming a book and I’ll put more abridged versions up for the challenge as these posts need to be a quick read. After all, the challenge is more of a blog fest where fidelity has nothing to do with trying to get around as many blogs as possible hoping some of these relationships will become an ongoing concern.

Are you taking part in the A-Z Challenge? If so, please let me know in the comments and provide a link through to your theme reveal. Here’s a link to mine.

Tomorrow, we’re all heading off to the Sydney Royal Easter Show. I’m really looking forward to it. This is the first time we’ve taken the kids to the Show.

Going to The Show was such a part of my childhood and I went every year without fail when it was out at the Sydney Showground which was out at the Sydney Cricket Ground. There are so many memories out there of the laughing clowns, Kewpie Dolls (which my husband just called crappy dools…Gee! No respect!) Dagwood dogs, Showbag Hall and walking around looking at animals and cattle, dogs, horses and seeing all those Christmas cakes and incredible embroidery. I can’t wait but at the same time, it’s going to be a huge day. It’s tiring for anyone but when you have a small engine, big events are daunting. 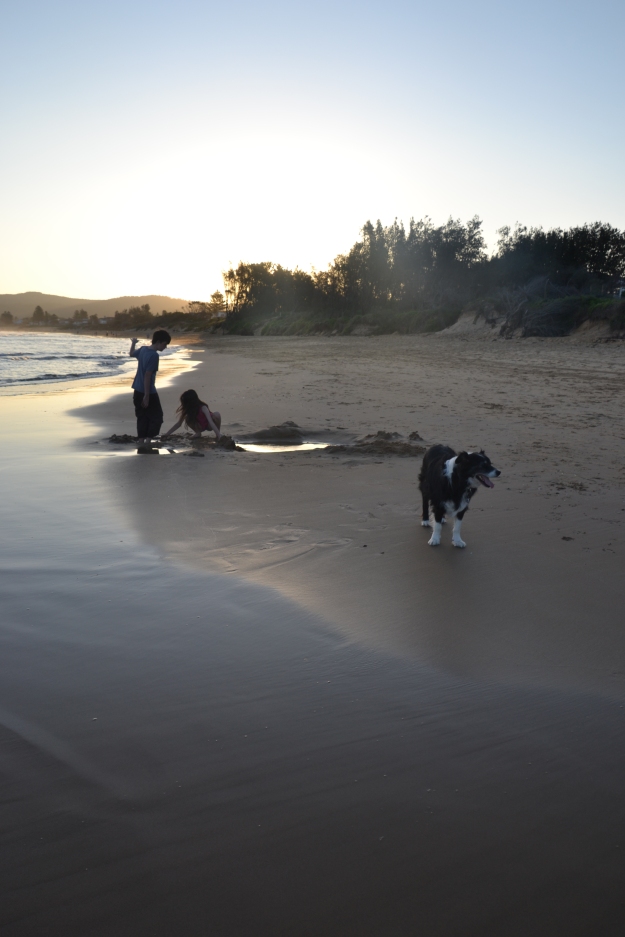 Bilbo is not so sure about the kids’ engineering exploits. “Hey, trying to fight the ocean is futile guys!”

So, how was your week? I hope you’re had a great one!

The Weekend Coffee Share is hosted by Part Time Monster and you can click here for the “Linky“.