Not sure whether you remember me. My Mum used to read Winnie the Pooh to me when I was very small and now that I’ve grown up, I’ve been reading your books and poems to my children. My favourite poems are: Vespers and Now I am Six.

By the way, in case you hadn’t noticed, my son looks quite a lot like your Christopher Robin. Indeed, he could’ve stepped straight out of the pages of your books.

Well, at least, that was: Once Upon A Time… 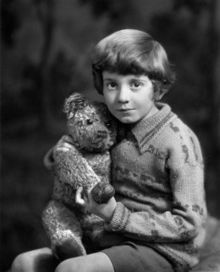 You see, he’s no longer six and we now have to double that score. That’s right! He recently turned twelve and has just started high school, which as I’m sure you’d appreciate, was quite a shock! It doesn’t seem that long ago that he was very young…just like your Christopher! I have no issues about him growing up. Indeed, I’m rather relieved that he’s not out there chasing Heffalumps and Whoozles and looking for the East Pole. That’s enough to give even the most courageous parent a series of heart attacks!

Our son looking rather Christopher Robinish.

Speaking of growing up, I was wondering why Christopher Robin never grew up? Why did you stop writing about him and telling him stories about all his toys? Why didn’t the story telling grow up with him?

It’s not that I mean to be rude but is the reader just meant to passively sit back and not share their opinions or respond to an author’s work in any way? Or, are we allowed to think? Have opinions and instead of just being written to, can we readers actually write back? Express our views?

Well, at least, I think so but perhaps I’ll disagree when I also become “an author”.

Well, being what Owl would call “impudent” and others might consider “thoughtful”, I decided to send you a poem I wrote about my son being 12. You could say that to get to this poem, we’ve doubled Now We Are Six…applying some simple calculation.

but somewhere in between…

my feet now touch the ground

though my thoughts are

somewhere in the clouds.

I look out my bedroom window

at the road which lies ahead

wondering how to get from A to B.

Do I really have to walk?

Why can’t I take a jumbo jet?

I don’t have all the answers.

Indeed, I don’t even know

which questions I should ask.

Yet, everywhere I seem to look,

all I find is rules.

This is how to do your hair!

Living by this ringing bell,

has to be a form of hell!

but somewhere in between…

why can’t I just enjoy the view

before I grow too big?

I must say that the other thing that I’ve noticed now that my son is 12 and my daughter’s 10, is that I am also being forced to grow up. Just like Christopher Robin has in a sense been immortalised as a little boy, you have also been frozen in that same time warp. You will always be that father of a young boy, bringing the adventures of his toys to life through Winnie the Pooh, Eeyore, Piglet, Tigger, Kanga, Roo and Rabbit.

Most of us do not have that luxury.

It’s been wonderful experiencing my second childhood…building sandcastles, reading picture books and driving along with the likes of Eeyore in my car.That is, being able to do all these fun things without being considered “insane” or “different different”.

So, if you don’t mind me being so full of questions, I only have a couple more.

As my kids grow up, do I really have to grow up with them? Why can’t I just veer off on my own trajectory and keep on being a kid? Do my own thing?  Just asking!  After all, don’t you still feel like finger painting and making mud pies every now and then?

I thought you might have a plan. Or, perhaps I should be asking Pooh? Despite being a so-called “bear of little brain”, he really is quite a good problem solver.

Thank you very much, Mr Milne! You’re an excellent listener!

Born 18th January, 1882, Alan Alexander Milne died on 31st January, 1956 aged 74. While his ashes were scattered, there is a memorial plaque at Ashdown Forest, East Sussex, the setting for Winnie the Pooh which quotes:

“By and by they came to an enchanted place on the very top of the Forest called Galleon’s Leap.”

Which is your favourite poem by AA Milne? Or, perhaps you relate to one of the characters from Winnie The Pooh?

Personally, I feel like I am a combination of most of his characters…quite a “soup” you could say.