Recapping on our road trip to Queensland last weekend, we had driven up to my in-laws place at Nureybar in Byron Bay’s hinterland on Friday. On Saturday, we’d  driven across the border into Queensland for a birthday picnic in a park in Surfers Paradise and went back to our niece’s hotel with breathtaking views across the beach and  nightlife (or was that wildlife?)This takes us through to Sunday morning, when we had a fleeting visit to Bangalow Markets before we headed back over the Queensland border for high tea at the Old Teahouse Gallery in Mudgeeraba.

Bangalow is a quaint historic village, located near Byron Bay in the Byron Shire with a population of 1,902.The town is 765 kilometres (475 mi) north of Sydney and 167 kilometres (104 mi) south of Brisbane, just off the Pacific Highway. The town’s name appears to have been derived from an Aboriginal word, “Bangalla”, said to mean ‘a low hill’ or ‘a kind of palm tree’- Wikipaedia.

Every time we visit my in-laws, I escape to Bangalow and after I’ve meandered through the numerous arty, fashion and food shops, I usually set up camp and write in my journal. I love each and every nook and cranny in Bangalow and if we’re really lucky, our trip coincides with the Bangalow Markets, an ecclectic fusion of Nimbin counter-culture and hippies, produce stalls, music, fashion as well as massage and other so-called “alternative therapies”. Bangalow Markets are held on the 4th Sunday each month at Bangalow Showground.

Interesting that dogs are banned from the markets in such a such an alternative community but with the heavy crowds, there’s not a lot of space.

Fortunately, our trip coincided with the Bangalow Markets but unfortunately we only had half an hour up our sleeve before we had hit the road driving North. While 30 minutes was better than nothing, such a fleeting sprint-by could only be described as sacrilege. How could I possibly see anything in a measly half-an-hour?

We spotted this split-screen Kombi at the markets.

Well, I’m a fast mover and I even surprised myself. While the rest of the crowd was chugging along on “Byron Time”, I flew past the stalls posed for photos in front of a Kombi and that was when I was greeted by a very friendly familiar face…our friend Kathy who is a local jewelry artisan. It was so good to see her and share a spontaneous and embracing hug. Wow! it was so good to see her again!! Of course, we bought more jewelry. Kathy has designed and manufactured most of my jewelry and it was really good that I was wearing one of her pieces at the time.

Catching up with my friend, jewellery artisan Kathy Bass from Peekaboo.

Although our visit was incredibly rushed and fleeting, Bangalow Markets is a place for chilling out, relaxing and immersing yourself in the region’s hippy counter-culture. However, don’t mistake it for a free ride. I go through buckets of money whenever I go to the markets. With so much creativity in one location, it’s hard not to.

Speaking of buckets, there was one trip to the markets when the heavens suddenly opened up and drowned the stalls in metres of water. Indeed, the markets were overtaken by raging torrents and I remember seeing tables and chairs buried by the heavy deluge.

I think this could be why we seemingly visit my in-laws when the markets aren’t on. Of course, we could and have visited the other local markets, especially the Byron Bay Markets, but these are a little further away.

As we leave the markets to return to the open road, I thought you’d enjoy losing yourself in these mesmerising bubbles. 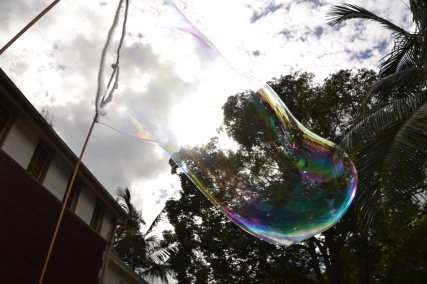 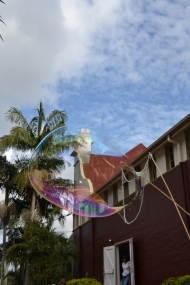 PS I couldn’t resist adding a photo of a little lemonade  stand being run by a couple of young kids and their dog.