Happy Birthday to me!

We cruised by the sea.

Then went home for tea.

Welcome to my virtual birthday party. Once upon a time, one of my friends would’ve turned up with vodka jellies and chocolate mouse, but I can offer you a Tim Tam. You could also join us to watch a great Australian movie: Oddball. It’s based on a true story of a Mareema Sheepdog, Oddball,  who saved a endangered colony of fairy penguins from foxes. We loved it.

Today, I reached the magical age of 21…again!

After opening presents this morning with the family, we set off bright and early for a history cruise along our local waterways with the kids’ Scout group. Although I’d originally planned to head into Sydney to the Koi Dessert Bar for my birthday, this cropped up and it felt like a ready-made party. We just had to turn up…perfect!

The cruise set out from Woy Woy, which is is roughly 2 hours drive North from the Sydney CBD. You might recall that Spike Milligan placed Woy Woy on the world stage, although you could say the publicity was hardly positive. He described Woy Woy as “the world’s only above-ground cemetery”.

Indeed, this is what he had to say about Woy Woy back in 1959, when he wrote a portrait of his parents’ home “Goon Fishing”:

It was founded 2,000 years ago by the lyric Roman poet Terence but gained no favour until Australians landed there in 1787 with Captain Fred Cook, then the leading agent for Cook’s tours. These tours were steadily gaining favour with rich convicts who took the waters of Woy Woy Hotel in preference to the penal settlement that charged them 10 bob a night for bed, breakfast and hanging.

Nowadays, the Old Prison has been turned into a first-class hotel with a service that any Michelin guide would be only too pleased to condemn.”

Over the last 15 years, there’s been quite an influx of commuters from Sydney, which, of course, has included us although we live about 15 minutes drive away from Woy Woy by the beach. 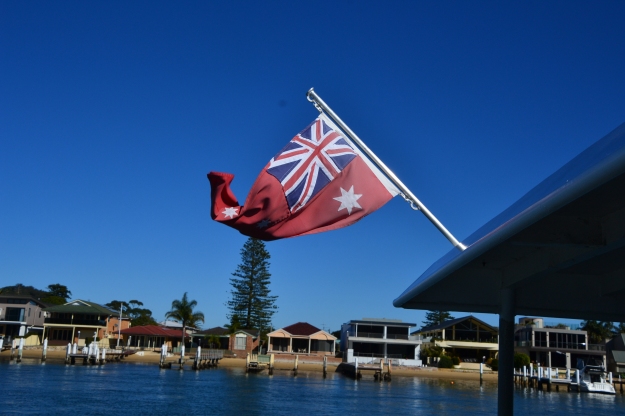 Anyway, the cruise was fantastic…just like the weather. It is the middle of Winter here and yet we had a gloriously sunny day and the sunlight was sparkling across the water creating a stunning diamond carpet. I was very torn between watching the historic photo presentation and talk and getting out there on the deck and checking out the scenery through my camera lens. That’s how I see, by the way. 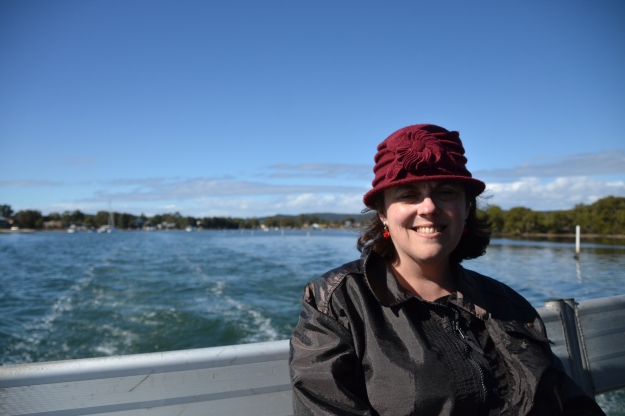 You would think that after living here for about 15 years, we would’ve done this trip before. That I’d know our local waterways like the back of my hand.

However, you know how it is. You go overseas on a holiday, before you’ve even been around your own block. Although we’d covered some ground on the Ettalong to Palm Beach Ferry numerous times before, there was a huge chunk we’d never seen. Shame on us!

The kids enjoying my birthday lunch.

After returning to terra firma, we went out for a celebratory Birthday lunch and then popped into the opportunity shop. Our lounge is in desperate need of replacement and Geoff spotted a temporary stop gap. I love delving into op shops and going treasure hunting. There’s such a a kaleiscope of colours, fabrics and styles and much more interesting than something “on trend”. Indeed, “on trend” is usually my cue to run a mile!

After laving the op shop with lighter pockets yet heavier bags, we headed off towards Patonga to find the Warrah Trig. I am theoretically dropping the kids off there for Scout hikes during the week and we decided to to do a reconnaisance. After all, it’s not just the Scouts who need to be prepared. It’s also their parents. The drop off point, is down quite a long dirt road, which is bad enough by day and I suspect, beyond me by night.Even though I’m 21 again, I’m still a bit afraid of the dark. 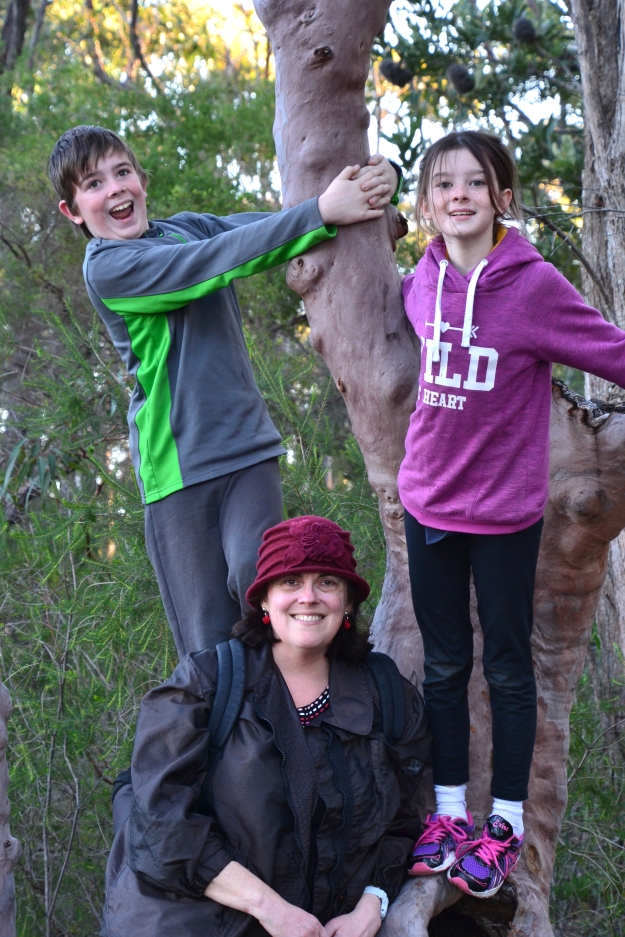 The kids and I on our bush walk. Geoff is behind the lens.

Being such a beautiful day and seeing that it was only a 500m walk to the lookout, we set off for a bushwalk. This track is part of the The Great North Walk, a 250km walking track from Sydney to Newcastle. It was initially constructed as a celebration of Australia’s Bicentenary in 1988, but some sections of the track have been used by Aboriginal people or possibly thousands of years.

We mostly walked down hill towards the lookout through towering gum trees and a splattering of wildflowers adding vibrant colour through the scrub. I was thrilled to see so much pink Boronia. It’s a personal favourite, along with golden yellow wattle. I lived out bush for a few years as a child and I used to pick the Boronia flowers and ferment them, making “potions”. Boronia has an intense fragrance and I wish I could somehow capture it so you could simply click on the link, instead of having to fly all the way to Australia to smell it.

Finally, we reached the lookout which had a breathtaking view over the Hawkesbury River. Looking East, there was Broken Bay where the Hawkesbury River flows into the Tasman Sea. Having explored the Northern end of Broken Bay and Brisbane Waters this morning on the cruise, we were now soaking up stunning views of Barrenjoey Headland, the lighthouse and Palm Beach.  The river was so serene. Naturally, it was moving but it wasn’t in a hurry. Was taking its time.

Instantaneously, I felt an unconscious weight lift off my shoulders. I didn’t even know it was there until it raised it’s wings, flying gracefully out of my body and disappearing somewhere in between the horizon and the trees.

However, unlike the river, we couldn’t take our time. The sun was very close to setting and without torches and  my mobility issues, we needed to allow plenty of time to get back to the car before dark.

The Hawkesbury River Viewed from the Lookout.

As we were heading down to the lookout, I knew that the walk back up was going to be a struggle. Unfortunately, what goes down, also  has to walk back up again. That is, unless you have Mum or Dad waiting for you at the other end to drive you home. Not unsurprisingly, I found the walk back pretty hard going at spots but had plenty of rest breaks and implemented old wisdom: “slow and steady wins the race”.

Sunset Through The Gum Leaves.

Our walk concluded at sunset, with the sun blazing through the gum trees. As much as you might think a sunset is just another sunset, for me, they never lose their magic. That intense electricity right before the sun goes off to bed…WOW!

Speaking of which, the sun has already set on another birthday and it’s time for the birthday girl to get to bed.

25 thoughts on “Happy Birthday To Me…Enjoying the Australian Outdoors.”