While the Sydney Harbour Bridge requires no introduction, Sydney’s Hawkesbury River Railway Bridge barely rates a mention. Yet, this bridge also has its mysteries.

I’ve caught the train over the bridge many times. While I usually have my nose in a book or am furiously scribbling in my notebook, I’ve often wondered about the row of abandoned sandstone pillars poking out of the water like ghostly headstones…a testimony to engineering defeat. 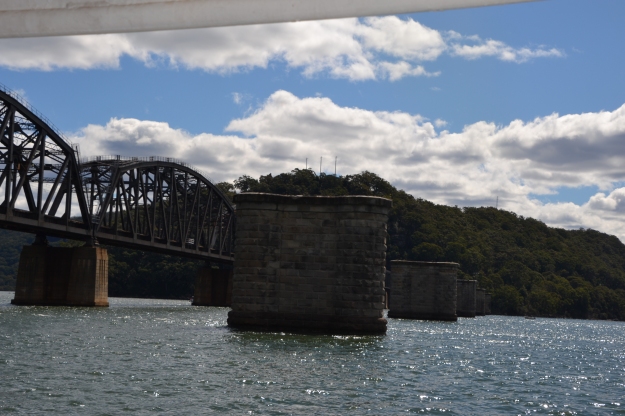 What went wrong? What is their story? Why are they there?

Yet, that’s where my queries stopped.

Fortunately, the old bridge was safely replaced  before the crumbling bridge gave way and two crowded steam trains crashed into the Hawkesbury River with a catastrophic loss of life.

The original Hawkesbury River Bridge was an engineering catastrophe doomed from the start. Indeed, it could well have been built by Basil Fawlty from Fawlty Towers Engineering! 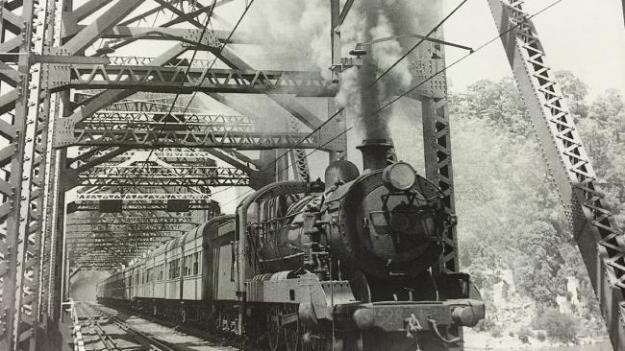 Yet, it was quite a different story when the bridge opened in 1889 to much fanfare and acclaim:

“The 1889 Hawkesbury River Bridge, Long Island Tunnel, Woy Woy Tunnel and the heavy earthworks and tunnels of the Cowan bank were the key engineering works on the Sydney to Newcastle rail link (The Short North). Together they demonstrate a high degree of engineering achievement in building a railway line in difficult and dangerous terrain. The 1889 Hawkesbury River Bridge in particular was a major technical achievement at the time: it was the fourth largest bridge constructed in the world, one of its caissons reached 49m, had the deepest bridge footing in the world and it was the longest bridge in Australia, pushing bridge design and construction techniques to the limit. The bridge was also the first of the American designed truss bridges that were introduced to Australia in the late 1880s and 1890s and thus the first to utilise the American principles of lightweight bracing, pin joints and eye bar tension members. It was the only steel trussed bridge of its type in Australia when it was built and the first major use of steel for bridges with previous examples being built in wrought iron. Its remains are tangible evidence of the change in engineering technology from British to American at this time and the decline of John Whitton’s British based design influence on the NSW railway system. There is enough extant fabric in the remaining abutments, piers and the Long Island tunnel to demonstrate the engineering achievements of the original Hawkesbury River crossing. www.environment.nsw.gov.au/heritageapp/ViewHeritageItemDetails.aspx?ID=4800130

However, cracks soon started to appear in this so-called engineering achievement and the original bridge lasted only 60 years.

So what went wrong?

This newspaper report from 1946 tells the story well.

“A chance discovery a necessitated new bridge—a discovery which probably averted what would have been the worst railway disaster on record.
A railway engineer, reading an American text book, found a statement that the interior of the piers of the Hawkesbury bridge comprised rubble.
The Chief Railway Constructional Engineer (Major-General Fewtrell) pointed out that this did not check with original specifications, which provided for metal casing on the outside and concrete on the inside, so that when the metal rusted the concrete would remain.
But the bridge had already developed an ugly pier crack, and in view of the text book statement no time was lost in scouring Australia for men who had worked on the concrete mixing board. One was found, and the information he supplied worried the engineers. They promptly set a diamond drill to work on the cracked pier. The drill made slow
progress through the stone, but once below the water level it dropped into a soft substance.
SCIENTIFIC tests showed that the steel casing would have crumbled completely away in 1939, and the interior would have quickly washed out.
Below water level the pier was several feet out of alignment on one side.
Once daily, two express trains passed each other on the bridge, often at this pier.
To counter the defect, single-track working was introduced, and speed reduced to walking pace. The new bridge was commenced as soon as possible.” 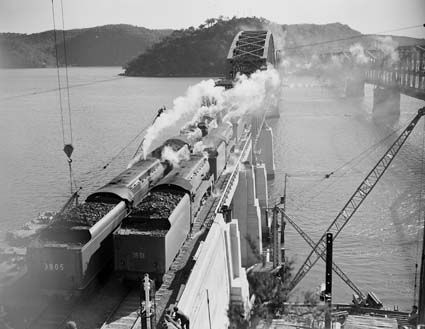 Thank goodness for that. Moreover, with a flush of national pride, this same newspaper report proudly points out that while the American built bridge only survived for 60 years, the Australian bridge would last 200 years! 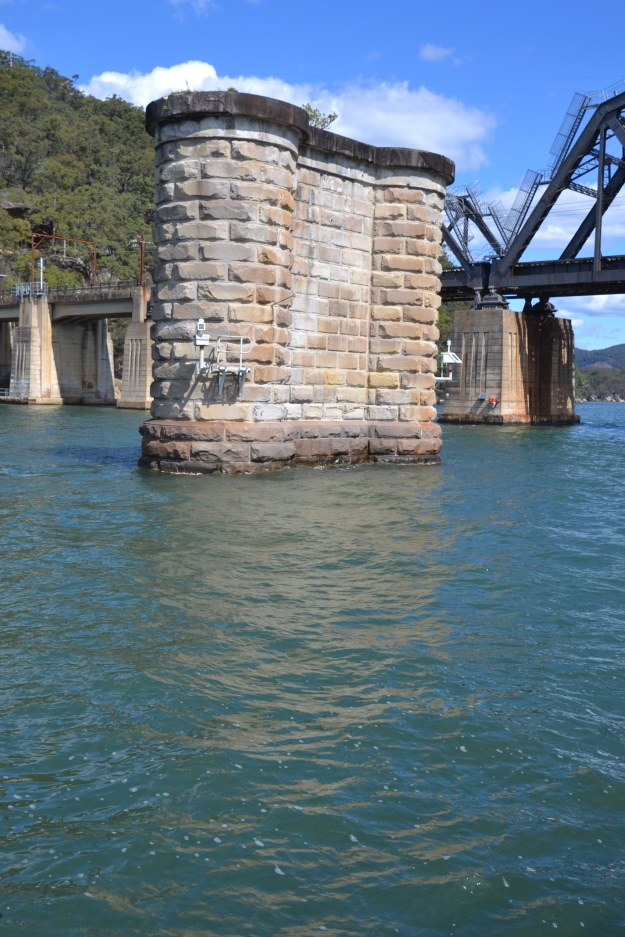 Work commenced on the new bridge in July 1940 and despite best efforts it was not completed until after the war finished, opening for traffic on 1 July 1946. 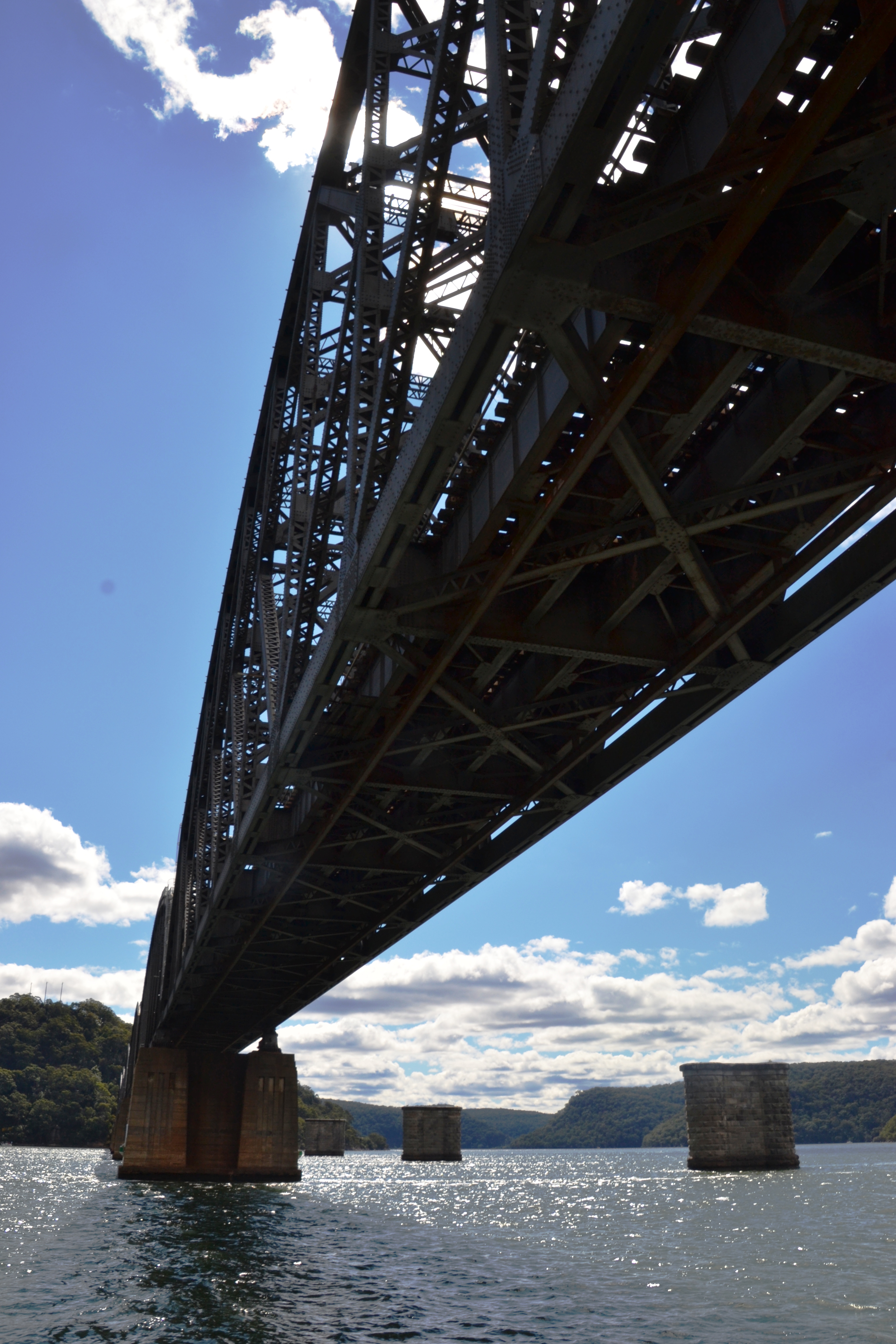 Following the opening of the new bridge,the steel spans  were floated off the original bridge, dismantled and transported to other parts of the State and re-assembled to form bridges across various waterways.
Two spans were reserved for the crossing of the Darling River at Bourke and Billabong Creek on the proposed Bourke to Barringun railway, part of the Commonwealth’s project for a north-south inland railway through the back of
Queensland, linking up with a cross-country line to Darwin.
Good to hear the steel spans were put to good use.
Meanwhile, the original sandstone piers are still standing, man-made geological features surveying the Hawkesbury
River flow by. 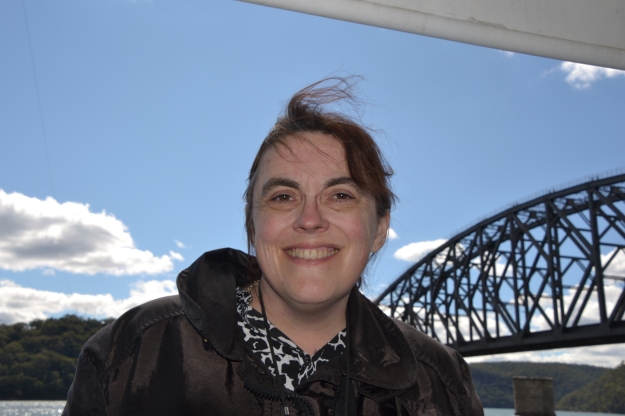