You’re just lucky that it rained. Otherwise, you’d be joining me in a tent camping at the Scout Hall right on the waterfront.

That said, I still haven’t decided whether I was lucky or unlucky the weather saved me from camping. While I was looking forward to giving camping a go and sleeping metres from the water, I did get cold feet which had nothing to do with the rain! I’ve now decided I should start off with camping in the backyard where everything but the camping is familiar.

Now, that we’ve established that we’re not roughing it, can I offer you a more civilised beverage than billy tea? In case you don’t know what billy tea is, that’s tea made in a tin pot over the camp fire.

Last week, was really hectic for me. There were a couple of tough, difficult days for my son, which have come good but they were incredibly stressful and we are still concerned about him. He is 12.5 years old and in his first year of high school and I guess that says it all. He has taken up sailing so hopefully that will provide him with a relaxing outlet to get him through the swirling vortex of pubescence. I might need to take it up too, although writing and photography are my outlets.

Thursday, I had a medical check-up in Sydney and as usual, I went off the grid afterwards. I went to the Sydney Jewish Museum to see an exhibition about Anne Frank and also a collection of letters from Otto Frank, which he’d sent to an Australian and a New Zealander who’d written to him after reading Anne’s diary. That was fantastic. Here’s the link. 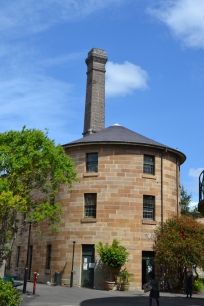 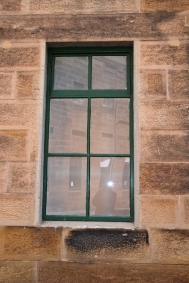 After going to the exhibition, I started walking towards Surry Hills and Central Station. En route, I stumbled across  Darlinghurst Gaol, which has been the National Art School for some time. The old sandstone architecture was very striking and intriguing and I could sense the stories hovering in the air…and a few ghosts.

I love Surry Hills and stopped there for afternoon tea, wandered through Salvo store there and a bookshop, which had a stunning rainbow-coloured bicycle parked out the front. I could almost picture myself riding it but am not so sure. It is very rainbow. 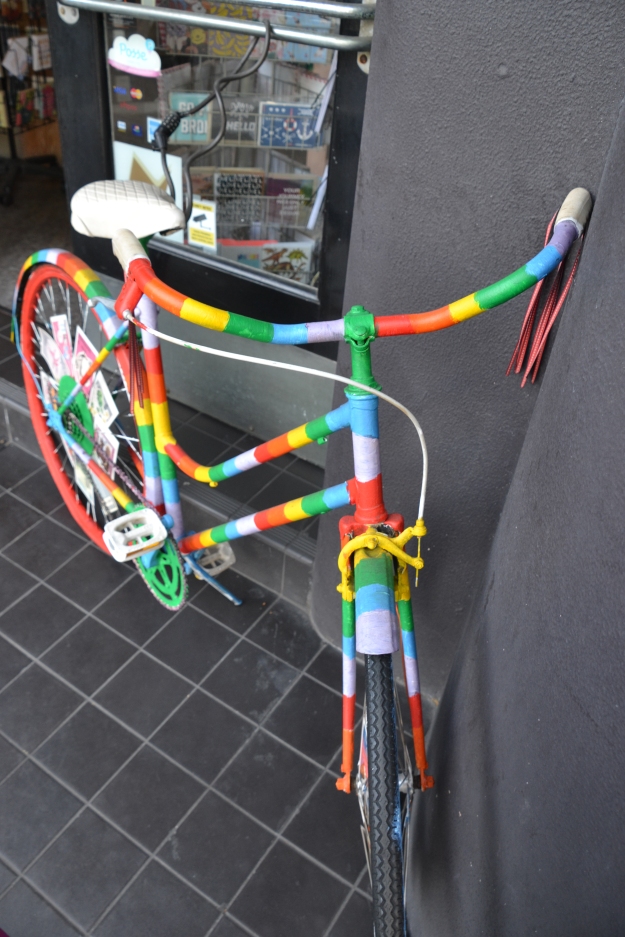 I also saw some fabulous Street art in Surry Hills: 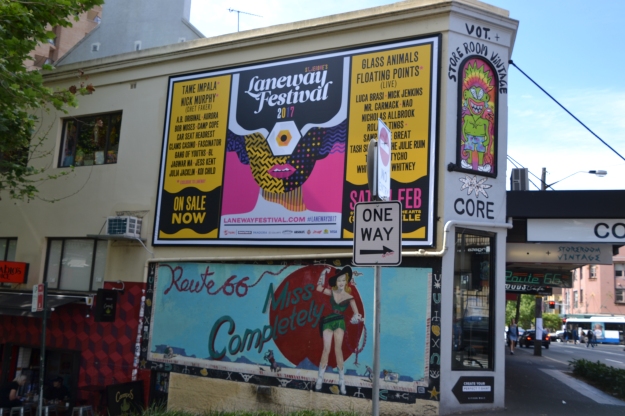 Saturday, I went down to the Scout Hall to join in with the fishing, which largely involved me taking photos and watching a few of the kids. In retrospect, I realise that I should’ve had a few lessons myself as I have no idea how to cast off and so was of little help to the kids. The kids caught a few undersized whiting and bream which were thrown back after photographs were taken but one boy managed to catch a flounder, which was exciting…not a common fish. I also spent considerable time following mother duck and her ducklings with one of the cubs. The ducklings were adorable!

Meanwhile, last Sunday we finally planted 12 of the sunflower seeds salvaged from the MH17 crash site in the Ukraine. You would be so proud of how lightening fingers here is looking after those precious seeds. A week later, seven out of the twelve seeds I planted have sprouted but one had it’s top nipped off. I am moving them out in the the sun outside every morning and then bringing them back in at night and watering them with a spray bottle. My other half-dead plants are complaining of preferential treatment as they continue to experience neglect but I have to ensure these sunflowers not only survive but also produce a bumper crop of seeds, which don’t get eaten by the birds either! It’s a big job!

Anyway, I’d better head off and start getting ready for another week. It’s now Sunday afternoon and Monday morning is just around the corner.

Hey, just wondering, if I turn back and go round the other corner, does that mean I’ll go back to Saturday and get another weekend? After all, it makes perfectly logical sense. If only this were possible, I might just be ready for another week. What do you think?

Anyway, thanks for catching up and I hope you’ve had a great week and an enjoyable weekend.

This has been part of the Weekend Coffee Share run by Diana over at Part-Time Monster and you can read the other posts by clicking here on the Linky.