Yikes! There’s something about bookshops for me, which is like the call of the wild and I am absolutely powerless to stay away. Like the children being lured away by the Pied Piper of Hameln, I am always lured in,. Moreover, shame upon shame upon shame, I almost never leave empty handed. Resistance is futile. It’s beyond my control.

Anyway, last Thursday I went on a bit of an “excursion”. To be exact, it started the moment I left the doctor’s surgery in St Leonards when instead of catching the train North towards home, I jumped platforms and was soon click clacketting my way across the Sydney Harbour Bridge, through the city and alighting at Kings Cross Station. From there, I explored the Anne & Otto Frank Exhibition at the Sydney Jewish Museum and then took a right and stumbled across Darlinghurst Gaol, which is now the National Art School. Struck by it’s imposing sandstone architecture, I HAD to explore it further especially as I had my camera with me. Before long, I was in Surry Hills, my usual stomping ground.

That’s where I stumbled across The Oscar & Friends Bookshop.

Well, in terms of budget control and not spending any money, I kept stumbling over.

Or, you could look at it on the bright side and say I only bought two books. One is a gift for my brother so I won’t give it away but the book, which I bought for myself, was very pertinent:

Tim Harwood’s Messy: How to Be Creative & Resilient in a Tidy-Minded World.

‘Utterly fascinating. Tim Harford shows that if you want to be creative and resilient, you need a little more disorder in your world. It’s a masterful case for the life-changing magic of cluttering up’ – Adam Grant

Ranging expertly across business, politics and the arts, Tim Harford makes a compelling case for the creative benefits of disorganisation, improvisation and confusion. His liberating message: you’ll be more successful if you stop struggling so hard to plan or control your success. Messy is a deeply researched, endlessly eye-opening adventure’ – Oliver Burkeman

Now, I know that when you’re a bit quirky and spend your life swimming against the flow, you can get rather excited when you finally find someone who agrees with your point of view…AT LAST!! Indeed, given the thrill of finding a so-called published expert supporting your long held philosophical stance when you’ve been as a lone ranger on a tiny Pacific atoll,  is such a relief that you don’t even question whether the author’s legit. Indeed, here’s finally the proof you’ve always been looking for that messy desks beat tidy desks. Yippee!

Anyway, as you might gather finding Tim Harford’s book is a good enough reason to smile.

However, as I’m leaving the bookshop, I spotted a bicycle, which had been painted in luscious rainbow colours and I was in heaven. 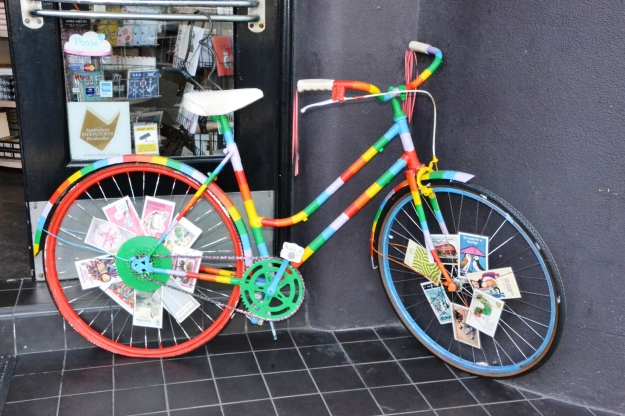 Indeed, I thought about riding that rainbow bike right up into the sky and into the heavens. That was, until I spotted the very secure bike chain.

While everyone has their own perspective of what rainbows mean to them, I love all the bright colours and how rainbows are formed by that mingling of sun and rain which must be viewed from the correct angle in what must be a fusion of magic and science.

Hmm…and now thanks to Tim Harford I can ignore all the crap on my desk until my keyboard gets buried again and a rescue mission is required.

What has made you smile this week?

This has been part of The Weekly Smile hosted by Trent’s World. You can click on the linky here to check it out.