If you have been following Beyond the Flow lately, you’ll know I’ve been retracing my steps through Paris back in the European Summer of 1992. I have photos, diaries and letters from the trip, which have been incredibly useful. However, I can now cross-reference these with Google and retrace my steps online on Google maps. Consequently, this return journey has been very intriguing, rather intense and the creative juices have been dripping all over the place.

Aside from the poetry reading I did at the famous Shakespeare & Company Bookshop, my time in Paris was overshadowed by matters of the heart. Unfortunately, we’re not talking about romance but what is known as “the Paris Dumper”(a favourite band of mind whose songs include: “A One Sided Love Affair”.)

The sweet side of Paris.

I can testify that being dumped in Paris is so much worse than being dumped just about anywhere else. After all, Paris isn’t just the City of Lights. Above all, it’s the City of Love. Can’t you just see Cupid flying over the Eiffel Tower sporting his bow and arrow? Indeed, I was quite surprised to find out that the air in Paris wasn’t pink. That Paris wasn’t a city of rose-eyed visions. Of course, if I’d ever read the fine print before falling in love, I should’ve known that heartbreak is a known side-effect and to keep a better eye out for the early signs.  So, when you’ve been dumped in Paris, you find yourself falling  from Cloud 9 straight on top of your sword. Ouch! It hurts! 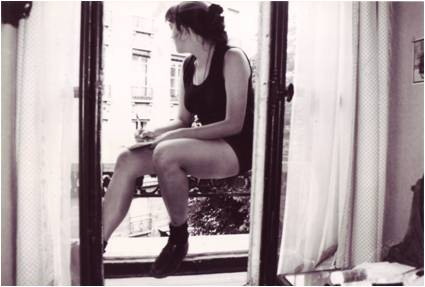 Being dumped in Paris wasn’t the end of my disillusionment with Paris either. Of course, I fell in love with the Louvre, the Eiffel Tower, the sensational Luxembourg Gardens but Paris was very noisy, over-crowded, dirty and even back in 1992 there was a very seedy, dark undercurrent. That’s before I even get to the unparalleled rudeness of the French. I don’t think they expected me to understand all the swearing!

After yet another stroll through Google last night, this sense of total and utter disillusionment with Paris even has a name…Paris Syndrome. I don’t know whether you’ll find it in the DSM IV manual but it’s not just something Google made up. The BBC has also covered it: Paris Syndrome.

Paris syndrome (French: Syndrome de Paris, Japanese: パリ症候群, Pari shōkōgun) is a transient psychological disorder exhibited by some individuals when visiting or vacationing to Paris, as a result of extreme shock resulting from their finding out that Paris is not what they had expected it to be. It is characterized by a number of psychiatric symptoms such as acute delusional states, hallucinations, feelings of persecution (perceptions of being a victim of prejudice, aggression, or hostility from others), derealization, depersonalization, anxiety, and also psychosomatic manifestations such as dizziness, tachycardia, sweating, and others, such as vomiting- Wikipaedia.

Relaxing in the Luxenbourg Gardens, Paris. These stunning gardens and green space was an urban oasis.

While Paris Syndrome is particularly linked to Japanese tourists, I distinctly remember being let down by my first impressions of Paris. As a very impressionable young Australian with a head full of dreams and expectations, I’m sure I experienced Paris Syndrome when I was there. That after studying French for six years at school, the reality was a disappointment. Couldn’t live up to the fantasy.

No doubt the effects are worse for those living some distance from Paris, where we can’t just pop over for a look-see.

Have you ever been to Paris or somewhere else where your high expectations were dashed by reality?Please share your experiences with me.