Quite frankly, you’ve got rocks in your head if you can’t find happiness at Ashgrove Farm.

Indeed, even the cows there, are said to be the “happiest cows on earth”. 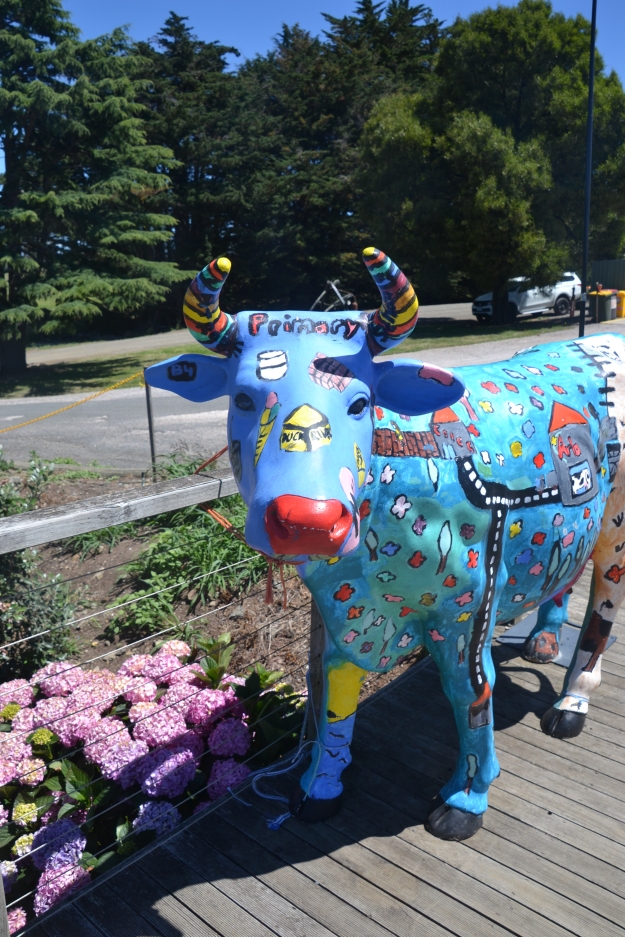 Don’t ask me how they’ve worked that out. As far as I knew, cows weren’t that good at filling out market research questionnaires, but what would I know?  I’m from the Mainland. It could well be, that after eating all that supergrass, these Ashgrove cows have developed magic superpowers,  and they’re not just smiling for the cameras anymore.

I wouldn’t know. As I said, I’m from the Mainland. 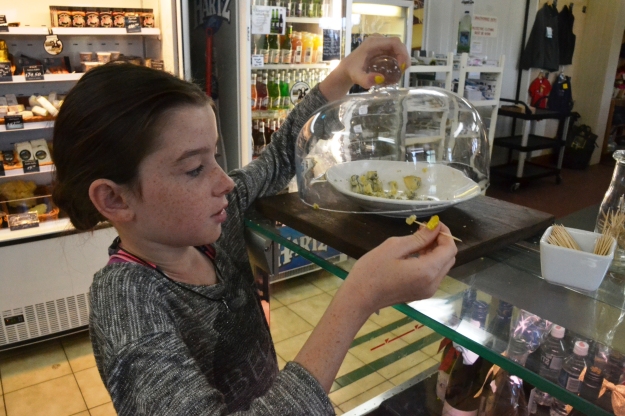 My daughter tasting the Cheese.

So, even if you don’t eat cheese, it sounds like you might enjoy the grass and you could even  add it to your salad, if you’re that way inclined.

Now, perhaps you’re a bit sceptical about these happy cows,  and your thoughts might be drifting towards a different kind of grass. However,  if you were living in Tasmania with a year-round supply of lush green grass, you’d agree that it sure beats munching of dry chaff out on the desert fringe.

As you might be aware, we spent three week getting around Tasmania in January, showing the kids “where Daddy comes from”.  The founders of Ashgrove Farm are my Father-in-Law’s cousins, but quite aside from the family connections, Ashgrove Cheese became our home away from home as we continuously restocked our cheese supplies and even loaded up the Esky for coming home. I’ve become passionately addicted to their Lavender Cheese, which is only available on the Mainland via mail order so I had to stock up. My other favourites include the Wasabi Cheese which I was adding to everything except my Weetbix when we arrived home, and a Bacon-flavoured Havarti Cheese.

If I had to differentiate Ashgrove Cheese from other cheeses, I’d say they’re deliciously creamy. When this creaminess is partnered with the Lavender or Wasabi, for example, this creaminess is cut through by these flavours for a very well-rounded and balanced flavour.

I hope my very elementary attempts at food writing there make sense. Despite being a writer and something of a foodie, I find it very difficult to write about food in any detail. I’m much, much better at eating it!.

By the way, Ashgrove Farm’s store doesn’t simply stop at cheese and there’s a wide range of gourmet treats like coconut ice, fudge, salad dressing and…(drum roll)…ice cream to die for! I particularly loved the lemon ice cream which was as white as snow  with a strong lemon flavour cutting nicely through the exceptionally creamy, smooth texture.

Humph…I’m  starting to wonder whether this virtual tour of Ashgrove Farm has been such a good idea. I’m staring longingly at their web site and banging my head against the screen. Let me in! Let me in! Or, I’ll huff and I’ll puff and …I’m now start behaving more responsibly.  Cheese addiction can become life threatening if you don’t keep yourself in check.

So, on that note, let me turn it over to you. Are you doing the April A-Z Challenge? If so, please leave a link to your A post below and I’ll try to head over. I’ve got rather caught up lately and haven’t been blogging as much.

It’s been great to catch up!

Today is the first day of the A-Z April Challenge and my theme this year is Tasmania. My husband is a -5th generation Tasmanian and in January this year we spent three weeks travelling round around Tasmania, and this is my theme for the challenge this year.