Well, on Monday morning, I had a bit of fun trading places. Instead of being behind the lens looking out, I was being filmed, inspected and watched under the microscope.

As I’ve mentioned in previous posts, our local radio station Star FM arrived at my place on Monday morning. While I was expecting breakfast radio host Rabbit to turn up, it was quite a surprise when his co-host, Julie Goodwin, Australia’s first Masterchef, pulled up in our driveway in her gorgeously cute white mini.

That wasn’t the only surprise.

Indeed, we were off to make a salad together in MY kitchen. 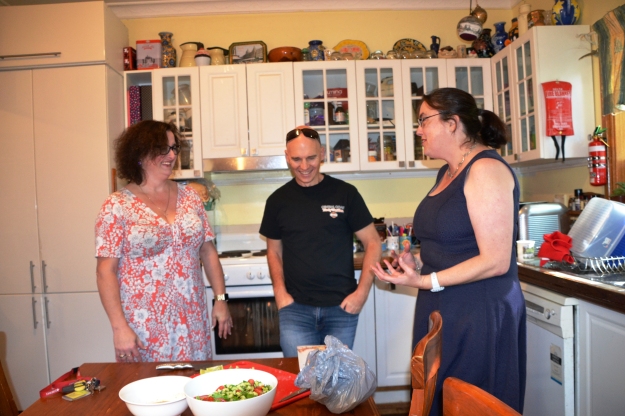 Phew! Thank goodness I was prepared. Geoff had anticipated something like this and warned me about the kitchen. So, when it was looking like I was going to need an orbital sander to remove the black ring around the hotplate, I persisted. Pulled out the big guns…Gumption, the green scourer and pure unadulterated elbow grease. Wow! My stove top could now appear in a commercial.

Or, indeed, on the radio station’s web site.

I also thank my lucky stars that I wasn’t wearing my pink, fluffy slippers.

The dogs are complaining bitterly about being left out. After going through the torturous bathing process, they feel a bit ripped off . Bilbo is particularly grumpy after trying so hard to be nice. (He’s seemingly forgotten, that he was barking so much, that he was removed from the opening scenes.)

Anyway, of course, I had to share this with you. No doubt, it will be quite weird for you to actually see me in person and hear my voice for the first time. I’d love to know what that’s like for you. After exchanging posts and comments with some of you for years without meeting, it’s actually rather exciting that you’re stepping into my real world, after being in my cyber one for so long.

In case you’re wanting to follow this story through from start to finish…I wrote a post on my blog about meeting Rabbit and Julie Goodwin when Star 104.5 broadcast from my daughter’s school. In that post, I mentioned that as much as Julie had been there for me throughout the years, she’d never brought me a meal. That was until Monday morning when Julie pulled up in my driveway with butter chicken, rice and a salad for dinner. Go Julie! The radio station filmed the whole thing and posted the footage on their Facebook page tonight. It’s already had 964 views…amazing.

You can read more about their visit Here and Bilbo’s view of it all Here Bilbo had quite a lot to say.

I hope you enjoy it!

Here’s a link to Julie’s recipe for Butter Chicken.