Yesterday morning, a wise old dog taught me a hard lesson. That as much as there is a time to be born, there is a time to die and no matter how hard we might try to fight or change the overall scheme of things, that is a hard and unrelenting fact.

It is what it is.

Yesterday morning, the kids came racing in while I was still asleep and trying to pretend it was Monday morning, crying that Bilbo our beloved Border Collie, was dead. Even though we’d taken Bilbo to the vet and knew the prognosis wasn’t good, he’d perked up a bit and we had reason to hope. Indeed, even as the news hit, I still hoped the kids had got it wrong. That he was just asleep.

As you can see, I can stretch hope beyond the bounds of reason, and well into the realms of imagination. I can even stretch it further…something I blame on being a poet.

Bilbo had died seemingly peacefully in the backyard near his beloved Jacaranda tree. He clearly didn’t suffer. That’s a relief. It should be relief enough. However, I’m human. Indeed, I’m more human than I thought, because far from being made of stone after all we’ve been through, I am emotionally distraught. I’ve cried, but I’ve also had the strength to be there for the kids and answer their questions and reassure them, as much as I could, that everyone around them isn’t about to pass away too.

We buried Bilbo in the backyard with one of his many tennis balls and I sprinkled rose petals into his grave. In other words, we gave him the same kind of send off we’d do for any family member, although his was more intimate…just Geoff and myself.

Meanwhile, I know this is going to hurt for awhile.

Another aspect to Bilbo, is that he has been quite a feature here on my blog and has even written a few posts himself and has his own extensive circle of human and dog friends. I am grateful to not only have these memories, but it means so much to have shared Bilbo with you and that you have at least come to know him in part. It is no exaggeration to say, he was a four-legged angel. He loved us so completely with every cell in his being. I have never had any doubt that he would die protecting us either, giving us such a sense of safety and security. Yet, he wasn’t your bounding extrovert. He was actually a deep-thinking, somewhat melancholy introvert. I always described him as that bloke standing in the corner of the pub keeping to himself and holding his beer. He never jumped up on anyone. That’s Lady.

Fortunately, we still have our other dog, Lady. She’s an incredibly happy dog, who is forever wagging her tail. Indeed, she was wagging her tail at Bilbo and I couldn’t help thinking that, just like me, she was telling Bilbo to wake up.

“The dog is a gentleman; I hope to go to his heaven, not man’s.”

So, when I think of Bilbo walking over the Rainbow Bridge, I hope that he’s found a fill in family with the kind of tireless energy required to keep throwing his tennis ball…time after time. With his new, revitalized energy, they’ve going to need it. 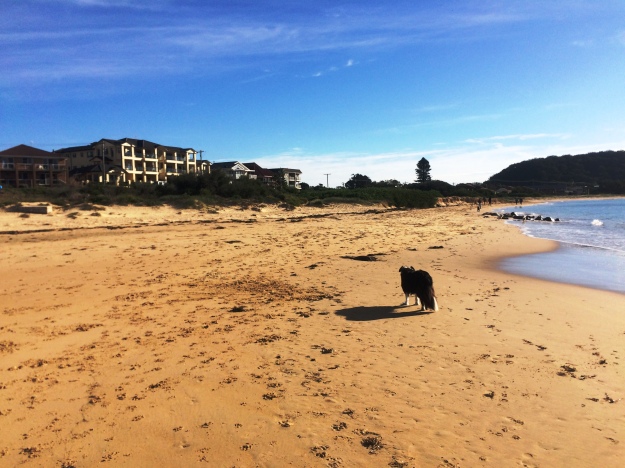 Saturday’s visit to the beach turned out to be his last. He laboured up and down the beach like an aged warrior and only managed a few laboured attempts to chase his ball. Mostly, it just rolled into the water. Lady doesn’t chase balls or sticks, preferring  to roll in dead anything instead.

39 thoughts on “Over the Rainbow Bridge…”