If you were to come over to my place for coffee this weekend, I’d be apologizing for the preponderance of crates, and random flotsam and jetsom all over the loungeroom , and recommend we head out for coffee today. I’m sure you know how it is. Once you let all that compressed clutter loose, you have a monster on your hands and it’s a massive effort to divide and conquer and finally get rid of the piles. It feels like this is all I’ve been doing in January, but that isn’t quite the truth. At least, I hope it’s not. What a way to spend the Summer holidays!

Just in case you’re living in the land of snow and ice, you might want to get changed into something a little more comfortable, and we could well head for the beach. If you’re feeling energetic, we coud also take the dogs…Lady, Zac and Rosie. Zac and Rosie are 6 month old border collie x kelpie pups and they’ll definitely raise your heart rate. They love running and are so sleek, graceful and beautiful to watch speeding through the sand. From this, you’ll understand that they’re off the leash and truly able to let themselves go. Fortunately, they are well attached to us and haven’t disappeared chasing a seagull down the far end of the beach. It happens often enough down there and it is quite a challenge to retrieve your charge. .

We’re not planning to foster any new pups at the moment. The new school year starts in a fortnight and I’m working flat out to get the kids and the house ready for the new school year. Can we get it sorted this year? We’re in much better shape than previous years, when we’ve arrived back from holidays the night before and winged it.  That was much easier back in primary school, when the kids were younger. Our daughter starts high school this year and that’s all new uniforms and we’ve had to wait for the skirt to come in. Yes, I have made myself a note. With so much going on, I’m sure my brain’s run out of RAM.

I don’t know if you’re into research at all. However, as much as people talk about being focused to succeed, research is more like following a random goat trail through the wilderness. That said, you need to leave some flags, markers or pebbles along the track, so you can find your way back to the fork in the road where you darted off.

This week, I’ve dug out my research on the Johnston’s of Islay, which I haven’t touched much for the last 15 years. This is an exploding file and I’ve achieved quite a lot on this line. Yet, there were still quite a few deadends all those years ago, which were worth revisitnig now that so much material is available online.

Of most general interest, the Johnstons of Islay were whisky distillers, and dare I suggest, heading back into the not so dark ages, that they were whisky smugglers as well. Now the story is really starting to get interesting, especially when you start hearing about distilling operations concealed in deep limestone caves. No pirates required. These were my ancestors. By the way, the Johnstons founded Laphroaig and Tallant Distilleries.

I’ve never been to Islay and a trip isn’t on the cards any time soon. So, I’m doing my best to try and get a feel for the place. Part of that, as an Australian, is getting my head around what it’s like to live in a small island community, when we live on an island CONTINENT…a land of sweeping plains.

Above: Map of Islay, Scotland. Ireland is to the South.

Trying to get some appreciation of Islay’s size, I did a bit of a comparison. Islay has an area of 619.6 km² Now, here in Australia, we think Tasmania is small. It’s also an island and Geoff’s grown up there and so we have a reasonable understanding of what it’s like to live there, adjcent to the Australian Mainland, and infamously being left off the map. Moreover, when we were taught to draw the map of Australia, I’m pretty sure that Tassie went into a one cm gap. That’s small. It’s much larger when you get there and realize there’s a hell of a lot squeezed into that deceptively small space. However, compared to Islay, Tassie’s a giant…a whopping  68,401 km². Not a useful comparison after all. Even Bali’s  more than double it’s size at 5,780 km². This leaves Singapore being the closest size comparison, measuring in at 719.1 km².

Aside from chasing whiskey smuggling ghosts and trying to get ready for the new school year, I did watch a great movie…It’s A Wonderful Life. I hadn’t heard of it before but it was on display in the supermarket and I’ve been enjoying re-watching my stash of DVDs, some of which, have never made it out of the plastic.

Have you ever seen the movie? Despite my ignorance, it’s considered a classic Christmas movie and one of the most watched American films. Well, I’m Australian so maybe that’s why I haven’t seen it. Or, perhaps I’ve just been living under a rock. ore likely, I was out celebrating Christmas, and not stuck at home watching the box. After all, Christmas is in Summer here.

To be perfectly honest, I didn’t focus on the Christmas aspects of the film. I was more interested in the plight of George Bailey who is among the town’s brightest and can’t wait to leave this one horse town and explore the world. He has big dreams of world travel, going to college and he worked dime by dime to put the money away, but there was the competing pull of the family business and helping people out. This is a pull I relate to myself. The need to be here and look after the family versus writing, travel and becoming all that I could be in myself, which could very well come at a high price. Relationships versus achievement? Do we have to make a choice? Or, can we have it all? That, I believe, is one of the great questions of our generation. 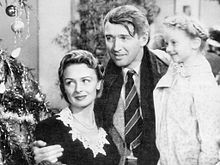 Here are afew great quotes from the movie:

Pop: I know it’s soon to talk about it.
George: Oh, now Pop, I couldn’t. I couldn’t face being cooped up for the rest of my life in a shabby little office…Oh, I’m sorry Pop, I didn’t mean that, but this business of nickels and dimes and spending all your life trying to figure out how to save three cents on a length of pipe…I’d go crazy. I want to do something big and something important.
Pop: You know, George, I feel that in a small way we are doing something important. Satisfying a fundamental urge. It’s deep in the race for a man to want his own roof and walls and fireplace, and we’re helping him get those things in our shabby little office.
George: I know, Dad. I wish I felt…But I’ve been hoarding pennies like a miser in order to…Most of my friends have already finished college. I just feel like if I don’t get away, I’d bust.
Pop: Yes…yes…You’re right son.
George: You see what I mean, don’t you, Pop?
Pop: This town is no place for any man unless he’s willing to crawl to Potter. You’ve got talent, son. I’ve seen it. You get yourself an education. Then get out of here.
George: Pop, you want a shock? I think you’re a great guy. [to Annie, listening through the door] Oh, did you hear that, Annie?
Annie: I heard it. About time one of you lunkheads said it.
Clarence Oddbody 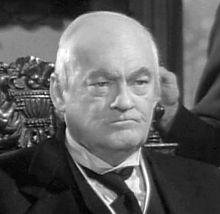 -+-
Anyway, I clearly enjoyed the movie and got a lot out of it.
Any thoughts?
Well, it’s Sunday night here and I have one pup chewing a pencil to bits and the other up on my lap. He’s managed to cohabitate with the lap top and is draped over the right arm of the chair while the laptop is perched on the left with a good gap from my cup of tea.
This has been another Weekend Coffee Share. Eclectic Alli is hosting a coffee share and Here’s the link up. Come on and join in!  We’d love to have you along!
How  has your week been? I hope you’ve had a great week and I’d love to hear what you’ve been up to in the comments.
Best wishes,
Rowena.