“If the doors of perception were cleansed every thing would appear to man as it is, Infinite. For man has closed himself up, till he sees all things thro’ narrow chinks of his cavern.”

― William Blake, The Marriage of Heaven and Hell

As you may recall, my theme for the 2018 A-Z Challenge is Writing Letters to Dead Artists. Today, we’re off to catch up with Vincent Van Gogh, the “Painter of Sunflowers”, who is equally well-known for his Starry Night and many other iconic works. I might be mistaken, but it seems to me that Vincent Van Gogh somehow opened Blake’s “doors of perception” and possibly even saw a glimpse of something in between Heaven and Earth. He was indeed a visionary genius.

If you are interested in some musical accompaniment, here’s Don McLean’s Starry Starry Night

It’s no secret that “Vincent The Man” was more beautiful, intricate and complex than any of his paintings. While his self-portraits barely scratch the surface, the inner man is best revealed through his letters to his beloved brother, Theo, an art dealer who financed his entire artistic enterprise. Indeed, these letters are considered masterpieces in their own right.

“But what is to be done? It is unfortunately complicated by lots of things, my pictures are valueless, they cost me, it is true, an extraordinary amount, even in blood and brains at times perhaps. I won’t harp on it, and what am I to say to you about it?[1]”

Yet, it is also well-known that Vincent Van Gogh had a tortured existence. That, despite the vibrant colours almost glowing in his later works, he experienced extreme hardship, failure and rejection most of his life. Indeed, he only sold one painting in his life time. That’s hard going. So, you could say that all these failures added up and that these, combined with his psychological troubles, caused him to cut off his ear and ultimately commit suicide.

Or, so the story goes…

Trying to remember when I first “discovered” Vincent, is like trying to track down the origins of a dream. There are endless stars and nebulae with no beginning. His paintings expressed an anguish, an inner-chaos which I couldn’t put into words. You see, I spent the first 28 years of my life living with undiagnosed, untreated hydrocephalus, which I jokingly call: “a harbour in my head”. In the year leading up to surgery, I experienced a myriad of bizarre neurological symptoms. So, you could almost say those swirls in Starry Night, had moved inside head. Indeed, my head was like a pressure-cooker about to explode. So, it’s no wonder Vincent made sense and somehow he cast a light out of the darkness. Indeed, it was the light of a thousand stars.

In April 1992, my best friend and I touched down in Amstersdam. I was a 22 year old Australian backpacker, and I’d just finished my university studies. It was an exhilarating time. My cocooned world of intensive study had sprung open, and I’d flown to the other side of the world. You can’t get much more liberated than that, and being in Europe for the very first time, was incredible. It blew me away.

In those early days, we not only visited the Anne Frank House, but we also went to the Van Gogh Museum. It was there, seeing Van Gogh’s paintings in the flesh, that Vincent suddenly came to life with the force of a thousand stars. That was now over 25 years ago, so much of the detail has faded. Yet, I still vividly remember how his paintings came to life. Indeed, I could swear they were moving. You know, the irises, the sunflowers… The whole experience blew my mind.

A few months later, I even visited his house…The Maison de Van Gogh in Cuesmes, Belgium near Mons. This was where Van Gogh worked as an itinerant preacher. That was yet another mind-blowing Vincent experience.

Vincent and I were growing closer… 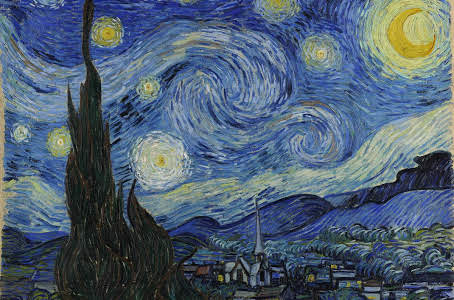 When it comes to Vincent’s works, I find it hard to pick a favourite. Of course, there’s Starry Night, but I also love his Sunflower series. I love sunflowers, but when you hear that the Amsterdam Sunflower contains 32 different tones of yellow, you’ve got to respect the mind-boggling genius of the man, and his sensitive attentive to detail. As a cafe lover, I adore Cafe Terrace At Night 1888. 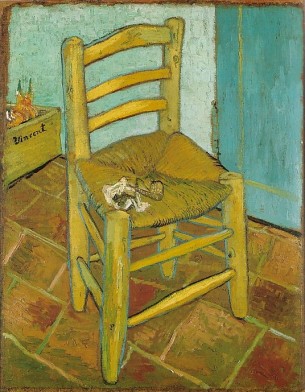 After immersing myself in all things Vincent for the last couple of weeks, I’ve also been struck by an intriguing pair of paintings: Vincent’s Chair With His Pipe (1888) (left) and Gauguin’s Armchair (1888). The two chairs are like chalk and cheese and were painted while Gauguin stayed with Vincent at the Yellow House in Arles. Vincent’s chair was comparatively simple and painted in daylight. On the other hand, Gauguin’s chair was much more sophisticated, and it was painted at night. Van Gogh seemingly hero-worshipped Gauguin and bent over backwards to prepare the Yellow House for his arrival. This included painting the first of the two sunflower paintings to decorate the walls. He also had furniture made and asked Theo to help Gauguin out of his financial woes . However, their friendship became rather tempestuous. During a heated argument, Van Gogh cut off his ear and Gauguin returned to Paris.  The breakdown in their friendship must’ve devastated Vincent.

Unfortunately, no discussion of Vincent Van Gogh is complete without addressing the psychological/psychiatric struggles which plagued him towards the end of his life. These, as you may well be aware, culminated in him cutting off his ear and ultimately committing suicide by shooting himself in the stomach. He died two days later.

Vincent was only 37 years old.

If you are a lover of Van Gogh’s and are particularly interested in his last days, I strongly recommend you see the movie: Loving Vincent. It’s now available on DVD. They have animated hundreds of his paintings in the movie, and also question whether he actually took his own life.

So, without any further ado, here’s my letter to Vincent Van Gogh: 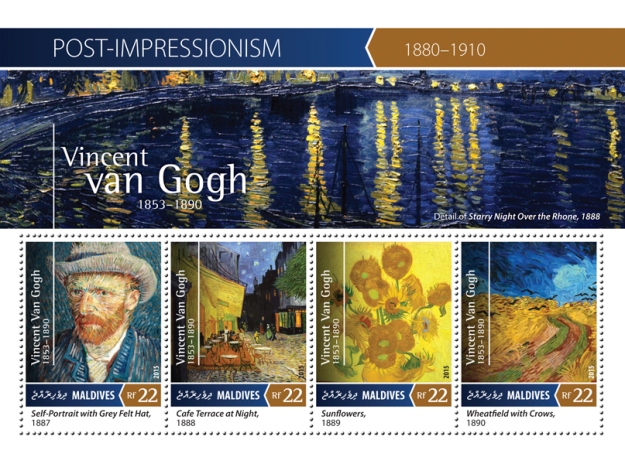 Vincent! Vincent! Wherefore art thou, Vincent? You appear before me like a dream, an apparition. Stars are swirling through a wave of blue, carrying me to a place inside my head, which exists somewhere beyond the lines.

Like you, I feverishly work away. Not for dollars and cents or immediate payment, but through a belief in something bigger. I don’t know whether you can set a dollar amount on that. Yet an artist, a writer, needs to eat and pay for their kids’ school shoes and excursions. These realities place a sense of gravity on even the most inspired imagination. That is,  unless we have no strings, no ties to hold us down to the earth, and we can just do as we please. However, that life is not for me. As much as I might crave time and space to write and “be”, I’d die in my own orbit. My family and I are one, interwoven, yet each is our own being (however that works).

Vincent, I hope you don’t mind me dredging up the past. However, there are many doubters among us, who could ironically also be termed: “believers”. I just find it hard to accept that you took your life. That after suffering for so long, why then? Your paintings might not have been selling, but you were producing masterpiece after masterpiece. Surely, you could see that. What went wrong? Indeed, I’m even starting to wonder if you even shot yourself at all. Did somebody else pull the trigger, and you wouldn’t say? Please speak up now. Send me a letter. It’s never too late.

Thank you so much for your letter. My old friend Joseph Roulin from Post Office in Arles delivered it this morning. We were both overjoyed.  Joseph’s been missing the old post office. You’re the only one who ever sends a letter around here and we’re all trying to work out who’ll be next.

By the way, I loved the stamps. Who would’ve thought!

Sorry I can’t help you with the details of my final days. I’ve put all those earthly matters behind me now.

However, I wanted to send you a fragment of a letter I wrote to my brother, Theo on the 21st July, 1882:

“What I want and have as my aim is infernally difficult to achieve, and yet I don’t think I am raising my sights too high. I want to make drawings that touch some people.”

That’s what it’s all about.

I’m not sure that I regret not finding fame and fortune in my life time,. However, it baffles me that I could be spat upon and ridiculed in life, yet hero-worshipped in death. Does that make any sense to you?