Phew! I somehow made it through the first week of the A-Z Challenge. As you may be aware, my theme for 2018 is: Letters to Dead Artists. This is a sequel to my 2016 theme: Letters to Dead Poets. This was inspired by the tradition of leaving letters on the graves of dead writers, musicians, artists in Paris’s Pere La Chaisse Cemetery which I visited with a group of friends in 1992 as a 22 year old Australian backpacker. We’d all just finished university and I was taking a year off to meander around Europe. 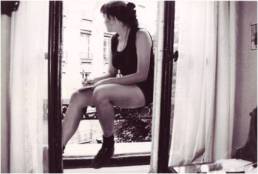 Much of the time, I lived with a family in Heidelberg Germany  who literally took me in off the street. This time in Europe forms the backbone of this series as I did something of an art museum crawl from the Van Gogh Museum in Amsterdam, to the Alte National Gallerie in Berlin; the Louvre, Musee D’Orsay and Musee Rodin in Paris, the Uffizi and Accadmia Gallerie in Florence and the British Museum in London. There might’ve been more but that was over 25 years ago.

By the way, I should also mention that my History Honours thesis looked at the arrival of modernist art and literature in Australia and how it clashed with the established cultural elites and efforts to establish and maintain a uniquely Australian culture, which was associated with the bush at the time.

We don’t often have the luxury of reflecting back on the great minds which have influenced us, and helped to make us who we are. In addition to the minds, are the compassionate hearts who’ve taken us in when we’ve been engulfed by the vortex or haunted by horrific memories and nightmares which we can’t really put into words to share with our nearest and dearest. We need a hand and I swear some of these artists, especially Van Gogh, have swept me up and carried me in their arms through hard times and cried my tears.

Another factor influencing this series, is my undiagnosed hydrocephalus, or fluid on the brain. I was 27 years old when my neurologist finally discovered the harbour in my head, which was putting incredible pressure on just about every part of my brain. Even my sight was affected, as the pressure built up behind my eyes causing nystagmus. Despite this harbour in my head, I graduated from the University of Sydney with a Bachelor of Arts with Honours in History. I spent nine months overseas, although I was very troubled much of the time. I also wrote well and used to do performance poetry. I read at a number of events in Sydney, but the climax was doing a solo reading at the famous Shakespeare Bookshop where the likes of Hemingway, Henry Miller and Anais Nin hung out in Paris. Indeed, its proprietor, George Whitman, was a character in his own right. However, by 1995, the hydrocephalus was starting to break its banks and a year later, the ground moved up and down as I walked, I was falling over a lot and my short term memory was shot. It was a huge descent straight into the abyss, especially for someone who’d always valued their brain. Was a thinker. It was a grief that had no sides, and yet my medical report promised a “full recovery”. It just took time. 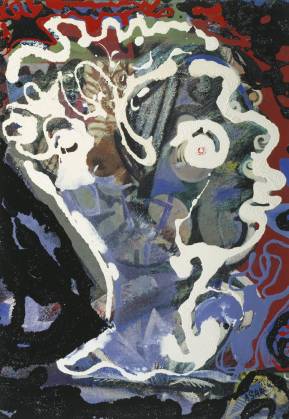 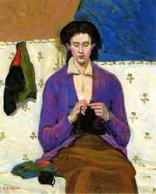 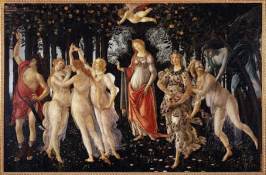 In typical fashion, my thoughts have gone off on a bit of a wander. However, you stare deeply into Starry Night, Venus de Milo, the Little Dancer, On the Wallaby Track or The Harbour Bridge in Curve, and you’ll be seeing more than sunflowers.

A- Alexandros of Antioch

When I spotted a world map printed on a cork board, a decided to plot where the artists were born and connect them with ythread of red wool, representing the Red Thread of Fate or Pinyan. Chinese mythology has it that the gods tie an invisible red cord around the ankles of those that are destined to meet one another in a certain situation or help each other in a certain way. Often, in Japanese and Korean culture, it is thought to be tied around the little finger. According to Chinese legend, the deity in charge of “the red thread” is believed to be Yuè Xià Lǎorén (月下老人), often abbreviated to Yuè Lǎo (月老), the old lunar matchmaker god, who is in charge of marriages. The two people connected by the red thread are destined lovers, regardless of place, time, or circumstances. This magical cord may stretch or tangle, but never break. This myth is similar to the Western concept of soulmate or a destined flame.

So, this red thread is now drawing this disparate group of artists from across the world, through different times in history together and who knows what will emerge from that incredible crucible. I can’t wait to reach Z, let the dust settle and see what emerges.

I apologize in advance that these are length posts. However, as you could imagine, mowing down such Everists into a few paragraphs would be a daunting task for experts, let alone a minnow like myself. However, sometimes it takes a minnow to to go where big fish fear to tread.

I hope you enjoy this emerging series.

Here are a couple of links which stood out to me on my travels:

Dear Vincent – a novel by Mandy Hager (loved it!!)

I hope you learn as much as I am from this series and perhaps consider some of the artists, great and small, who have inspired you.