Welcome to the Letter I! As you may be aware, my theme for the 2018 Blogging A-Z Challenge is Writing Letters to Dead Artists.

Unfortunately, I couldn’t come up with an artist starting with “I”. So, I had to hit the pavement. Go out on the prowl and pick one up. Since no one was throwing a party, I was back to my old friend Google, who never fails to deliver “something”.

Initially, I was going to write to Australian artist,  Jean Isherwood, who painted a series honouring Dorothea McKellar’s iconic poem My Country. However, since most of my readers are from overseas, I decided to look further afield. Finally, I stumbled across American artist, Isabel Bishop, and let’s just say there was a spark across a crowded room. She’ll be accompanied by Dolly Parton’s 9 to 5

What initially attracted me to Isabel Bishop’s works, was her paintings of young office women in New York’s Union Square. Although they’re clearly from a different era, they reminded me of myself as a young woman working as a marketing professional in Sydney’s CBD. When I look at her Young Woman 1937, there’s real determination in her eyes. She’s heading somewhere. I also felt myself drawn into Tidying Up and could well imagine myself looking in a mirror and touching up my lipstick on my way to a meeting, or heading out for Friday night drinks. Yes, these people were very familiar. 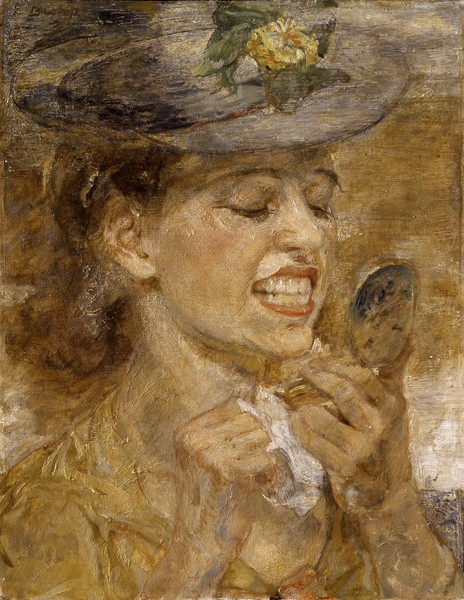 Moreover, I’ve also walked through crowded city streets. Squeezed onto over-crowded trains. While I’ve never been to New York, in so many ways, these scenes are even more familiar to me and my world than scenes of the Australian outback. I know what it is to be caught up in the rush of a thousand feet. Indeed, when I was in Sydney with my daughter the other day, I was taking photos as we walked through Central Station Tunnel. It’s a very long pedestrian tunnel and like Union Square, hosts such a menagerie of life…buskers, beggars, the homeless, vendors selling The Big Issue… There’s also that same sense of movement, which preoccupied her work. It’s a movement which I find a little scary, because it seemingly has a life of its own. You’re being pulled along or sucked through this tunnel, and there’s this suction you can’t escape. That if you fell, which for me is quite a possibility and indeed, I was using my walking stick, I’d be trampled underfoot and  disappear…a modern casualty.

Not that Isobel Bishop, portrays the subway in this way. That’s just the horrors of my own over-anxious, catastrophizing imagination and I won’t even blame the movies.

Anyway, I wasn’t satisfied with a fleeting superficial introduction. I had to delve deeper. Find out what made her tick…and tock. What was she thinking? What was important to her?

I read a few bios, but there were no quotes and no real sense of the woman behind the canvas. Then, I fortunately stumbled across an aural history interview from 1959. Yet, although this interview spanned 25 pages, there was only one anecdote which stood out:

ISABEL BISHOP: Well, for an anecdote — this is a silly thing that happened a long time ago. It hasn’t great significance, but it was rather shocking to me. I had gone to Union Square where I had been for years of making little pen drawings because I found them so refreshing to me, and I was doing this and a drunk who was next to me said something which I didn’t answer. I simply went on drawing, whereupon he got up and collected a mob, and this was a most appalling thing because I had been drawing over there and he went and got this man and others and they surrounded me like this and he said, “What do you mean by drawing my picture?” And I and he pulled my book, and his hostile crowd gathered around me, and he said, “She sells them to ‘Life’ magazine.” And I told them no, and there was no use arguing with them. They really were very hostile. So I tore the page out and gave it to him and rescued the book just simply for the sake of my own sense of things and progressed slowly toward the edge of the park. I posted myself by the side of a bench where a neat-looking man was sitting, and I began sketching again because I felt that this is my square, and if I simply shrivel — I mean I’d be routed and it would be no longer my square. This is an issue of the greatest importance. So I drew again with these people hovering around and saying , . Whereupon this man I was counting on, you know, to stand by me, got up and joined them, and “What does she mean? Let’s run her out of the square. What is she? Is she the capitalist or something equally obnoxious?” So I did leave the square and approached a policeman nearby and said, “These people have prevented me from drawing in the square.” And he said, “Do you have to draw in the square?” And he wouldn’t come back with me or do anything about it. So I felt deeply hurt and, though I still live there, I don’t draw as much in the square for it just simply hurt my feelings.

ISABEL BISHOP: That’s right. I was driven underground. I find no one watches me at all. I draw down there and nobody notices me. 1″

I’m not sure how much this reveals about Isobel Bishop the person, but it was a good story. It provides something of her, the artist behind, or perhaps I should say, in front of the canvas.

One last thing I wanted to mention, is that Isabel Bishop was married to a neurologist. That was quite a red flag to me. If you’ve been reading through this series or following Beyond the Flow, you might recall that I live with the neurological condition, hydrocephalus, or fluid on the brain. It was only diagnosed when I was around 27 and despite having an Honours degree from the University of Sydney, my mental capacity plummeted on just about every front…memory, movement, personality the works. The ambitious, career-focused young woman was dead in the water and I never really came back. Sure, I had surgery and they put in a shunt to drain away the fluid and reduce the pressure (my head must’ve been something of a pressure cooker with stew spitting out my ears beforehand.) However, I was different. As soon as I woke up, I knew someone had turned down the volume. I don’t think about this very often. The wound is still so raw, that if I even touched it with my pinky, I’m know there’d be a never-ending scream. Yet, life goes on. I became someone else. Paradoxically, in many ways, I was allowed to become myself. After all,  I really am more of a writer and creative than a business soul. Pursuing that almighty career, had cut me off from all of that.

Anyway, without any further ado, here’s my letter to Isabel Bishop…

A few nights ago, I stumbled across your work online, and was touched by your portrayals of young office girls and how you brought them to life. Indeed, you took women out of the home and opened their horizons back at time when the world was just opening up.

Thanks to these trailblazers, women like myself could launch themselves into the business world without a second thought. Well, as it turned out, there was a second thought further down the track, as we tried to launch through that invisible glass ceiling. Important principles of gender equality, like Equal Pay are still a dream.

What is wrong with the place? How can what’s between your legs determine your pay packet and your trajectory up the corporate ladder, instead of what’s between your ears and how hard you work? You don’t hear much about this anymore but occasionally the ripples rise up into a wave, and actually make it onto the news.

However, this is not my battle anymore. I’m just trying to make it out the front door. Have a coffee with a friend. Actually, seeing my friends has also become something of a pipe dream. We bump into each other somewhere for a passing chat, but who has time? Who can find a mutually vacant hole in the uber-busy schedule? How I’d love to stand around and chat to my friends like the young women in your paintings, especially without someone telling me to hurry up and putting me down for talking too much. Is it asking too much to borrow ten minutes from “mother time” to be myself?

Humph. I had no idea I was going to share all that with you. It just came out…an impromptu rant. I’m sorry, but I won’t delete it. Cover up my longings like you might paint over a mistake. I wrote it. It’s out. Let those thoughts have their own life, and see what comes back. Not everything is meant to be covered up or painted over.

Each person has their own patch of ground…their own road to walk. Not that I’m suggesting that we’re islands, but you can only ever be yourself. That’s like a symphony with so many different notes and instruments coming together, that often it becomes a cacophony, and not a song. That’s okay. We often make noise, before we find our song.

Don’t be so hard on yourself! It just takes some of us longer than others. You’ve had some pretty monstrous challenges, and yet you minimise how far you’ve come. Try to be the violinist or the dancer who has conquered the odds. Yet your capacity to write and express the challenges of the human soul, didn’t pop out of a box of Cornflakes. You made that happen. No one else.

Just because you haven’t finished that book yet, don’t put yourself down. You’re still finding your words, and getting closer every day. Your time is just around the corner. I can sense it. Indeed, you should go and get one of your notebooks and etch your name on the spine. Feel what it is to have your very own book. Feel it in your gut, your soul, in every part of your being. Only then, will you have enough faith to make it happen.

PS Stick this photo montage up on your wall. Have faith!

Skiing down the mountain at Perisher in August 2013.

Posing after our violin performance 2012. Lizotte’s is a rock n’ roll venue where the likes of Diesel have performed…and me! The music school hired the venue for our concert.

10 thoughts on “I Isabel Bishop…Letters to Dead Artists, A-Z Challenge.”