After traveling through the alphabet with the likes of Botticelli, Munch, Da Vinci and immersing myself in such incredible paintings as Christina’s World, The Scream, Picasso’s Dove of Peace, I had to finish the series off with a tribute to my very favourite dead artist…my grandfather or “Papa” who used to draw my brother and I little cartoons, which he’s stick in with a letter or card. As a kid, they were magic and they still are.

My grandparents always lived inter-state and back in those days, letter writing was a very regular thing along with the weekly phone call. My grandparents always had two telephones in my time, and there would be one on each phone so neither of them would miss out on a single word from us. In hindsight, it was truly amazing growing up knowing they loved me that much. Indeed, my grandmother said to me once, that she didn’t even care if I wrote her letters on toilet paper. So often, particularly during my teenage years, their love held me together as the swirling vortex of pubescence engulfed me in waves of angst. Family was their world and they had so much love to give. That’s particular true of most grandparents who are freed up from the demands of parenting just to love and be loved and my parents are carrying this forward.

Anyway, this is a tribute to my grandfather and his little drawings. 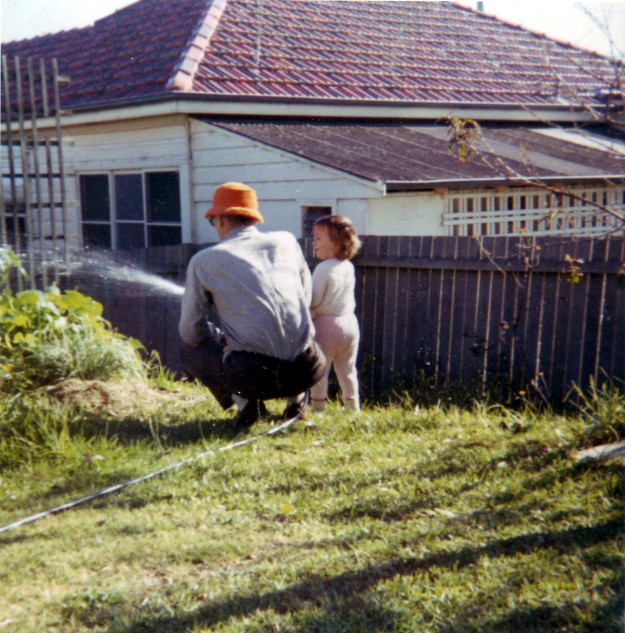 Out watering the veggie patch with my grandfather. He used to grow beans, which fascinated me as well as fresh corn. Don’t you love his orange terry toweling hat!

Life was much simpler back in the 70s and 80s. My grandparents used to post me a $5.00 note for my birthday and quite often there might be a washer or something simple in there as well. Or, perhaps that was in the Christmas parcel, which came wrapped very simply in brown paper and string, both most likely “recycled”. My grandfather’s motto was “waste not, want not”, which never made any sense to me. If I didn’t want it, I didn’t care. Indeed, it was more a case of: “Good Riddance!” Another one of his sayings was: “Die Gänse gehen uberall barfuss ” or “The geese go barefoot everywhere”. I was most surprised when I finally made it to Germany in my twenties, that most of the Germans had never heard this phrase before. Even Google was rather stumped but did come up with this: 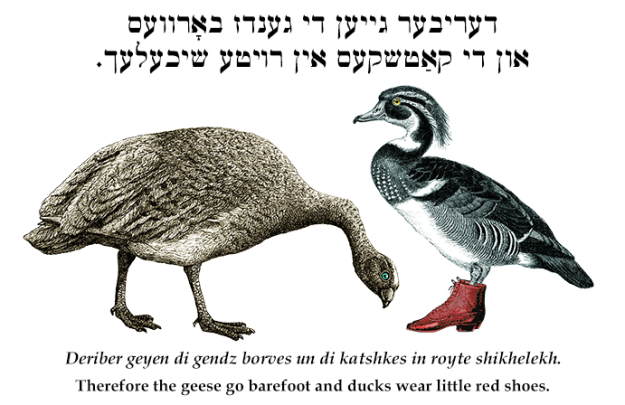 The drawing I’ve posted was drawn in 1976 when I was 6 years old and our school choir was making a record. This was a very big deal back then. My nickname as a child was “Nina and my mother was the accompanist. I particularly love the little record player he’s drawn down the front doing the recording. However, that’s not the only dinosaur in the picture. The piano is almost a dinosaur these days as well. 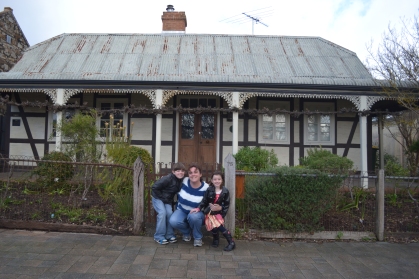 The Kids and I outside Haebich’s Cottage 2013

Above: The Kids and I outside Haebich’s Cottage in Hahndorf where my Great Grandfather was born and died. Top right… Haebich’s Smithy by Hans Heysen. The Haebich’s owned the blacksmith’s shop on Main Street, Hahndorf and it was depicted by three highly esteemed Aus tralian artists.

The other interesting thing about my grandfather, was that he was born and raised in Hahndorf, a German-Australian village in the Adelaide Hills in South Australia and he was full of crazy stories about the place, which I always listened to with baited breath. This town was populated with real characters and he real brought them and the place to life. 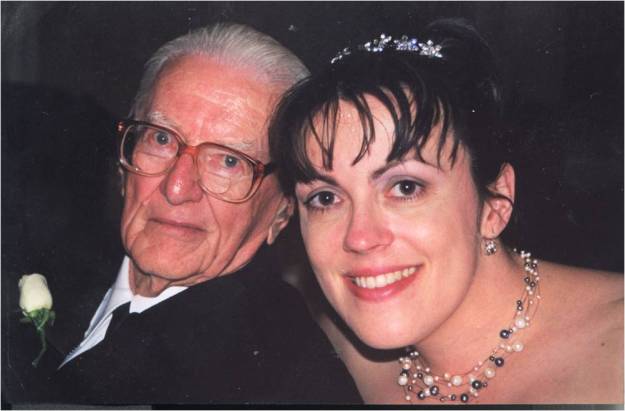 My grandfather and I taken in 2001 at our wedding, where he gave the blessing. he also gave a speech at the reception where he brought up my teenage dream of being Australia’s first female Prime Minister, a position stilll available at the time. I was so embarrassed at the time, but I came to appreciate how proud he was of me and just for being myself (as long as I studied hard!!).

That was until his memory started to fade. The stories stopped, and tragically Alzheimer’s moved in and forced him out. He was about 90 by then and reached the grand age of 95. I sometimes wonder whether his brain just ran out from over-use or whether it was just bad luck. I guess when you’re over 90, the odds are that Alzheimer’s is gunna get you. It’s unfortunately, a much too common end of a brilliant life.

So, this officially marks the end of my A-Z Series: Letters to Dead Artists. This train has terminated. All out. All change.

Many thanks for joining me and my crazy crew of artists for the journey.