“The eye, the window of the soul, is the chief means whereby the understanding can most fully and abundantly appreciate the infinite works of Nature; and the ear is second.”

After spending April cavorting round the world with a ramshackle gang of dead artists, yesterday I was stealing the eyes out of the living. Well, not exactly the living artists themselves, but rather their portraits. Or, to be exact the portraits they’d submitted for the Archibald Portrait Competition, Australia’s Premier Portrait Prize. 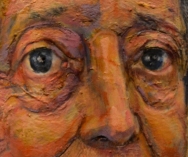 I’m not sure exactly what drew me towards zooming in and photographing the eyes on a number of portraits. However, as a person who wears glasses and is considered “high myopic”, I am perhaps more conscious of sight. As a creative, I’m also aware of this intangible thing called vision, which seems to involve seeing the unseen. Or, even having magical x-ray eyes, where you can somehow perceive the hidden bones of things.  As a photographer, I also became aware that I see so much better through my camera lens, than my own eyes. That I’m seeing with a conscious gaze, instead of being on auto-pilot.It makes such a huge difference to my powers of observation. Have you found that?

“Now do you not see that the eye embraces the beauty of the whole world? It counsels and corrects all the arts of mankind… it is the prince of mathematics, and the sciences founded on it are absolutely certain. It has measured the distances and sizes of the stars it has discovered the elements and their location… it has given birth to architecture and to perspective and to the divine art of painting.”

Recently, my awareness of sight and the eye was expanded further, while researching Leonardo Da Vinci. Once again, I was reminded of the special and very intensely detailed way he saw, analyzed and even dissected the minutae around him. Indeed, fueled by his insatiable curiosity, he also studied and dissected the eye itself. Clearly, you don’t need to be Einstein to figure out that Leonardo Da Vinci was an inspirational role model. Someone we should at least consider worthy of emulation, or in my case, it would be thrilling just to touch the hem of his garment.

However, what particularly concerns me is the impact that screens are having on our vision in the contemporary world. Eye contact is being superseded by people staring deep into their screens, as though they contained the meaning of life. So often, I see people who can’t get through a conversation without checking their messages. Indeed, they react with all the excitement of Pavlov’s dog when their phone beeps, rings or tap dances (if they have a smart phone), and place any face-to-face interaction on hold while they jump for the phone. There are people walking their dogs along the beach while on their phone. People walking through the park glued to their phones sending text messages. Cafes full of people sitting alone nattering away with their fingers, instead of doing what we always loved to do…people watching. Or, heaven forbid, actually having coffee with a friend.

What is the meaning of this loss of eye contact? What are the ramifications for our communities when our eyes are glued to our screens, instead of observing and even absorbing the world around us through our own eyes? Is humanity, and not just those with a diagnosis, losing our people skills? Will we soon reach the point where robots could replace humans, not only because the technology’s there, but also because our quintessential humanity has been switched off?

I write these warnings as though I’m immune from the screen. Yet, I’m frantically typing these words into a screen myself. However, it is a conversation I’ve had in person many times, which might’ve first started five years ago when we were my grandfather’s home town of Hahndorf, in South Australia’s Adelaide Hills. It’s a very picturesque, historic village with original German Fachwerk cottages dating back to the 1850s or so. Of course, locals live there who are caught up in the normal day to day and aren’t going to gawk at the historic features everyday like someone whose just seen them for the first time. However, I think it was while we were sitting in a cafe in Hahndorf, that I heard my very first warning about mobile phones replacing human interaction. Indeed, the proprietor pointed out this Mum who was talking on her phone while out walking with her child in the pram. From an older generation, she couldn’t understand why she wasn’t talking to her child instead.

I see oceans and wondrous lands looking in these incredible eyes.

Of course, mother’s are an easy target. I’m one myself, and I can appreciate the serious difficulty of trying to get any time to yourself. Moreover, I’ve also know the difficulties of trying to run a business and work from home while juggling a baby and seemingly dropping each and every ball. Yet, as much as we might need to make a dollar and have some intellectual and social stimulation, perhaps we could also pay more attention to where we are, even if it’s purely from a safety point of view.

Anyway, I’m sure that I don’t need to tell you, that the screen invasion isn’t just about mothers. It’s everywhere.

Fortunately, I’m not dependent on my mobile phone for work, and am one of those non-conformists who can be difficult to reach. Moreover, somewhere along the way, the phone went from being a source of connection, to becoming an irritation. I’ve rushed to the phone too many times, only to be greeted by a telemarketer. Or, it’s just getting to the climax of a show or I’m in the flow writing, and the phone rings. Indeed, it’s becoming increasingly rare that my phone rings and I’m excited when I answered it. Of course, for me, actually getting to the phone can be quite difficult, as can talking with my lung issues. So, I’ve reached a bit of a stand off with the phone. “Leave me alone”, and now we’re getting along just fine.

That said, I do have a mobile phone and when I haven’t left it at home, it’s very helpful for touching base with the family when we’re out. We can each go our own way and meet up again quite easily and there’s always that backstop. On any family outing, there’s usually somebody who wanders off. 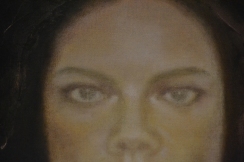 Anyway, getting back to the Archibald Exhibition, my interest in photographing the eyes of paintings was piqued a few weeks ago on my last visit to the Art Gallery of NSW. I zoomed into one of Sidney Nolan’s iconic Ned Kelly portraits, and photographed Ned Kelly’s almost googly eyes inside his helmet. They were rather freaky to be honest. My son had posed next to this painting as a five year old, and instinctively mimicked Ned’s gaze and it made for a funny portrait of our then “Little Man”. I might be his Mum, but he was just gorgeous, especially when he wasn’t walking into ancient statues, threatening to decapitate them.

“A painter may be looking at the world in a way which is very different from everyone else. If he’s a craftsman, he can get other people to see the world through his eyes, and so he enlarges our vision, perception, and there’s great value in that.”

Yesterday, I just found myself drawn into the eyes of many of the portraits, and zooming in and photographing just the eyes seemed like a natural next step. Indeed, it’s actually inspiring me to try to draw eyes myself. Seeing them all zoomed in like that, has actually made it easier to see how i could be done.

I don’t know whether anyone else has gone through a gallery picking the eyes out of the paintings before. However, that’s where I finished up yesterday and I’d like to go back and take it further.

How do artists recreate the eyes of their subject, especially when the eyes are the window to the soul and should be reflecting more than the reflection of a photographer’s flash?

Well, I have no idea. I can’t even pull of my doodle of a cube and get the perspective right. Indeed, after seeing the Young Archibald collection, I thought I’d better give up an an amateur doodler as well. “I can’t draw. I can’t paint. I’m hopeless.”

Art is intimidating, and doubt that artists even feel they’re good enough.

Anyway, I found myself drawn into the amazing eyes of so many portraits. 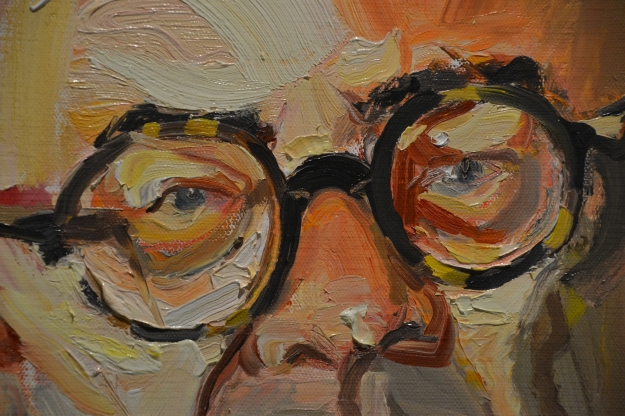 So, after viewing the Archibald finalists, I wandered through the older portraits looking for eyes to photograph there, and didn’t find much to inspire. Many of the subjects weren’t looking out at the viewer and were turning away. Few, if any, of these eyes captured me in quite the same way as the modern portraits. Indeed, I know they didn’t. I pondered that a little, and would’ve liked to speak with someone more knowledgeable about art and get their opinion. It’s not that I don’t value my own opinion and observations, but there are no embellished gold frames around my opinion, only my glasses.

I guess when it comes to appreciating your sight and not just taking everything around you for granted, that losing your sight would add an intensity, an urgency that most of us lack. The same could be said for myself. I’m already living on borrowed time, and I know what it means to carpe diem seize the day, and not let it fly off into the ether…get lost into the screen of a mobile phone. 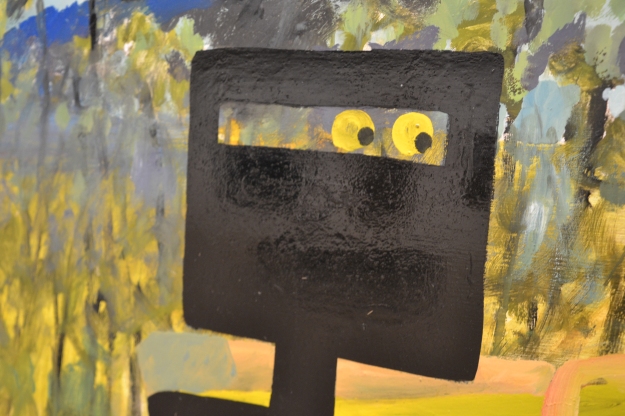 Ned Kelly’s eyes clearly popped out. However, he looks like he could be watching TV.

PS For those of you who might be somewhat artistically inclined, I found it interesting cropping the eyes out of the faces. While I’d zoomed into quite a few faces while I was at the exhibition, there were others which I cropped tonight at home and I was having to decided whether to include or exclude noses with each set of eyes. The whole process did seem rather strange, as is my current desire to try to draw/paint the eye, when the eye kind of needs a face to nestle into.

That brings me to another question. In preparing yourself to tackle something like the Archibald and pull off a portrait which gets hung, do you practice drawing all the bits of the anatomy on their own first and then try to amalgamate it all as a whole. Or, do you just go for it and hope to pull of something vaguely human which might, if you’re lucky, capture the essence of the person?

What I can tell you, is that I could really feel myself being drawn into the eyes of some of these portraits and that they truly were leading me beyond the face, the canvas and a journey deeper into their soul, or goodness knows what or even during a bit of a U-turn and heading inward. After all, there’s some sort of energy or connection bouncing back between the artist, the subject, the canvas and the viewer, although I have no idea how you’d plot that out diagrammatically, or even if you could.

I’ll be coming back tomorrow to add references to all the artworks and the artists tomorrow. It will be quite a job in itself.

8 thoughts on “Making Eye Contact at the Art Gallery of NSW, Sydney.”