This week, a new door opened up, when I stumbled across a new-to-me blog share…Thursday Doors, hosted by Norm 2.0. As he explains:

Thursday Doors is a weekly feature allowing door lovers to come together to admire and share their favorite door photos from around the world. Feel free to join in on the fun by creating your own Thursday Doors post each week and then sharing it, between Thursday morning and Saturday noon (North American eastern time), by using the blue link-up button below.

What a great idea!

Yet, there began my dilemma.

Of all the doors in all the world, which one would I choose to be my first?

Of course, it couldn’t just be any old door.

It had to be special. Personal. Tell a story.

At the same time, being the eternal procrastinating perfectionist, I also twigged that I could spend days, even years, sifting through millions of photos on my hard drive pedantically searching for the perfect door and this new opportunity would never open up for me.

Trust me. There’s no perfect door.

No perfect door photo either.

Well, I’d probably find one if I searched a bit harder, and I really should’ve straightened this photo by the smallest fraction of a degree, because it isn’t quite straight. You see, despite being a half-decent photographer I struggle to get the horizon level. There’s often a slight lean to one side. So, this photo as it stands has my personal signature. 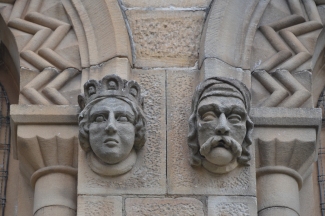 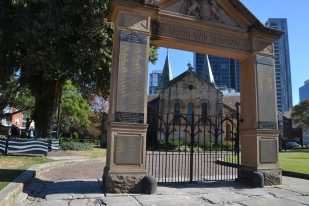 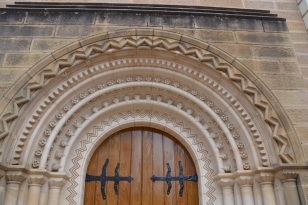 So, let me introduce you to Sydney’s St John’s Anglican Cathedral, Parramatta, home to Australia’s longest continuing church site, and one of its earliest churches. The cathedral itself was built in three main stages, St John’s Anglican Cathedral combines Victorian Romanesque style with an (earlier) pair of Old Colonial Gothic towers.  The oldest part of the current building, the two western towers, were built between 1817 and 1819 on apparently new foundations to replace the collapsed vestry. The towers are modelled on the towers of the ruined 12th century Saxon Church of St Mary’s at Reculver, Kent, England. See source.

My husband and I had a weekend away in Parramatta a few months ago and really enjoyed having a chance to explore its historic architecture. You can read more about that in: A Weekend Away In Parramatta.

Well, I look forward to knocking on a few new doors taking part in Thursday Doors and I also hope a few of you will head over there and give it a go. Here’s the link again.