This morning I was reading was reading in the Good Weekend about Keith Austen’s visit to London’s Victoria & Albert Museum of Childhood in Bethnal Green. Although I’ve been to London, I haven’t been to this museum and it was simply something interesting to read about while having my morning cup of tea and bowl of porridge. Unfortunately, coffee’s verboten as part of my daily ritual these days and I restrict myself to cappuccinos in cafes once or twice a week, where I also allow myself two spoonfuls of sugar, which are also outlawed. Mind you, just to be deliciously inconsistent, chocolate in whatever guise it arrives in, is allowed free reign. I mightn’t have the most agreeable digestive tract and I might be generously proportioned, but I’m not on life support yet. I deserve a few of life’s simple pleasures.

In between mouthfuls of porridge and sips of tea, I read about what could possibly the world’s most tragic tribute ever produced by a grieving parent. Following the death of his infant son Patrick, famed English doll maker, Charles Ernest Pierotti, made an incredibly life-like replica which is on display in a glass case at the V & A.

“To me the creepiest exhibit is also one of the most beautiful. It’s a pecularly life-like doll which lies in state in a glass cabinet, a wonderfully realized baby boy with curly blond hair and pale blue eyes. He is wearing a simple, embroidered christening gown. Then, you read the label: “Wax-headed baby doll, about 1900. Patrick Enrico Pierotti died as a baby. His father, the English doll-maker Charles Ernest Pierotti, made the dollas a portrait of him.” 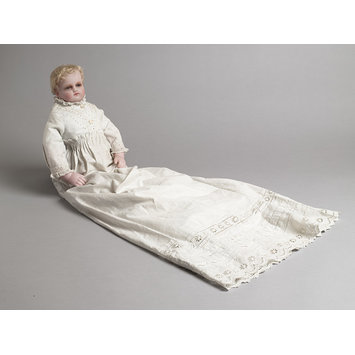 A quick Google search, took me straight into the V&A vault and I could almost reach out and and hold baby Patrick. Feel the weight of a thousand tears and their family’s grieving hearts. Most of us know someone who has endured the grief of losing a baby, or perhaps we have been there ourselves. It’s a shocker…an angst without end.

Interestingly, however, the online catalogue describes the doll in clinical detail without a drop of emotion:

“Wax portrait doll of a young male caucasian child, with blue glass eyes and blonde human hair curls inserted into the wax. It has a pink poured wax shoulder head, with a stuffed cloth body. The doll is dressed in in a long white cotton gown, with ribbon and a whitework trim and rows of tucks. There is also a cream carrying cape of cream patterned cotton, lined with cotton, trimmed with lace and ribbon ties. Long petticoat of coarse linen and whitework, a second petticoat of cream flannel. The chemise is of white linen.”

That I found creepy.

I needed to give this baby more than just a name. At the very least, a start and finish and if I could possibly ever find out, a cause of death. While child mortality was commonplace at the turn of the century, when it came to baby Patrick we have a such a life-like replica which is still in mint condition 118 years later, that I felt he deserved a word story as well as just an image. 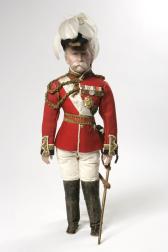 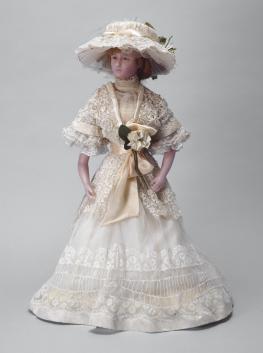 Above: Dolls made by Charles Ernest Pierotti Photos: V  & A Museum.

So, I put on my researchers cap and headed off in search of a date of birth, a date of death, which I fully expected to find during that period. However, I found nothing. Nothing official to acknowledge that baby Patrick Pierotti was ever here.

I have to admit, that I’m a bit surprised, especially when this doll made in his very likeness is in the public eye. Surely, I’m not the only one who has probed a little further and asked these questions? So, now I’m off to contact the V & A Museum of Childhood and see if they can shed any light on it, and I’ll keep you posted.

There’s something for you to digest over your breakfast or whichever meal is next on your agenda. It’s rapidly creeping towards dinner time here and I still don’t feel like I’ve fully woken up yet. It’s a miserable, rainy Saturday and after doing my morning errands, I returned to my PJs and had a balmy nap with my electric blanket on. Life is good. That said, it could be a bit more productive.

PS While researching this story, I came across an excellent post at Diyala’s blog regarding  Momento Mori: What is it? where she’s produced a very haunting piece of art featuring this baby doll.