Last week, we focused on Old Penguin Gaol. This week, we’re spreading our wings and seeing a bit more of this very quaint Tasmanian seaside village where my father-in-law was born around 1927.

Above: Brown’s Bakery. Geoff’s grandfather moved into the unit upstairs after his wife, Molly died in 1936 leaving three kids aged 9, 8 and 2 without their mother. It was also the Depression and very hard times. I had a very heavy heart visiting this place, but were very blessed when the current tenant let us have a look around inside. That’s the view of the beach through their back window, which faces right onto Bass Strait.It was such an incredibly beautiful place when we visited but it must also get its storms.

Geoff’s grandmother used to photograph her kids up against a paling fence. Here’s Geoff and the kids on the fence next to their old place above the bakery.

These photos were taken in January 2017 when we went on our first family trip to show the kids where Daddy came from. Much of this trip actually ended up being more about walking in Geoff’s father’s footsteps, largely because we were staying with friends who live out of Devonport in the North-West rather than closer to Scottsdale in the North-East where Geoff grew up. This was equally important because Geoff’s Dad passed away when he was 16 and so it’s not easy to get a sense of the man. Indeed, I really need to peer in between the lines and listen at the keyhole and yet, I am married to son. Surely, there must be parts of  I also know like the back of my hand which have been passed down? 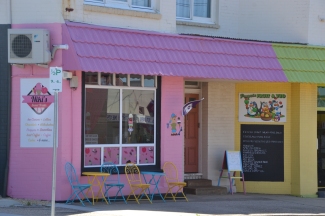 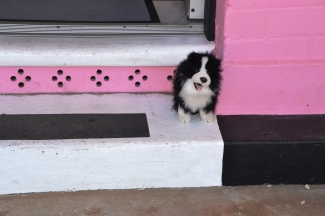 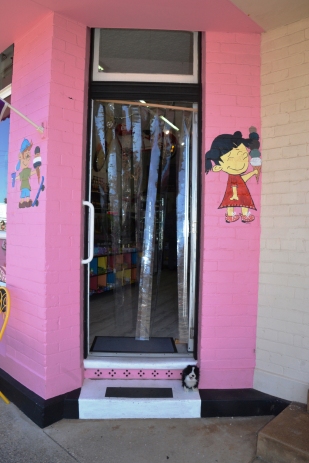 Thank goodness doors are much more straightforward. They might not always be a case of what you see is what you get and they can become unhinged or attacked by bugs, but no one’s ever felt the need to write a manifesto about the psychology or philosophy of doors. There’s no DSM manual either. A door is a door, except perhaps to the doorextraordinaire.

Above: Penguin Market is held in the former Penguin Public School grounds where Geoff’s Dad went to school. While this post is supposed to be about doors, I was struck by the view of the sky and clouds through these large windows in one of the former classrooms. I thought of Geoff’s Dad staring up at those windows thinking of his mum. It gives a whole different slant to that staring out the window so many of us have done during class.

Anyway, these photos were taken long before I’d even heard of Thursday Doors and so these are the doors which stood out to me as we walked through town, either due to their own innate appeal or a personal connection. 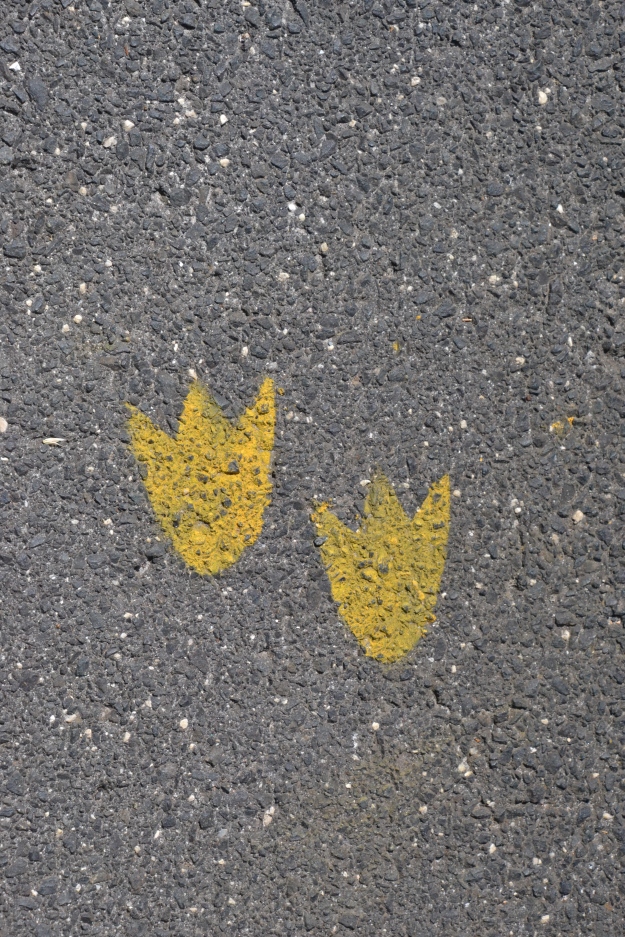 Lastly, which should probably have been firstly, here’s a map of Tasmania. Penguin is up the top to the left of Devonport where the Spirit of Tasmania sails to and from Melbourne, linking Tasmania to the mainland.

This has been another contribution to Thursday Doors hosted by Norm 2.0. Why don’t you come and join us and share a few of your favourite doors. It’s a lot of funa nd helps you see parts of the world you’ll never get to visit through the keyhole.