As a woman, it’s already difficult to put myself in my grandfather’s shoes and know what it’s like to be a man. Moreover, not having a contraption like the Tardis to travel back in time, it’s also hard to rewind the clock back to 1928 when my grandfather left school as an 18 year old.My grandfather was also Catholic and attending Waverley College in Sydney, which is run by the Christian Brothers. Back at this point in time, there was a great divide between protestants and Catholics which I find hard to imagine these days, although its still rippling away under the surface. 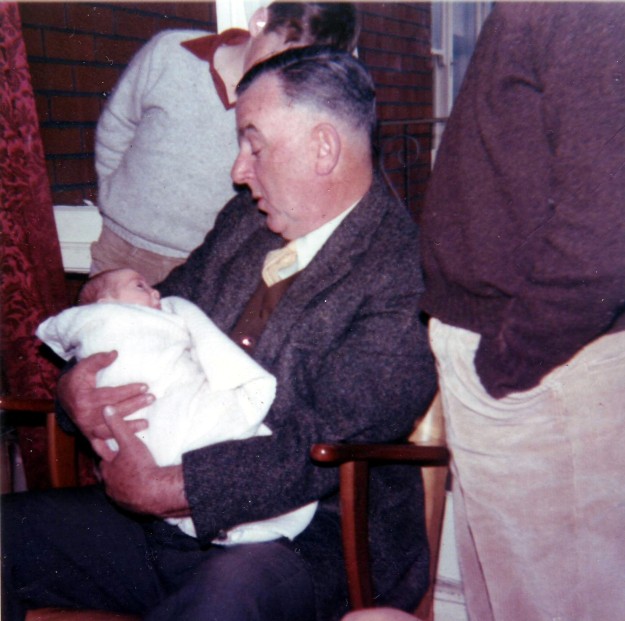 My grandfather and I.

Yet, almost 60 years later, I was also sitting at the back of the school assembly hall not paying much attention to what was being said. So, despite all these glaring differences, we were probably not all that different and had very much in common. The transition from the cloister of school into the next chapter has always been a big step.Yet, generation after generation, has gone before us. We were not alone. We have never been the first generation stepping out there trying to find out way, which I now find largely reassuring.  and I guess you just have to hope that most of them eventually found their way and as George Bernard Shaw said:

“Life is not meant to be easy, my child; but take courage: it can be delightful.”

Being a by-product of my own generation, these attempts to walk in my grandfather’s shoes, have taken me back to one of the greatest movies of all time: Dead Poet’s Society, (Indeed, it would be my favourite if Casablanca hadn’t got there first!)  For those of you already replaying the movie in your heads, I’m reminded of that scene where English teacher John Keating played by our very much loved friend and mentor, Robin Williams, is looking at the portraits of ex-students on the wall and says:

“They’re not that different from you, are they? Same haircuts. Full of hormones, just like you. Invincible, just like you feel. The world is their oyster. They believe they’re destined for great things, just like many of you. Their eyes are full of hope, just like you. Did they wait until it was too late to make from their lives even one iota of what they were capable? Because you see, gentlemen, these boys are now fertilizing daffodils. But if you listen real close, you can hear them whisper their legacy to you. Go on, lean in. Listen. You hear it?… Carpe… Hear it?… Carpe. Carpe diem. Seize the day, boys. Make your lives extraordinary.”

As it turns out, I have been able to read the words my grandfather would have heard courtesy of the old newspapers which are now online. Eerily enough, these words actually have a Dead Poet’s Society feel about them, as most of these end of school speeches do. By the way, my grandfather had attended Waverley College, Sydney run by the Christian Brothers and the Address was given by Archbishop Sheehan:

“Your years of youth, my dear boys, are very precious. It is the time in which you build for the future. The opportunities which are now close to your hands will, if neglected, never come within your reach again. Your greatest enemy is the spirit of ill-will and idleness; your best friend is the spirit of obedience and industry.

The process of building therefore of which I spoke a moment ago means more than piecing together the divers kinds of knowledge. Let us put it in this way: your task is not only to build for your-selves the house of knowledge, but also and much more to build firm and strong the fortress of the will.

‘How will you take these few words from me? I know boys too well not be be conscious that they listen to old people like myself with a certain amount of patronage, and with a secret feeling that we are out of date and possibly suffering from a touch of dotage, and that therefore any advice of ours is to be taken with a good grain of salt.

Well, it may shake you a bit to hear that the boys of every generation have had exactly the same thoughts, and that when they grew up they found their mistake. One of the chief temptations of your time of life comes from a kind of pride, from a tendency to underrate the advice of the more experienced.’ His Grace concluded by again congratulating the Brothers and the boys on a most successful year, and wished all present the blessings of the Christmas season.” Catholic Press (Sydney, NSW : 1895 – 1942), Thursday 5 January 1928, page 25

Whether you agree with the Catholic ethos or not, I found good wisdom in there. The Archbishop, who’d been born on the 17th December, 1870 at Waterford in Ireland, did a pretty good job of crawling into the boys’ shoes, seeing himself through their eyes and hopefully captured their attention. In his roundabout way, he first encouraged the boys to listen to their elders and hopefully thus avoid some of life’s predictable potholes. He also wanted them to have a heart, a love of God and be living breathing humans. He didn’t want them to be walking encyclopaedias, robots or money-making machines.  He wanted each and every one of those boys to have a rich and complex life. Catholic or not, there’s a lot of good advice to hold onto there and you can adjust it to suit your personal creed.

That is the importance of family, close friends and having meaningful relationships, which you carry with you throughout your life. Having lived overseas and travelled, I know what it’s like to be that random atom drifting through space where no one knows you, your history, or your family. Moreover, as an Australian living in Germany, there was only the odd person who knew what an Australian was either and I got away with a bit under that heading too.

While there can be real freedom and liberation in flying away from all those ties, I felt quite lost without them too. There’s a lot to be said for having shared memories within a close community where you can bump into an old friend down the street and have those shared experiences, insights and memories. We have been living in our home for something like 18 years. That’s really crept up on us and initially, it took a long time to get established. However, I now have a genuine, informed interest in the people around me. This has nothing to do with career, paying off the mortgage or even putting food on the table. However, there’s food we don’t eat and we also have to cater for our souls.

What would your advice be to a young person leaving school at the end of 2018? Any regrets? Anything you did or observed that worked well and you’d like to pass on? We’d love to read your thoughts in the comments.

PS I thought I’d better point out that these young men left school the year before the 1929 Fall of Wall Street. The Wall Street Crash of 1929, also known as the Stock Market Crash of 1929 or the Great Crash, started on October 24 (“Black Thursday”) and continued until October 29, 1929 (“Black Tuesday”), when share prices on the New York Stock Exchange collapsed. The crash, which followed the London Stock Exchange’s crash of September, signalled the beginning of the 12-year Great Depression that affected all Western industrialized countries. Wikipaedia These same men could well have fought or enlisted in WWII having had their own fathers serve in WWI. They didn’t have it easy.

5 thoughts on “Speech Day 1928: The Life Lessons My Grandfather Heard.”