For those of you in the Northern Hemisphere, I make no apologies for stealing your sunlight. However, if you’re joining me you’d better have your beverage “iced”. Although we haven’t reached a scorcher yet, the sun has had some very intense moments where we’ve definitely been back under the griller again.

How’s your week been? I hope it went well.

We’ve already hit the silly season here. On Wednesday night, I headed into the Sydney Conservatorium of Music to attend concert pianist Gerard Willems’ Twilight Recital. This was an intensely special and personal experience on so many levels, but in the end what truly made it special was Gerard himself whose heart and beautiful spirit was interwoven with the most incredible music. As you may recall, I play the violin and on many occasions, I’ve lamented my difficulties. Indeed, as I’ve struggled through a piece, I’d almost do a deal with the devil asking for just one perfect note. However, Gerard’s playing took that perfection to another level entirely. As I heard him play a series of single notes, each one was almost divinely perfect and I could almost see it wiggling it’s tail as it soared upwards to the stars. I understood then, for the very first time, that even achieving that one perfect note is beyond my human understanding. You can read mre about it Here 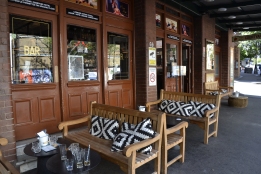 I arrived in the city a few hours early and went on a “Doorcursion” down to The Rocks, which is one of the first areas of English settlement in the country. In case you’re not too sure what madness a doorscursion entails, that’s lingo I picked up from Thursday Doors where us tribespeople go off in search of weird, wonderful and historic doors to show off to each other in the way that more regular people might show tatoos. This is only my second doorscursion. However, both times I’ve found that simply photographing doors makes me much more observant of an area. For example, I didn’t realize quite how many pubs are down in The Rocks and quite a few of my door photos ha d “Bar” or “Saloon” etched into the glass. However, as it turned out, my favourite door belonged to the Ladies’ toilet:

After indulging in a sumptuous French dessert and cappuccino, I headed up to the Conservatorium via Bridge Street. This is a route my mother used to take everyday as a student at the Con. It was funny because I noticed a big sandstone clock tower on one of the buildings and I could well imagine my mother’s horror at the time…”she was late. Late for a very important date”.  Eventually I spotted the Con up the top looking like an alien spaceship. I’m sure it’s always looked odd but what with not getting into the city very often, I now find these more English-looking buildings out of place. We’re Australian.

“It’s better to look at the sky than live there. Such an empty place; so vague. Just a country where the thunder goes.”
― Truman Capote, Breakfast at Tiffany’s

My apologies for writing about my trip into Sydney in reverse. I also wanted to share that I read Truman Capote’s Breakfast at Tiffany’s on the train to and from. I’d seen it in the bookshop ages ago bought it on account of the movie, which from memory seems quite different from the book. I know I shouldn’t be surprised, but I always am. I’d like to read study the book in more detail, but I did like this passage about belonging…or not:

“She was still hugging the cat. “Poor slob,” she said, tickling his head, “poor slob without a name. It’s a little inconvenient, his not having a name. But I haven’t any right to give him one: he’ll have to wait until he belongs to somebody. We just sort of took up by the river one day, we don’t belong to each other: he’s an independent, and so am I. I don’t want to own anything until I know I’ve found the place where me and things belong together. I’m not quite sure where that is just yet. But I know what it’s like.” She smiled, and let the cat drop to the floor. “It’s like Tiffany’s,” she said.

Wednesday night, I stayed at my parents’ place and staggered home late Thursday afternoon. Friday…slept. The trip to Sydney took a lot out of me.

Saturday, I found myself at the Sailing Club. Although I actually love sailing, I usually rate as ballast. However, now I’m needing to be the parent contact as my husband is doing a sailing course and isn’t available. This weekend was just a reconnaissance. Next weekend, Geoff’s working. I was just starting to write that I need to ensure the Flying 11 gets rigged correctly. However, there’s fat chance of that. I’m flat out just doing up my own shoelaces. He also ripped a sail last weekend and so I’m meeting up with Mr Sail Magic whose been doing a bit of sewing during the week. However, I was pleased to run into some friends who are doing the course with Geoff and it was pretty social afterwards. You can read more about it Here 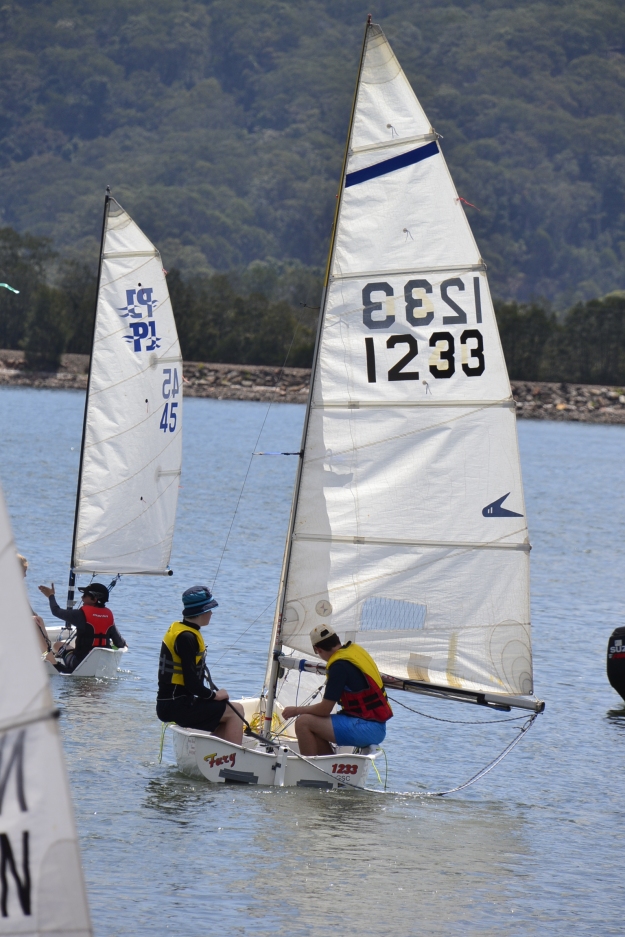 My son and crew out on his boat.

This week coming up is very stressful. While Tuesday might be the Melbourne Cup for the rest of Australia, I’m off to the Rheumatologist for a routine appointment. No dramas there except getting to and from. However, on Thursday I’m booked in for an endoscopy and colonoscopy which are not just routine but no indications of anything too dire either. I get dreadful heartburn and GIRD but was a bit anemic so they want to be careful.

So, after much fear, in trepidation and utter dread, I went into the chemist today to buy this stuff called “Moviprep”. You essentially take this stuff to clean out your bowels beforehand. This stuff is so volatile, that it’s split into two separate sachets, which you have to mix together yourself. This is all feeling very much like sticking Draino down my gob and if I wasn’t made of tougher stuff, I would’ve done the Australian thing, ignored my bowel health and run for the hills. Just to humour me a bit, when I get to the chemist, they offer me a choice of plain or orange. At this point, I thought there probably should be some kind of taste test or online review to advise us poor sods which way to go. So I asked my ever obliging Pharmacist who has seen me through many of my medical ordeals, which one he recommends. He tells me there’s the choice of revolting or really revolting and I take the lesser of two assaults on the palate…the orange. Clearly, there are no chef’s hats for this terrible stuff.

After dealing with all of that and finding out what truly awaits me late in the week, I headed into the supermarket deciding to make Mars Bar Slice and also finding out that Toblerone and Nutella are on sale. This is what I call a “preventative treatment”. Perhaps, if I eat enough chocolate beforehand, a few lingering flavours might overcome the culinary assault.

That’s a terrible place to finish up and I really should stick in some kind of good news story or a photo of a cute baby animal to sign off on an upbeat. However, Mars Bar Slice doesn’t make itself.

This has been another Weekend Coffee Share, hosted by Eclectic Alli.