Well, I have to warn you upfront that last week wasn’t the best and was actually rather difficult. However, it improved as it went on and I was filled with an over-riding sense of gratitude. An appreciation of the love and support that people have given us. I’m also quite conscious of how different things might’ve been, which suddenly made everything look rosy especially after the general anaethesetic.

It’s funny how just putting on the hospital whites makes me look like I’m on death’s door.

Last Thursday, I had an endoscopy and colonoscopy at Royal North Shore Hospital in Sydney. The results were fine and I didn’t expect anything nasty. Yet, I guess there’s always that caution when they send the camera where the sun don’t shine. By the way, I’d like to encourage anyone who has been putting off have either of these procedures to face the music. I’d heard horror stories about taking the stuff and let’s face it, most of us are rather private about our privates. However, I was knocked out for the procedure and it was worth it for the peace of mind.

However, the lead up to the colonoscopy was quite stressful. I was freaking out about stuffing up the preparations. In hindsight, they’re not that complicated but I was quite worried I’d forget and eat something I shouldn’t. However, I was on my best behaviour and a good little Vegemite after all. No dramas.

Unfortunately, one of my kids became quite stressed about the whole thing and let’s just say “needed to have a chat”. This resulted in a day waiting for him to be assessed by which point, he was fine and had perked up. Meanwhile, I couldn’t find a parking spot at the hospital and was driving round and round the multi-storey carpark. Not finding anything, I was heading back down and hit a concrete divider on the exit ramp. Talk about things going from bad to worse. I’d cracked the radiator and my kid tells me that the engine’s on fire and smoke’s rising out of the bonnet. By this point, I was totally paralyzed, numb and couldn’t even consider where the hazard lights or the button for the bonnet were located. Fortunately, child stepped in and went for help. Don’t laugh but the tow truck was already there! Problem solved. Car parked.

I felt absolutely shell-shocked after all of that and am still in recovery mode. We went to a friend’s place for a birthday Friday night and that was fantastic and yesterday I was on duty at the sailing club.Well, somewhat on duty. I ended up sitting upstairs in the restaurant venting my spleen in ink. I also managed to get some photos of Geoff on his sailing course. I really wished I could’ve been out there sailing as well but these small boats are too much for me physically and I need more of a champagne yachting experience. 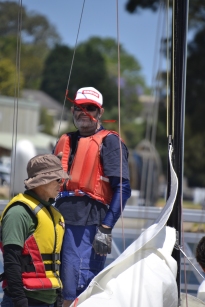 While I was at the hospital, I managed to finish a fantastic book by investigative journalist, Leigh Sales, called: Any Ordinary Day. It looks at how people respond to extreme trauma and also looks at the interaction between chance and destiny. It really got up close and personal to a series of truly shocking tragedies and unravelled at least some of the threads. I highly recommend it! 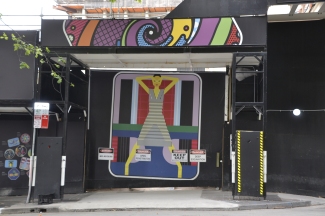 In terms of blogging last week, for Thursday Doors I walked up Bridge Street, Sydney up to the Sydney Conservatorium of Music, a route my mother followed for many years as a music student at the Con: Bridge Street Sydney- Thursday Doors.As I was walking up the hill, I particularly noticed the imposing clock tower peering over the Department of Lands building and thought of my mother and other students racing up the hill and being taunted by the clock: “You’re late! Late for an important date!” I also participated in Friday fictioneers with Barking Up the Wrong Tree

Well, I feel myself running out of steam now so I’ll head off. How was your week? I hope you have a good one.

This has been another Weekend Coffee Share, hosted by Eclectic Alli.