When you think about having a Merry Christmas, the last place you want to end up, aside from the local morgue is in hospital. That also applies to the weeks leading up to Christmas where it seems like the rest of the world is floating in bubbly and doing the Christmas party circuit, while you’re shuffling from appointment to appointment. That’s not all bad if it’s all routine, good news and you can wipe all that off your radar.

However, it doesn’t always work out that way. Six years ago, after my auto-immune disease flared up again and was resisting conventional treatment, I found out that they were bringing out the big guns and I was having chemo for Christmas. Yet, while this might seem like the worse Christmas present EVER, we actually viewed it as a blessing, a heaven-sent answer to prayer, and not a curse. They could do something. 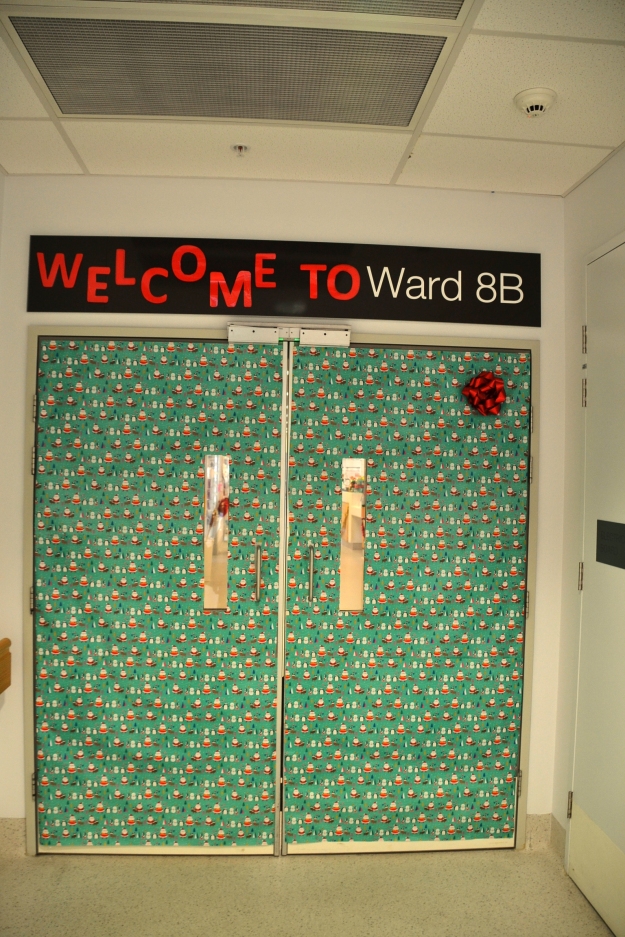 I wasn’t intending to revisit this journey today for Thursday Doors. Although I had lung function tests followed by an appointment with my lung specialist, I was intending to focus on my apres-appointment trip into the city (Sydney) where I photographed oodles of intriguing, eye-catching and even historic doors.

However, before I sorted them out, I wanted to acknowledge the efforts hospital staff have made to brighten up the place, trying to lift your spirits through what are often very traumatic, bleak and desperate times. News you don’t want at any time of year, but especially not at Christmas. Bad things aren’t allowed to happen over Christmas. That should be written into the fine print. Moreover, you wouldn’t be the first person to try to sue God either. Do you remember Billy Connolly in The Man Who Sued God?

Anyway, when I turned up for my lung function tests today, they’d decorated the doors for Christmas and clearly I had to take a photo for Thursday Doors.

I still remember when I walk out of those doors when I was first diagnosed with the fibrosis, and was absolutely distraught. My kids were only seven and five at the time and obviously needed their Mum. I felt bad if I was even five or ten minutes late to pick them up from school, and it was incomprehensible that I wouldn’t be there to pick them up at all. I left the lab with a single tissue and ended up in the hospital chapel sobbing my heart out, and there wasn’t a single tissue in the place. As hard as that tissue tried to cope with the deluge, it was overwrought. I ended up having to sneak back into the hospital toilets, get myself together and buy some tissues. I distinctly remember saying I had hay fever. What a duffer. A year or so later, when things deteriorated, I burst into tears in the hospital shop and the pink ladies rallied around me with such love. They were beautiful. 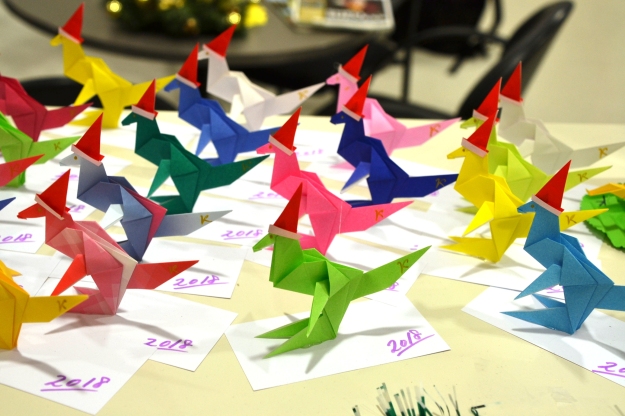 Anyway, as I mentioned, my specialists decided to treat the flare up using a chemotherapy drug called cyclophosphamide, which then introduced me to the Northern Cancer Centre on level 1 for my treatments. While I was there, I found out they had a resource centre and I came across a series of work booklets put out by the Cancer Council. These were really helpful for dealing with those really hard questions around death and dying, especially for families with kids. I was mentioning these booklets to a friend recently and that’s what brought me back to lvl 1 today. 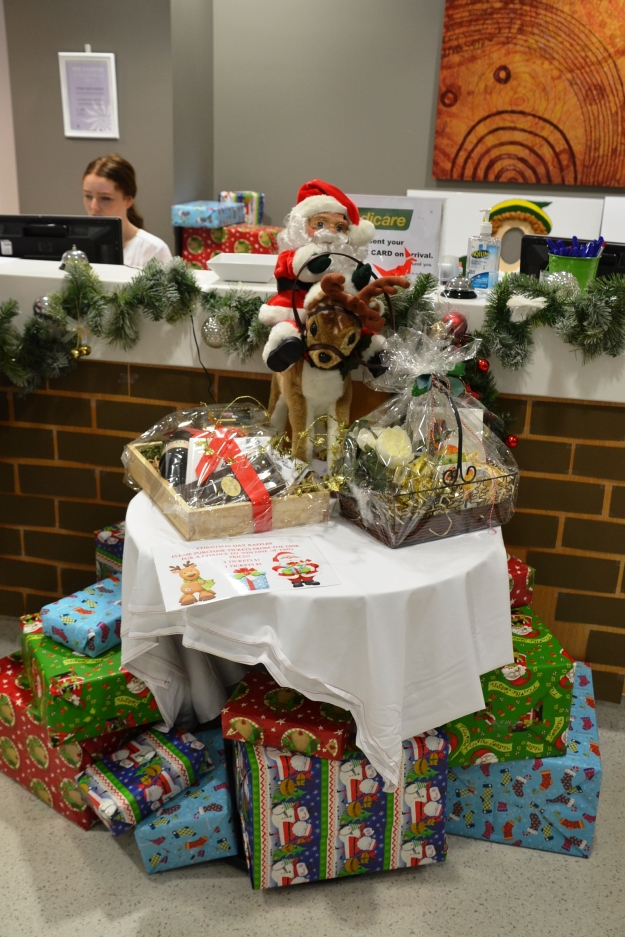 Having photographed the doors upstairs, I asked the staff if I could photograph their Christmas decorations. I felt like a bit of an idiot, but I wanted to back up the doors upstairs with a another example of how the hospital was getting into the Christmas spirit. Anyway, much to my delight, they upped the anti and asked me if I wanted to have my photo taken in their elf frame. Being an irrepressible extrovert, of course, I jumped at the chance. It was a lot of fun. 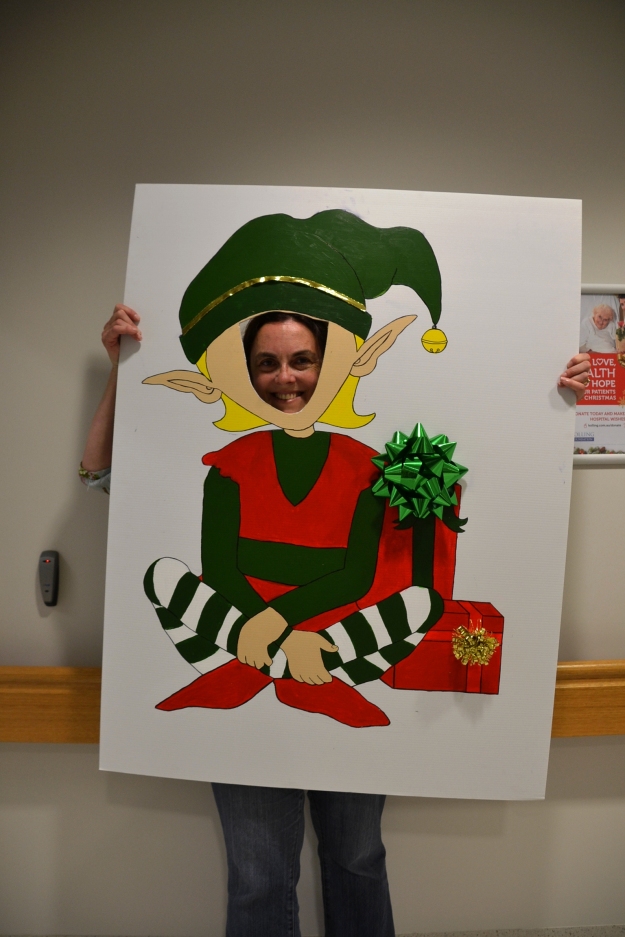 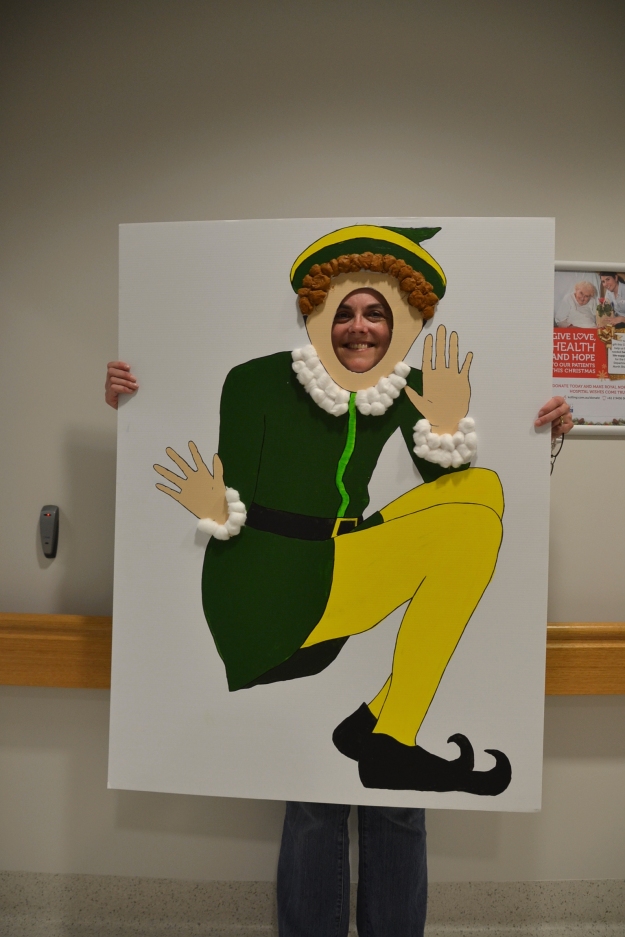 Before I head off and while we’re talking about the hospital’s Christmas celebrations, when I was there on Tuesday, a jazz band was playing the foyer and it’s something they’re doing during December. I couldn’t thank them enough. I’d actually just been to see a friend and it was an emotional time. So, it was really therapeutic to listen to the beautiful music and feel soothed. It was so thoughtful! 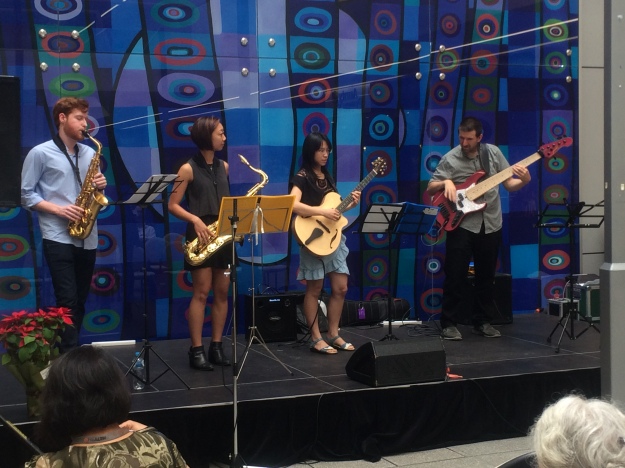 Well, I realize that talking death, dying and hospitals is a rather gloomy subject at this time of year, when I reflect that I’m still here six years later and in reasonable health, it actually becomes a celebration. A good news story which might touch somebody else’s troubled heart with a touch of hope. After all, as much as we might not want to be in hospital, the alternative is far worse and rather permanent.  So, I’d better close off this Thursday Doors with a huge shout out to all the doctors, nurses, physios, OT’s and support staff who help get us back on out feet and out the door.