This week, we’re heading off to St Mary’s Cathedral in Sydney. Somehow, St Mary’s has managed to remain a striking architectural and spiritual beacon, despite the urban jungle’s concerted efforts to smother and suffocate architectural relics beneath  with its towering canopy.

My grandparents on the steps of St Mary’s on their wedding day.

With my usual propensity for ending up in seemingly random places, I ended up at St Mary’s on Tuesday afternoon when it became the central point for me to meet up with my Mum and her brother and sister. Mum’s sister was visiting from Fremantle in Western Australia and for a brief moment in time there, all our roads led to St Mary’s Cathedral.

This was strangely more in keeping with my Dad’s family who is Catholic and his parents actually got married there in 1940 during WWII and the first Curtin to arrive in Australia from Cork, County Cork got married in the original St Mary’s Cathedral in 1855. My Great Grandfather’s funeral was also held at St Mary’s in 1936.

However, we are Christian and as far as we’re concerned, those old boundaries don’t matter anymore. We have one faith and being inside St Mary’s Cathedral with it’s incredible stained glass windows and reverence to God, was incredibly spiritual. Of course, you don’t need all of that to hear and talk to God, but it can be like putting on a beautiful dress. It doesn’t change who you are, but it lifts you up.

Our visit to St Mary’s was more of a time of reflective prayer and gratitude, than being there to do the touristy or photographic thing and admire all the architectural details. I did that a few years ago and am currently cursing my photo filing system, because I can’t find the photos anywhere and I wanted to share them with you.

However, what I did find, was the aerial perspective above which was taken from Centrepoint Tower.If you look carefully out the front of St Mary’s you’ll see a funeral cortege and I was reminded that the State funeral for Australia’s most successful and iconic horse trainer, Bart Cummings, was in progress at the time. Our daughter was auditioning for a role as one of the young Von Trapp children in Andrew Lloyd Webber’s production of The Sound of Music in Sydney that day, and I took her up Centrepoint Tower afterwards as a treat. For better or worse, she didn’t make it into the next round but even getting to the audition stage was an experience of a lifetime.

By the way, before we move inside the Cathedral and I do understand that I’m supposed to be showing off a few doors, and not just giving you the grand tour of everything but. However, I’d also like to point out that Sydney’s famous Hyde Park is in the foreground of that photo, and you can also see the striking Archibald Fountain by French sculptor Francois Sicard, which commemorates the association between Australia and France in World War I.

We all arrived in the city a bit early. So, I ended up meeting Mum and my aunt at the Archibald Fountain. We are all renowned for running late, and just when we thought we might be able to sneak in a quick coffee and raspberry tart at a French Cafe at St James Church in Macquarie Street, my uncle was also early and those ambitions were put on hold.

As the Cathedral’s web site explains:

“Today St Mary’s Cathedral is one of Australia’s most beautiful and significant buildings but it did not happen overnight. The Cathedral evolved through a long and patient timeline following a fire which destroyed the first St Mary’s Cathedral in 1865. As Australia’s largest Cathedral building, this English-style Gothic revival building constructed of honey-coloured Sydney sandstone, is regarded as the Mother Church for Australian Catholics. Its central Sydney location ensures a strong and visual presence of the church in Australia’s largest city. Architect William Wardell was commissioned by Archbishop John Polding to design a new St Mary’s following the devastating fire in 1865 razed the original Cathedral. According to Archbishop Polding to Wardell in a letter dated 10 October, 1865: “Any plan, any style, anything that is beautiful and grand. I leave all to you and your own inspiration”. Despite the building’s European origins, Wardell used Australian native flora throughout as a decorative element to ground the Cathedral in its local setting. It took close to 100 years to finally complete St Marys with the first stage constructed between 1866 and 1900 and stage two between 1912 and 1928. However, the original Wardell design was only finally completed in June 2000 when the metal frames of the imposing Southern Spires were lowered into place by helicopter and then sheathed in Gosford sandstone. According to the former Archbishop of Sydney George Pell: “This beautiful Cathedral Church is many things: a historic building, an architectural wonder, a monument to the role which Christianity and especially the Catholic faith has played in Australian life from the first days of European settlement and a magnificent tribute to the faith and commitment of generations of Catholics.” Dedicated to the Blessed Virgin Mary, under the title of Immaculate Mother of God, Help of Christians, the Cathedral will celebrate its Sesquicentenary in 2018, 150 years since the laying of the foundation stone of the new Cathedral by Archbishop Polding.” 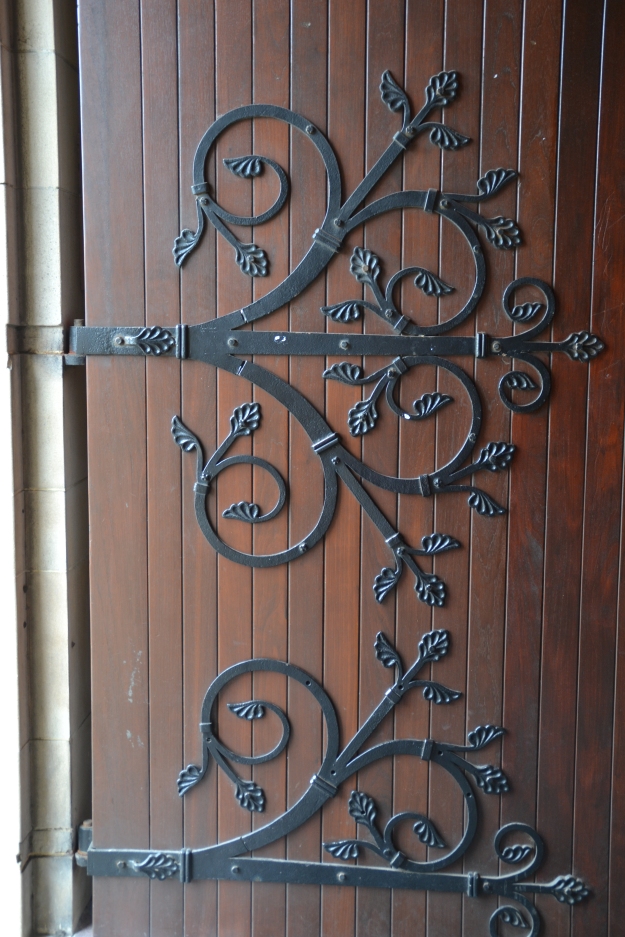 While we were visiting St Mary’s on Tuesday, I spotted the ancient-looking doors to the cathedral and thought they’d make a very respectable contribution to Thursday Doors. Moreover, with only five sleeps til Christmas, it’s quite apt to visit a Church this week and in addition to the Cathedral’s doors, I also wanted to share the nativity scenes and other Christmas decorations. 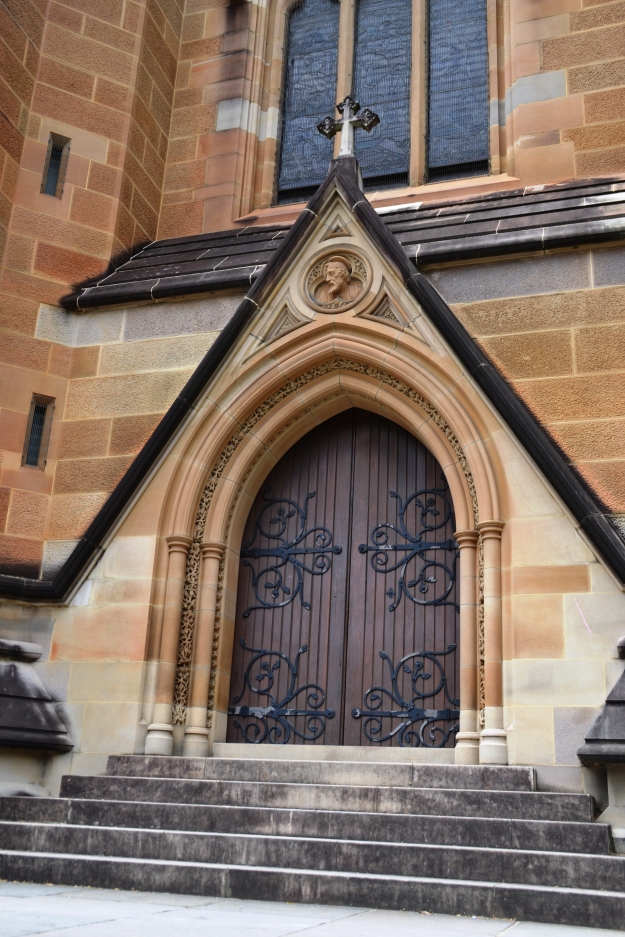 I also spotted these doors for confession: 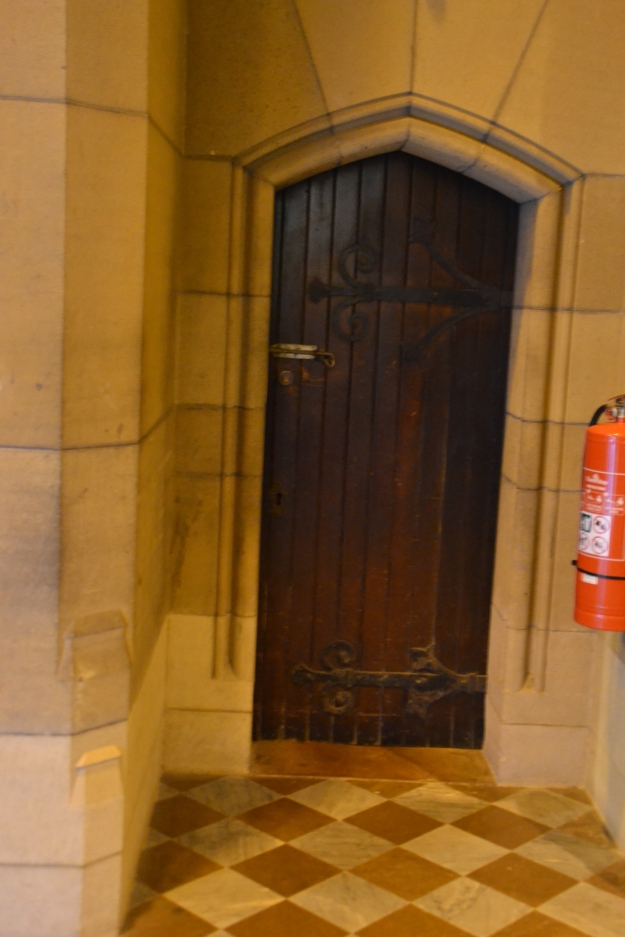 I couldn’t help wondering what was being concealed behind this door. It looked rather mysterious.

Before we leave St Mary’s, I would like to share both the indoor and outdoor nativity scenes out of interest, but also to give our visit a touch of the Christmas spirit. 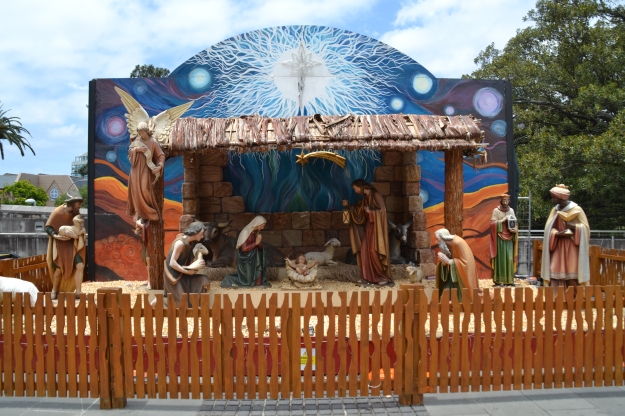 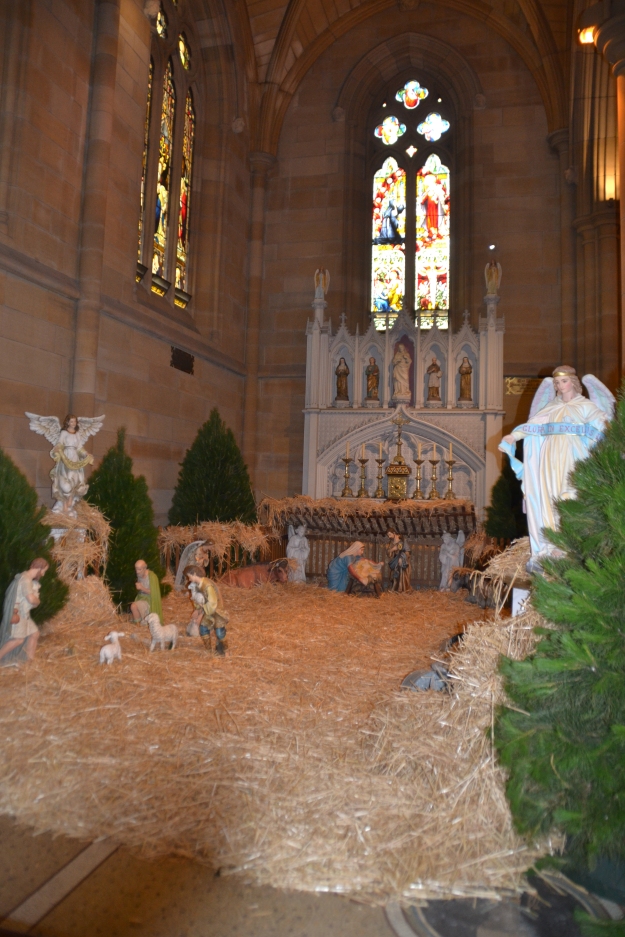 Lastly, when it comes to Churches, I also think it’s important to talk about them having their doors open and welcoming people in, as well as them being closed for whatever reason. When I was a child, the doors to Catholic Churches were always open. However, that is no longer the case. The doors to St Mary’s Cathedral are open from 6.30am to 6.30pm and longer around Christmas.

For those of you interested in the musical side of things at St Mary’s, here’s a few links:

Well, I hope you’ve enjoyed our visit to St Mary’s Cathedral. This has been another contribution to Thursday Doors hosted by Norm 2.0. Why don’t you come and join us and share a few of your favourite doors. It’s a lot of fun and helps you see parts of the world you’ll never get to visit.

Before I head off, I’d like to wish you and yours a Merry and Blessed Christmas and a wonder-filled and happy New Year.