As I walked through the familiar doors of Gosford Sailing Club for the Australia Day Regatta on Saturday, I pulled out my camera and thought: “You’ll do. That’s Thursday Doors done and dusted.”

When you visit Gosford Sailing Club, you’ll find the front door is located at 28 Mason Parade, Gosford and the back door and marina, is parked on Brisbane Waters, a vast expanse of stunning blue water ideal for sailing, water sports and the oyster industry.

Gosford Sailing Club started out in 1932 as the Gosford Rowing, Sailing and Motor Club.

By the end of the 1932/33 season the club was referred to as the Gosford and Brisbane Water Aquatic Club and in 1941 it changed its name to the Gosford Sailing Club. It was not the first sailing club to be formed on the Brisbane Water but it is the only club that has survived. If you’re interested in maps and sailing, you can click through HERE/ to a map of Brisbane Waters put out by Marine Rescue.

Rather than focusing on doors this week, I thought you’d all appreciate experiencing the Australia Day Sail Past, which took place before the Regatta. 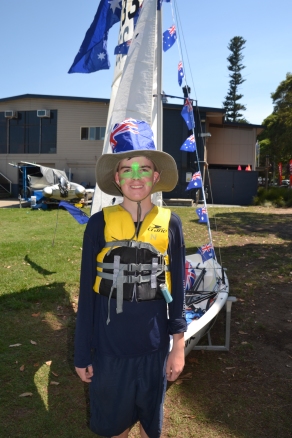 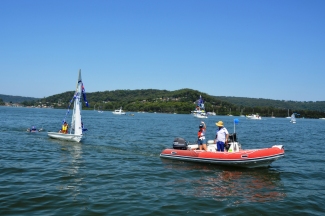 Our son took part in his Flying 11 and when we last caught sight of him, he was on the boat. However, as they say: “never turn your back on the ocean” and our son and many a teenager has much in common with the sea. The next time we see him, his boat is being towed past by the rescue boat with his crew member steering and he’s out the back being towed along on an inflatable donut printed with the Australian Flag. Just to add to the overall look, he was wearing the Australian Flag top hat my husband had bought him.

However, what I noticed most about him was his smile. He was absolutely beaming. Happy as Larry. That’s something any parent of a teenager is also thrilled to see. After all, life with teenagers can be a bit like life at the top of Enid Blyton’s Magic Faraway Tree. You can never be sure who you’re going to run into.

By the way, our son received the Junior Aussie Larrikin Award at the Awards Presentation later in the day. Parenting a larrikin can be a mixed blessing and it’s not the sort of thing that attracts awards. They’re usually awarded to the kid who can sit still the longest, not the one who climbs the walls. An adult larrikin award was also presented. That character was throwing water from a water bottle at the crowd going past and managed to get both the Commodore and General Manager of the club.

A Fire in the Sky… taken from Gosford Sailing Club November 2018.

Quite aside from sailing, Gosford Sailing Club is a fantastic vantage point for photographing magnificent sunsets. Although I have bucket loads of sunset photos stored up on my hard drive, I can’t resist and stand their soaking up all those magnificent golden rays through my lens feeling like I’m in heaven.

However, last Saturday afternoon, the sea mist rolled in instead for quite a different and beautifully mysterious experience. Nature is so incredibly beautiful and so ephemeral. Never the same.

Well, I hope you’ve enjoyed our visit to Gosford Sailing Club. This has been another contribution to Thursday Doors hosted by Norm 2.0. Why don’t you come and join us and share a few of your favourite doors. It’s a lot of fun and helps you see parts of the world you’ll never get to visit.