Thank goodness, this isn’t a eulogy and has become more of an appreciation of our beautiful Notre Dame Cathedral. Indeed, these words are the outpourings of a heart which almost broke yesterday, as the blazing orange flames all but consumed her like a savage beast.  Yet, we’re not grieving her death, but are now grateful that she miraculously survived.

Like so many of us who have survived horrendous infernos of this magnitude, Notre Dame is still standing, yet all but destroyed.  I am a survivor myself and know that seemingly bottomless grief. Indeed, I have asked these very same questions myself…How did this happen? What has been lost? What is left? What can be done? I have also known that very same, fierce determination to get back on my feet and overcome like so many survivors. We will rebuild. Yet, it still hurts and the pain feels like it has no end. However, somehow you suddenly reach the other end of the rainbow and your ordeal seems like a bad dream, although the scars remain.

Personally, Notre Dame has never just been somewhere I went in Paris. Indeed, our connection has always been personal and it wasn’t just about the building either. No doubt, it’s the same for millions around the world and throughout history and we each have our own story to tell. Indeed, in a strange way and no doubt encouraged by Victor Hugo’s The Hunchback of Notre Dame, she’s almost come to life.  We can almost feel her pulse, her heartbeat and believe she knows and understands us in ways beyond human understanding. Indeed, as I watched those infernal flames blaze with such fury, I could hear her gasping for breath unable to discern whether she wanted to live or to die.

Of course, by now I was also walking through the streets of Paris crying and singing the words of the Hail Mary in solidarity with the people, although I didn’t know the words in French or in English. I didn’t need to. Notre Dame was in my heart. As Notre Dame burned, Paris might have been one of the largest cities in the world, but she was a village once again.

However, who was I kidding? I wasn’t out on the streets with the people of Paris. Rather, I was still stuck here on the other side of the world and couldn’t be there. Of course, it wasn’t quite the same sense of anguish you feel when a loved one is dying and you can’t get back. When you desperately want to hold their hand and say your “I love yous” and goodbyes and miss out. Yet, I still felt the need to vent. Respond. Do something. 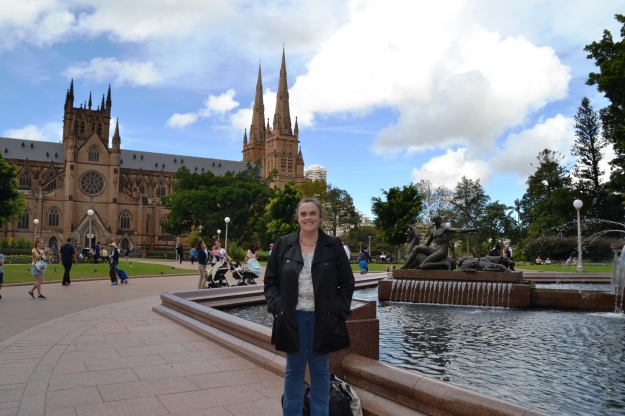 Yesterday, on the way to the Art Gallery of NSW with my daughter, we detoured via Sydney’s St Mary’s Cathedral to pay our respects to the smouldering remains of Notre Dame and her extended global community. Indeed, I needed to pray and being there was the closest I could get to being near Notre Dame.

Our daughter sitting on the steps of St Mary’s Cathedral on Tuesday. Not quite the same effect as Princess Diana at the Taj Mahal but there’s promise.

Back when my husband first told me the news, I jumped straight out of bed and switched on the TV expecting some kind of mistake. Yet, there she was right before my very eyes…a blazing, orange inferno. Brutal, cruel and almost evil, she was trapped in the flames with no way out. Yet, the valiant fire fighters of Paris, just like those of New York on 9/11, were there fighting to put out the flames and save her from eternal destruction.

Notre Dame! The name says it all, even for me as an Australian. 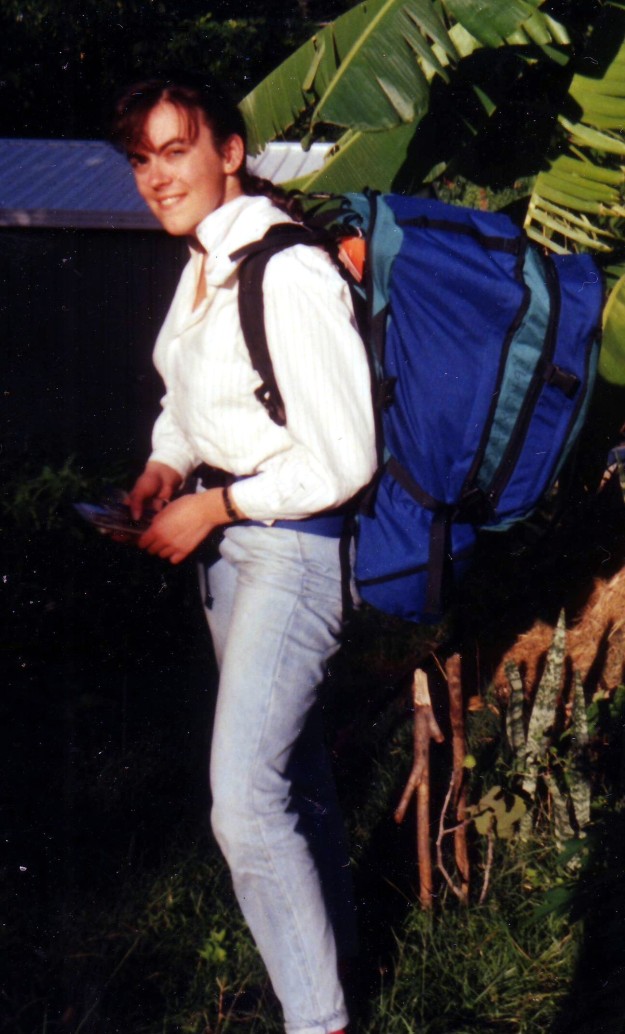 My backpack and I just before I left.

On the 13th July, 1992 I arrived at Paris’s Gare du Nord with my backpack and I found my way to the Hotel Henri IV in Rue Saint Jacques only five minutes’ walk from Notre Dame. I stayed there with friends for a few weeks, exploring the city of light and romantic turmoil, while Notre Dame stood seemingly unmoved and her bells chimed.

Being immersed in all that history and architectural grandeur, was an incredible experience for a young Australian experiencing Europe for the first time. We had nothing like it. Unfortunately, the City of Love also turned out to be the City of Heartbreak and despair. Indeed, I’m sure it’s no coincidence that so many philosophers, writers and artists have gathered there. I definitely sensed a dark undercurrent to Paris, and perhaps in this context, Notre Dame needed to be the light.

My parents met up with me in Paris and we not only went to Notre Dame, my father and I also had our portraits sketched out the front. While I don’t particularly remember the interior, I still remember going inside and experiencing the most incredible sense of peace…the peace which surpasses human understanding. I also remember feeling it was much cooler inside with a distinct temperature drop. Being July, it was boiling hot outside and perhaps it was a few degrees cooler inside the cathedral. I don’t know. However, this combined with the stained glass windows and subdued lighting did create an ambiance.

Yet, quite aside from that, I could really sense the comforting presence of God. Only a few weeks’ beforehand, my mother’s aunt had passed away. She and Mum were particularly close and brought closer still by Mum’s strict upbringing. So, although we’re not Catholic, we lit a candle for her. Lighting that wick, has always been special. However, it’s felt even sacred since the fire. It was such an incredibly poignant moment. I think we also lit a candle for Mum’s younger sister, Lyn, who’d suddenly been ripped away from us at 36 with double pneumonia. Lyn’s death was one of those wounds which never seemed to heal. Lyn was beautiful, vivacious and so young. Naturally, her death rocked everyone who knew her. It didn’t make sense and we just had to get used to living with our grief.

No doubt, over the last 856 years, millions have also had such moments where they’ve been  touched by God’s love and this indescribable peace at Notre Dame. Of course, I know this experience isn’t unique to us, although it certainly felt that way. People have prayed for the living, cried for the dead and wrestled with everything in between and Notre Dame has stood as solid as a rock through the French Revolution, two world wars, and hoards of visitors. Indeed, even that blazing infernal couldn’t destroy her completely, but it’s been too close a call.

Yet, she has also suffered terrible neglect, which has taken its toll. As Victor Hugo wrote in The Hunchback of Notre Dame:

“(I)t is difficult not to sigh, not to wax indignant, before the numberless degradations and mutilations which time and men have both caused the venerable monument to suffer.”

So why was it so difficult to raise the money to restore and maintain this stunning, historic and sacred cathedral, which has always been at the very heart of Paris? It is hard to understand.

However, as we move forward as a global community, we now have the chance to show her the love we’ve always felt, but haven’t sufficiently expressed. She has given us so much, and now it’s our turn to give back in whatever way we can. For some of us, that will be in words or paint while others have been financially blessed.

Notre Dame needs to be that phoenix rising out of the ashes. We need to see that you can rise up from near total destruction, and start over not only as a building but also as individuals and communities. We can get better. Moreover, we also need to restore Notre Dame for future generations who will also be reaching out for God’s love and the peace which surpasses human understanding in an imperfect and often turbulent world.

Have you been to Notre Dame and would like to share your thoughts? Please leave them in the comments.