“You need not be sorry for her. She was one of the kind that likes to

grow up. In the end she grew up of her own free will a day quicker than

/Tonight, we waved Miss off on her school ski trip. They were picked up from school in three massive coaches tonight and they’ll drive through the night to hit the slopes at Perisher Smiggins in the Australian Alps bright and early at 7.00am. By the way, if you’re used to skiing overseas, I’ll let you in on a little secret. The so-called “Australian Alps”, should really be called  “The Australian Mole Hills”. We don’t have real mountains in Australia.

Naturally, seeing her off was a tad emotional and yanked away at my heart strings, Although she’s now 13 and in high school, as she climbed on board,  it was like watching this tiny girl get swallowed up by this massive white coach and disappear.  Not that I was about to board the bus to yank her to safety. I’m not that pathetic. I know it’s only for a few days and she’s been away from us for longer trips before. However, it’s moments like these where you not only think about all the fun adventures she’ll have, but the gaps in between certainties also open up just enough to let in the doubt. The what ifs. After all, we live in an uncertain world where anything could change at the tick of the clock. Of course, these uncertainties are always there, but our routines and busyness block them out and we forget we don’t hold the remote control. That things can happen. On the other hand, I’m equally sure she’ll arrive home tired with a beaming smile on Friday. She’ll have been away on what will be yet another trip of a lifetime.

“I think she is growing up, and so begins to dream dreams, and have

hopes and fears and fidgets, without knowing why or being able to

Another thought crossed my mind as I started working on this post, we’re in the process of waving goodbye to her childhood. Indeed, it’s clear that horse has already bolted. That said, she hasn’t grown up quite as much as the photo would suggest. She must be standing on a mound because there’s no way she’s as tall as me. I’m a good 174 cm  tall and she’s nowhere near it. Just as well I took this photo below with her Dad, which brings her nicely back down to size. Geoff is the same height as me so she hasn’t shot up quite as much after all. 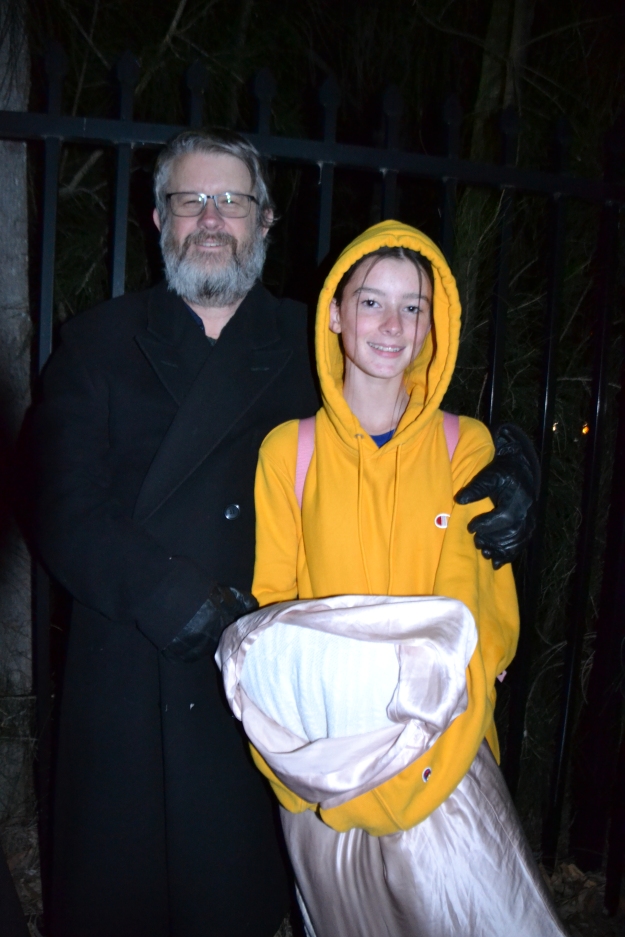 Yet, she’s still grown up a lot since I first started blogging back in 2012. She’d only just started school the year before and truly was a little girl back then.

“All changes, even the most longed for, have their melancholy; for what

we leave behind us is a part of ourselves; we must die to one life before

we can enter another.”-

The kids on my daughter’s first day of school back in 2011.

There are people I’ve been blogging with much of those years and have seen my kids grow up, which is a really special privilege really. After all, it’s an incredible thing to see someone grow up, looking at their photos, taking in their adventures and stories and being a part of their lives even if you’ve never met, which is one of the peculiarities of these close blogging friendships. In some instances, we do know each other better than people in the so-called real world, but we’ve never met. Never gone out for a real coffee. Nothing. It no longer seems strange to me until I try to explain it to someone who doesn’t blog.

Anyway, getting back to the trip, it’s going to be an experience for her. It was optional trip, and so many of her friends aren’t going, which has thrown her somewhat out of her comfort zone and she’ll be mixing with other students she doesn’t know and others where there are some tensions to boot. In effect, she’s stuck in a lift with these people for the week. While as  a teacher or parent, we can see this as a good thing and say a stranger is only a friend you haven’t met, as a teenager, is a whole different story. It can be unsettling. 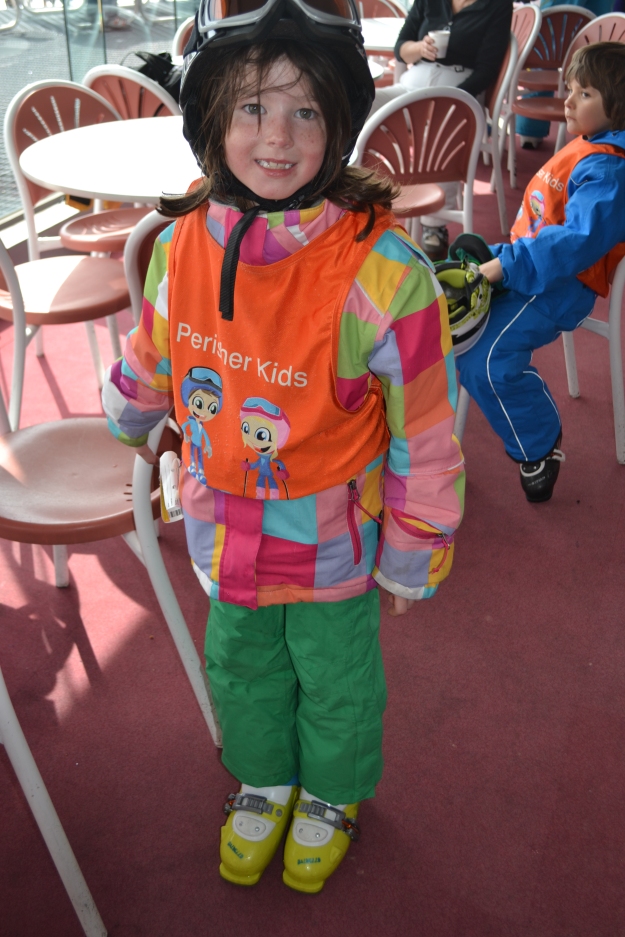 However, Miss really loves skiing and is is a fairly good skier, especially compared to most of these kids who won’t have been skiing before. That should give her a bit of confidence.  I’ve also seen her face light up on the slopes. She’s had the ski bug bad before and once she hits the powder, she’ll be right. I just hope she doesn’t sustain an injury, because that could be a disaster for her dancing. She’s performing in Swan Lake with Central Dance Company in four weeks. She’s not allowed to get injured and in hindsight, perhaps I should’ve put a roll of bubble wrap into her suitcase. That would be a great look out on the slopes, but I’m sure I could’ve sold a few bubble wrap suits to some of the other parents. While we say we want our kids to get out there and experience the world, we’re all lying. We really just want them to sit in front of the TV and stay safe. 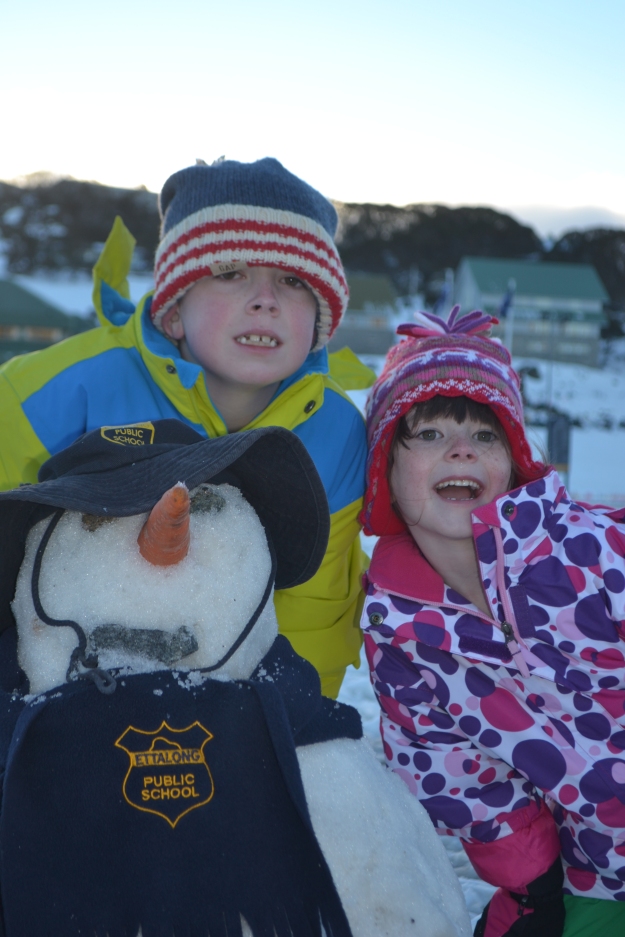 Meanwhile, we have one less person at home. For her brother, it means more chores but for me there’s one less fuss pot to feed and we could all use a few new stories. I’ve been fighting off some weird sleep virus so haven’t been much fun anyway. The week will fly by and all too soon, she’ll be back.

Well, that is except for the dogs. They don’t know anything about fun-filled ski adventures or the frolics of the sun. All they saw was the suitcase come out, and Miss is gone. Indeed, I could just imagine Lady thinking we’re hopeless parents. Don’t they even realize they’ve lost one? This is her song…

Meanwhile, I’ve spent a few hours tonight hunting down the photos from 2012 and getting well and truly lost down memory lane. Our son only has two more years of school and who knows how many family holidays we have left. That’s not to be negative and reflective. However, it is important to make the most of it. Find the time and money to get away. I’ve been thinking about a camping trip soon. That said, my husband and son will be going camping with the extended family up at Bathurst in a few weeks time to watch the Bathurst 500 Car Race. My daughter and I are staying home “to look after the dogs”, but she also has a dance production.

Anyway, I’m very late to get to bed and will head on now.

I’d love to hear about your skiing adventures or how you feel about your kids growing up and stretching their wings.