“I tried to discover, in the rumor of forests and waves, words that other men could not hear, and I pricked up my ears to listen to the revelation of their harmony.”
― Gustave Flaubert, November

With the start of the new school year a few weeks ago, I’ve been trying to get back into the habit of going for a walk after I drop the kids at school in the morning. Despite being a night owl, I am finding that when I get something done first thing, it actually happens. It doesn’t just drift off into the never never once the day gets underway and distraction reigns.
Unfortunately, habit and routine aren’t my strengths, but I’ve made peace with that. Decided that walking sometimes is good too, and that any walk is better than nothing. Perhaps, this is being too kind and I ought to show myself more tough love. Pull my socks up. Be mean and nasty. “Hey you good for nothing lazy slob of a slacker, get moving”. Or, words to that effect. I could also try reminding myself of just how beautiful the beach is, and how I could be pacing round a concrete jungle instead. “Get a grip, Snowflake!” 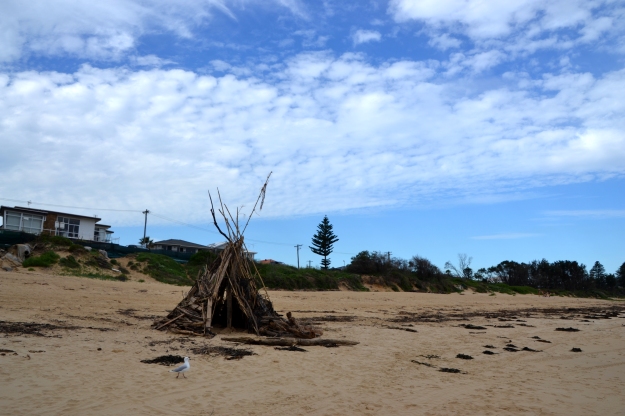 A sea gull looking for a new home perhaps…

Anyway, this morning I made it back down to the beach and was in for quite a surprise. I spotted a series of wooden teepees dotted along the length of the beach. Some very well-constructed deluxe versions which you could almost call home, and others which were more along the lines of stick sculptures. These had no structural integrity at all, and it wouldn’t even take the Big Bad Wolf to huff and puff and blow the place down. Indeed, it might only take a seagull perched in the wrong spot. 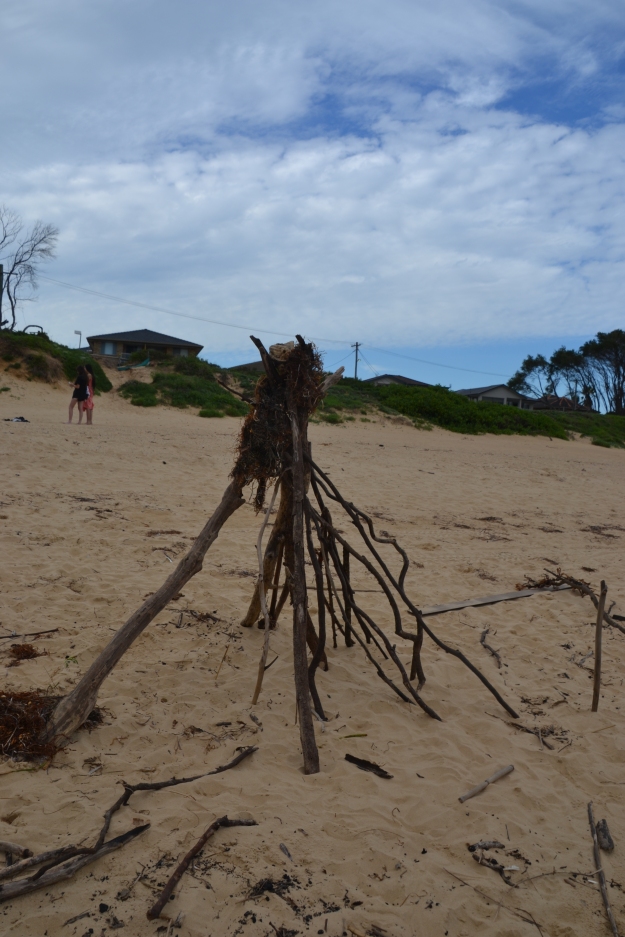 More of a stick sculpture than a dwelling place.

I’ve never seen a teepee of any sort on any beach before. These were rather primitive structures,  been made out of stuff on the beach.  I was rather impressed with the construction techniques of the more luxurious dwellings and actually found a Dad building one with with his two daughters this afternoon. They didn’t know who’d built the other teepees, and how the building frenzy came about, but I’ll eventually find out. We live on a peninsula and there are NO secrets.

I didn’t have my camera with me this morning, and drove back home to pick it up. I had planned to head straight back before the sun intensified. However, a cup of tea later and inertia had set in and it took a cattle prod to get me back again this afternoon. Indeed, I could hear a wee small voice telling me to wait til tomorrow morning when the light would be better. However, I knew the transience of the beach. There’s usually nothing left in the morning.

“All of these lines across my face, tell you the story of who I am. So many stories of where I’ve been and how I got to where I am.” 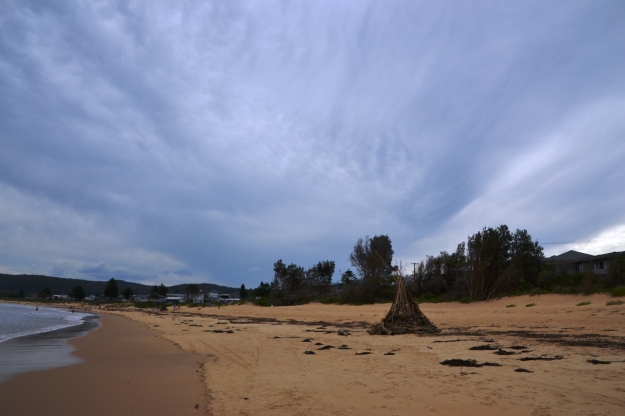 Yet, as you walk along the beach with your eyes wide open taking in all the infinitesimal details, you can appreciate a sense of history. That just like the human face tells a story with its array of freckles, lines, wrinkles scars and baby-soft skin, the detritus on the beach also tells a tale. As far as our beach was concerned today, the sand was almost buried in detritus from the recent bush fires, storms and floods. Massive ribbons of seaweed had been uprooted from the sea, and there were also huge branches and multitudinous sticks (which surely must be heaven for the local dogs). Many of the sticks and branches were charcoaled,  a legacy of the recent bush fires, and there were also traces of charcoal in the strand lines along the beach.However, in layperson’s terms, the beach was a mess and I could see the council sending down the tractor. This was no job for a rake or broom.

However, another storm hit tonight and I doubt the teepees will still be there in the morning. Indeed, I’m sure the hungry, greedy sea has devoured the lot and when I go back tomorrow, they’ll be gone and the remains of tonight’s meal will be left behind instead. Golly! I don’t know if you’ve noticed, but he doesn’t even clean his plate!

“As we feel the whispering vibrations of the sea and hover on the waves of the present, we realize that each moment flows into an unknown destination. Everything melts down into a new mystery since ‘now’ will never come back, and ‘tomorrow’ is uncharted territory. (“Voices of the sea”)”
― Erik Pevernagie 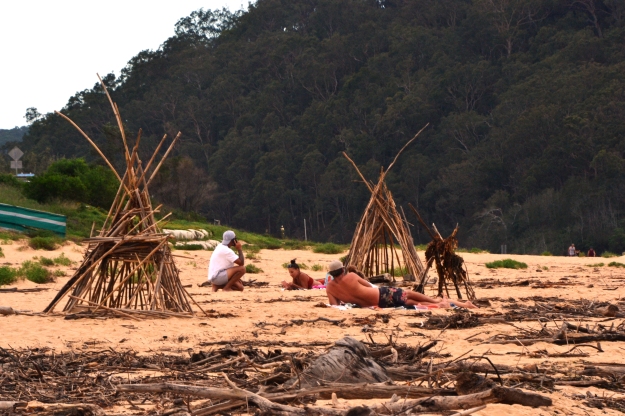 “No permanence is ours; we are a wave
That flows to fit whatever form it finds”
― Hermann Hesse, The Glass Bead Game

I guess the only saving grace is that the teepees  lasted longer than a sandcastle and after tonight’s storm, there will be plenty of materials to go and build some more.
Best wishes,
Rowena

4 thoughts on “Walking Along Teepee Beach…Australia.”