“The hardest thing about living in Canberra is that almost everyone who doesn’t live here asks: ‘Why on earth would you live in Canberra?’ Loudly, and in a way they would never use to discuss anywhere else. And they never listen to the answer.”

Welcome to Day 3 of the Blogging A to Z Challenge.

Today, we’re leaving Europe behind and leap frogging across the globe to Australia’s capital city, Canberra, which started out as a city in the sheep paddocks and has evolved into a dynamic cultural centre despite, or perhaps because of the politicians. Indeed,  “Canberra” is often used to refer to all things political going on down there, becoming an entity beyond place.

However, before Canberra became “Canberra”, the indigenous Ngunnawal and Ngambri people had been living in the area for thousands of years and the name ‘Canberra’ is said to be derived from an indigenous word meaning ‘meeting place’.

Canberra only rose to fame after Australia’s six states and two territories federated to form Australia. As there was intense rivalry between Sydney and Melbourne  to become the nation’s capital, it was my understanding that it was decided to locate the capital   half-way in between in Canberra. However, it turns out that at a premiers’ conference in Melbourne in January 1899, NSW Premier George Reid won support for the capital to be located within his state. However, as a trade-off, section 125 of the new federal Constitution specifically stated that the capital  could be no less than 100 miles (160 kilometres) from Sydney. In the meantime, Melbourne would act as the interim capital. The first Commonwealth Parliament met in Melbourne on 9 May 1901. However, Federal Parliament didn’t move to Canberrra until 1927.

However, when we’ve gone to Canberra, it’s had nothing to do with politics. Rather, we’ve always been driving back from the snow, and were more interested in its museums.

Being the nation’s capital, it’s home to the National Gallery (art), Questacon (Science), and the Australian War Memorial, which I’d place on an equal footing. However, I doubt the rest of the family would concur and no doubt our teenagers would want to see more than galleries these days.  I also wanted to mention that both our kids went on what’s known as “The Canberra Trip” when they were in primary school. It’s a right of passage (at least around here) and it’s a big excitement for them to head off in the coach with their friends, and an emotional time for their parents as the coach leaves.

Obviously, all three of these museums are currently closed due to the Coronavirus. However, perhaps this will inspire you to visit later. Alternately, these brief stop overs might satisfy your museum urge while you’re in social isolation and I’ve actually been able to provide links to online exhibitions. So, I’m pretty chuffed, and am not such a bad tour guide after all!

The daily Last Post Ceremony, which is held at the Pool of Reflection. Geoff and the kids presented a wreath in honour of Geoff’s Great Uncle, Pte Robert Ralph French who was killed in action in France.

“Here is their spirit, in the heart of the land they loved; and here we

guard the record which they themselves made.”

For anyone with a passion for history, I strongly recommend visiting the Australian War Memorial in Canberra, especially if you have a family member who served in any of our armed conflicts, or even if you simply want to know how war has impacted our people on and off the battlefield. It’s absolutely riveting. Indeed, I believe we’ve been there three times as a family, and each time we’ve stayed much longer than intended and had to tear ourselves away. Moreover, now that my research into Australians serving on the Western Front during WWI has taken off, I could probably spend the rest of my life in this place and not blink an eye. Indeed, if I snuck down while the place is in lock down, nobody would even know I was there…!

Over the years, the Australian War Memorial has moved from being a physical, concrete entity and added an online counterpart, which is an invaluable resource. I am particularly grateful for this, as it’s not that easy for me to get down to Canberra and it’s so much easier to click on links online than combing through boxes of files. 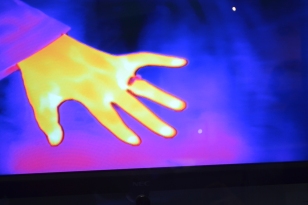 Questacon is like a huge playcentre for science and engineering nerds. Yet, I also managed to find my own niche as a photographer by capturing the freaky lighting effects on film. That was a lot of fun and really extended my powers of perception (see above).

Of course, that wasn’t why it was there. Besides, I love science anyway.  It’s just that some of it can get beyond my pay grade, or is in areas I’m not interested in and that’s okay. We don’t have to love everything.

By the way, I should also mention there’s a great shop at Questacon. If you’re getting a bit sick of wearing Pyjamas everyday, perhaps you’d like to splurge on a Questacon lab coat?

The National Art Gallery has made my job a lot easier, and is currently holding a couple of online exhibitions. So, I’d love you to join me for:

In case you’re unfamiliar with Hugh Ramsay’s work, here’s a brief intro posted by the gallery: “Hugh Ramsay (1877–1906) was an accomplished Australian artist whose portrait paintings achieved success here and in France before his untimely death at the age of 28. This retrospective, the first to focus on Ramsay in more than a quarter of a century, brings together paintings, drawings, sketchbooks and letters from collections around the country to celebrate his achievements.”

In terms of their regular exhibits, my favourite is Sidney Nolan’s Ned Kelly Series:

Well, that concludes our very brief gallery tour of Canberra, but I’ve left you with plenty of places to wonder off to online if you follow through to the links.

Have you ever been to Canberra? What were your favourites? Please leave your thoughts and any links in the comments.