Welcome back to Places I’ve Been, my theme for this year’s Blogging From A to Z April Challenge. Today, we’re off to Umina Beach, which isn’t very far away for me at all. It’s actually only 700 metres down the road.

Indeed, Umina Beach is home. Geoff and I moved up here almost 20 years ago to buy our first home. Despite what we thought would be a quick renovate and flip, we’re still here. In fact, we haven’t finished those renovations, and what we did manage to get done back at the beginning, needs to be re-done. After all, fixing up a fixer-upper is a lot like painting the Sydney Harbour Bridge. By the time you finally reach the finish, you need to  start painting at the beginning again. 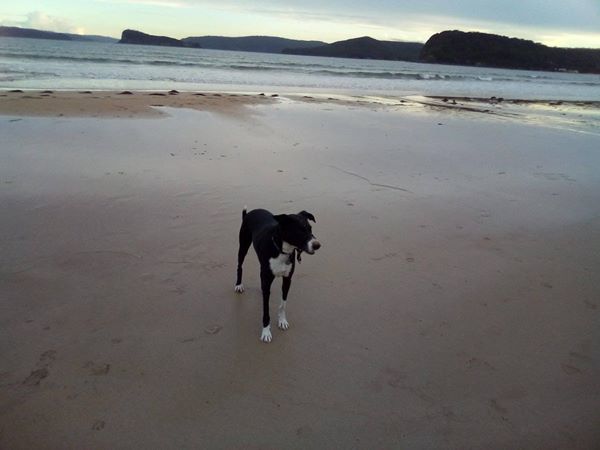 Zac at the beach a few weeks ago.

Geoff and I didn’t plan to leave Sydney, or even buy a place in Umina Beach. We’d started looking around real estate in Sydney, but came up to Umina Beach to visit our niece and this place was for sale two streets away. This massive decision was all very spontaneous, although you could also say it was meant to be. However, as we’ve found out, this decision was a lot more far-reaching than deciding where to camp for the night. Although Sydney’s only an hour down the road and Geoff commutes there for work, it’s not the same as actually living there.  It’s taken me quite a long time to call Umina Beach home, and I still consider myself a Sydney person. This region is considered part of Greater Sydney. However, when I was alone at home with the new baby and Geoff was commuting to Sydney and away most of the day, I really felt that distance. However, through getting involved in Church, playgroups and community action groups, that started to change. By the time the kids started school and I was also working part-time for a local IT company, I felt a lot more settled. Through living there, we’ve managed our mortgage on one income, without being enslaved to the mighty mortgage which is the norm in Sydney. It’s naturally a lot more relaxing around here with the beach at one end of the street and flat, inland water suitable for sailing and kayaking down another. Can’t complain about that!

So, after that rather lengthy introduction, you must be wondering if we’re ever going to make it to the beach. My apologies. I can take all of this a bit for granted what with living here all the time. However, before we hit the beach, I need to make a quick distinction between the name of the place and the names of the beaches around here. The place is called Umina Beach, but the beach itself is divided into Ocean Beach, which is just down from our place, and Umina Beach to the West. However, it’s all one expanse of golden sand and a fabulous place to go for a walk. There’s even a designated dog beach.

Our son racing at Nippers, a junior form of life saving.

In so many ways, the beach is our cultural hub and a true blue melting pot where lifesavers, swimmers, walkers, dogs, kids and seagulls all congregate, exercise and relax. We’ve taken the kids down to the beach from the time they were born, and held them into the frolicking waves, until they were old enough to hold their hands and eventually join Nippers, along with many of the other local kids on a Sunday morning. Now, our daughter goes down to the beach with her friends and Geoff and our son prefer sailing. I have done some swimming, but am better known as walker and dog walker, although there can also be a bit of talk with that as well.

The set of photos above were taken in November 2007 celebrating Geoff’s Birthday.

Our beach has had some rough times over the years. Rough storms have removed tonnes of sand, ripped out rows of native trees and extensive remediation works have been undertaken to halt the damage. The road around the beach front was even closed off for awhile there, as there were concerns it too could fall in the drink. I don’t think this situation has really stabilised but it might’ve improved. 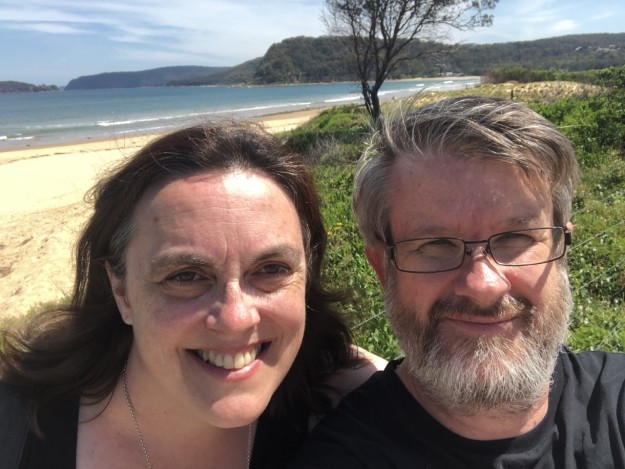 Just off Umina Beach, there’s the Umina Precinct Park, which as a dream come true for the local action group I belonged to when the kids were small. Back then, even getting a local park with a fence seemed like an impossible pipe dream. However, council came onboard and the project snowballed into a regional park and tourist attraction. This was well beyond our wildest dreams, and I should remember this when a situation seems hopeless. Never give up!

However,  every town has to have its personality. It’s claim to fame. For Umina Beach, this comes in the form of pastry chef, Ron Bruns from the Bremen Patisserie and his infamous pie… the Flamin Ron, the world’s hottest chilli pie. While I know Ron quite well and love his almond croissants and bee sting cake, I’ve never even considered dipping my little finger into one of these pies, let alone tried to eat one. In case you’re wondering whether this pie is as ruthlessly hot as it claims, you actually need to sign a legal waiver beforehand. So, that’s warning enough for me. However, despite local horror stories, there are still mighty warriors willing to take on the Flamin Ron challenge blow the consequences. This includes Richard, who tells a wonderful  tale

Woy Woy Air Strip extending down to Umina Beach with Lion Island right in front of the runway.

While I was putting together this post, I did some historical research, hoping to find some historical detail of interest. After all, if you’ve been following me throughout this series, you’ll know how much I love jumping into my time machine, travelling back in time beyond the present day. It’s somewhat well-known around here that there used to be an air strip through town. I couldn’t have told you exactly where it was. However, that’s what Google’s for and the old newspapers.

This brings us to the Woy Woy Airstrip, which was built during WWII along with an aerodrome. The runway extended from Woy Woy down in a straight line along what’s now Trafalgar Avenue into Umina Beach, ending about a street away from our place. During WWII, the air strip was even used by US bombers. You can read more about it here  at All Things Woy.

Imagine this crashing into your roof. Luckily, no one was home when a Tiger Moth crashed into a Umina home in 1950. This file is licensed under the Creative Commons Attribution-Share Alike 3.0 Unported license

However, our street wasn’t always a street away from trouble. On the 4th November, 1950 long a few life times before we moved in, a Tiger Moth plane crash landed into a house at the end of the street. Of course, 70 years down the track, having a Tiger Moth crash land in your street sounds particularly exciting (especially after being in lock down for at least 6 weeks!!), although I should also point out that the pilot was injured. The plane crashed into the roof, and as the pilot wandered out in a dazed state, he fell 15ft  off the roof. Fortunately, residents Mr and Mrs Henson were away visiting their daughter in Sydney at the time. The plane crashed right on dinner time, and it’s almost certain they would have been killed. So, there’s something more I learned on my travels during the Blogging From A to Z Challenge. 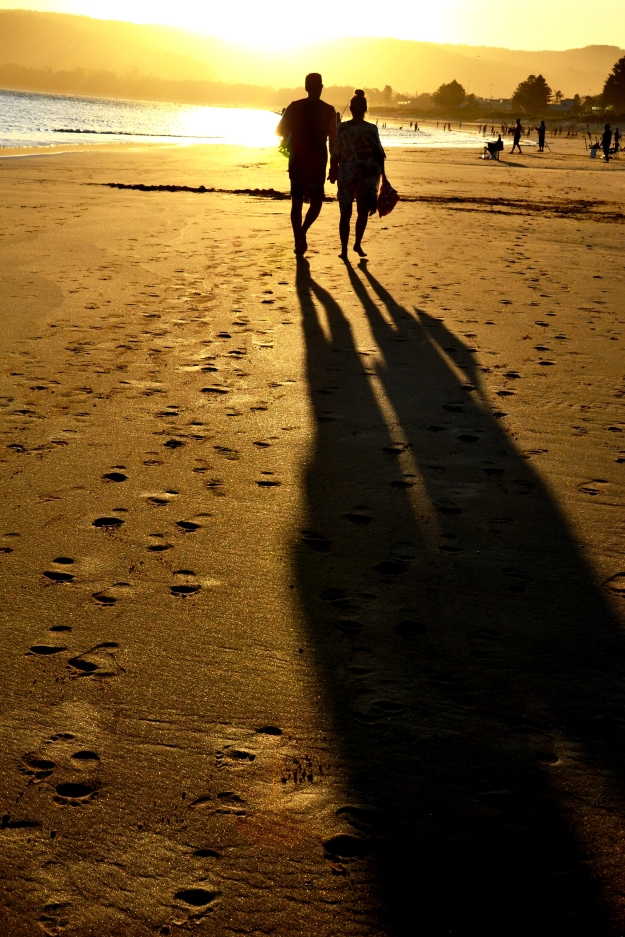 Sunset at the beach

Well, it’s now time to leave Umina Beach behind and get a bit of shut eye before our adventures start up again in the morning. Indeed, I might need to stay home for awhile after all this travel is over. What I would give to sleep in my own bed again, instead of tramping along the road from hotel to hotel.

Oh, that’s right. I haven’t been anywhere at all. It’s just me, myself and I stuck inside these same four walls along with Geoff, two teenagers and three dogs.

Humph! We’re definitely in need of a holiday!!

How are you holding up in isolation? Where would you like to go? My list is just getting longer and longer. However, due to my health, my movements are particularly restricted. So, right now even being able to walk into a local shop to buy some chocolate has become an impossible dream. That said, I’m certainly not going without. Hoarding chocolate hasn’t become a crime.