As an Australian, there’s seemingly no end to our deadly dangerous, venomous wildlife. I’ve written before about our encounters with venomous snakes, deadly Funnel Web Spiders Funnel Web Spiders and devilish   Drop Bears falling from trees. However, as dangerous as these might be, I’ve never actually been bitten.

The same can’t be said of the “Midge”.Last weekend, it got me. Indeed, I was all but consumed by the Midge and am still suffering terribly. While the Midge might be small, it packs a mighty punch!

“Is it just Aussie slang for a deadly beast you know by a more conventional name? Or, could those wild Australians possibly be harbouring yet another deadly fiend?”

Well, last weekend, I found out exactly what a Midge is.

Of course, knowing my luck, it had to be the hard, way when I was all but consumed by its relentless attack. 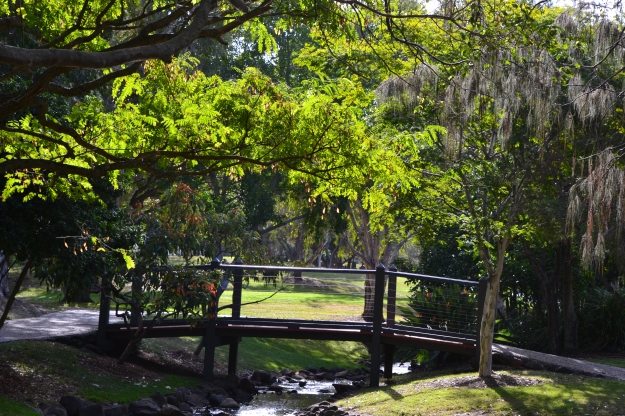 We were having a picnic in the park in Queensland’s Surfers Paradise. After running around chatting and photographing, there I was feasting on a slice of gooey Nutella Chocolate Birthday Cake crowned with luscious fresh raspberries when the sneaky blighters struck.

The first I heard of them, was when I started hearing our family and friends chatting about who has “sweet blood”. Thinking “Midgie” must have been Queensland slang for mosquitos, I relaxed. Mozzies tend to leave me alone. My blood must be so ridiculously sweet, that it’s undesirable. Moreover, I am not allergic to mozzie bites.

However, the Midge is NOT a mosquito. Rather, Biting Midges are very small flies (0.5mm – 4mm long), renowned for their nuisance biting and are associated with coastal habitats. They seemingly live in swarms and so it’s not the case of getting one bite but having bites all over every bit of exposed skin.

Although I was covered in red spots, I wasn’t phased until I heard someone say they get worse the next day. That’s when I began to take note. Start to wonder whether I was in trouble. After all, I’m allergic to bee stings and I’m on immouno-suppressant drugs and can end up on antibiotics for a simple grazed knee. Yet, I still wasn’t in a panic. How could such a  tiny fly cause an insatiable itch, sending you to the brink of madness?

I was about to find out.

Sunday morning, I took an antihistamine thinking trouble was on its way.

Sunday night, I caked my arms and legs in Calamine lotion. My feet felt like they were being eaten alive.

Midge Feet 3 days after the attack.

Monday, we bought an insect bite gel and coated myself in cortisone cream once we arrived home. 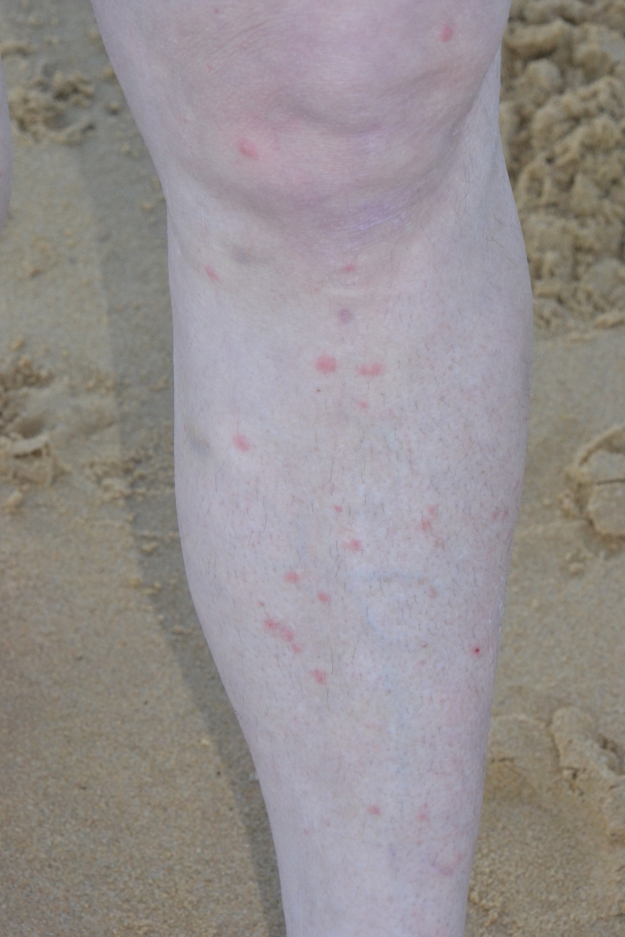 I had bites like this on both arms and legs. The itch could send you crazy…or, crazier!

While the Midge might be small, it packs a mighty punch! Three days later, I’m still itching like crazy and am about to head off to apply more creams, take more antihistamine and am hoping the bites don’t get infected and I’ll be onto antibiotics. Clearly, I am allergic to the Midge. 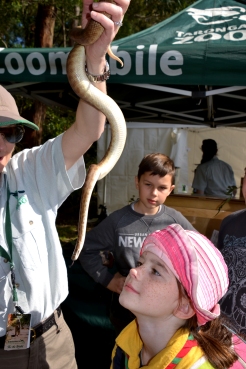 Miss intrigued by the Children’s Python.

So, while I used to give the Funnel Web spiders, snakes and sharks, their due, the humble Midge has now been added to my personal Australia’s Most Wanted List.

Or, should I say, the most UNwanted.

Now, where’s that cream? I can’t help wondering if it is cheaper by the dozen.