As I walked through the familiar doors of Gosford Sailing Club for the Australia Day Regatta on Saturday, I pulled out my camera and thought: “You’ll do. That’s Thursday Doors done and dusted.”

When you visit Gosford Sailing Club, you’ll find the front door is located at 28 Mason Parade, Gosford and the back door and marina, is parked on Brisbane Waters, a vast expanse of stunning blue water ideal for sailing, water sports and the oyster industry.

Gosford Sailing Club started out in 1932 as the Gosford Rowing, Sailing and Motor Club.

By the end of the 1932/33 season the club was referred to as the Gosford and Brisbane Water Aquatic Club and in 1941 it changed its name to the Gosford Sailing Club. It was not the first sailing club to be formed on the Brisbane Water but it is the only club that has survived. If you’re interested in maps and sailing, you can click through HERE/ to a map of Brisbane Waters put out by Marine Rescue. 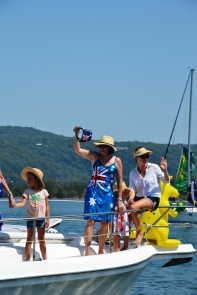 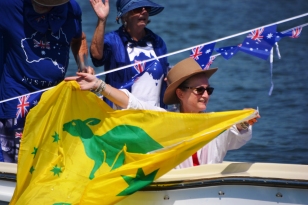 Rather than focusing on doors this week, I thought you’d all appreciate experiencing the Australia Day Sail Past, which took place before the Regatta.

Our son took part in his Flying 11 and when we last caught sight of him, he was on the boat. However, as they say: “never turn your back on the ocean” and our son and many a teenager has much in common with the sea. The next time we see him, his boat is being towed past by the rescue boat with his crew member steering and he’s out the back being towed along on an inflatable donut printed with the Australian Flag. Just to add to the overall look, he was wearing the Australian Flag top hat my husband had bought him.

However, what I noticed most about him was his smile. He was absolutely beaming. Happy as Larry. That’s something any parent of a teenager is also thrilled to see. After all, life with teenagers can be a bit like life at the top of Enid Blyton’s Magic Faraway Tree. You can never be sure who you’re going to run into.

By the way, our son received the Junior Aussie Larrikin Award at the Awards Presentation later in the day. Parenting a larrikin can be a mixed blessing and it’s not the sort of thing that attracts awards. They’re usually awarded to the kid who can sit still the longest, not the one who climbs the walls. An adult larrikin award was also presented. That character was throwing water from a water bottle at the crowd going past and managed to get both the Commodore and General Manager of the club. 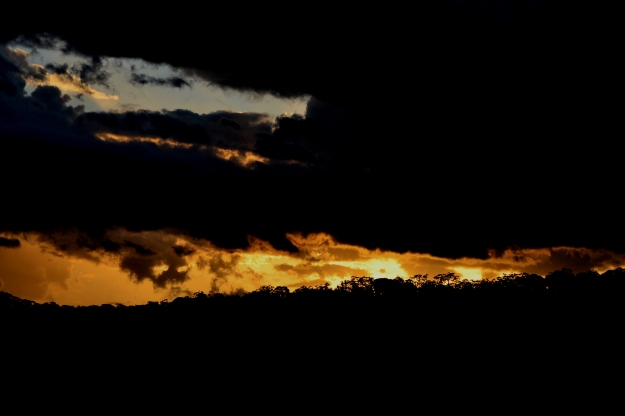 A Fire in the Sky… taken from Gosford Sailing Club November 2018.

Quite aside from sailing, Gosford Sailing Club is a fantastic vantage point for photographing magnificent sunsets. Although I have bucket loads of sunset photos stored up on my hard drive, I can’t resist and stand their soaking up all those magnificent golden rays through my lens feeling like I’m in heaven.

However, last Saturday afternoon, the sea mist rolled in instead for quite a different and beautifully mysterious experience. Nature is so incredibly beautiful and so ephemeral. Never the same.

Well, I hope you’ve enjoyed our visit to Gosford Sailing Club. This has been another contribution to Thursday Doors hosted by Norm 2.0. Why don’t you come and join us and share a few of your favourite doors. It’s a lot of fun and helps you see parts of the world you’ll never get to visit.

Buying bread from a man in Brussels
He was six-foot-four and full of muscles
I said, “do you speak-a my language?”
He just smiled and gave me a vegemite sandwich
And he said

I come from a land down under
Where beer does flow and men chunder
Can’t you hear, can’t you hear the thunder?
You better run, you better take cover, yeah

Men At Work: Down Under

Yesterday, our family headed off to Gosford Sailing Club  for the Australia Day Regatta.  The Australia Day Regatta is the oldest continuously-conducted annual sailing regatta in the world. It has been conducted each year since 1837. While based on Sydney Harbour, races are held around the coast and apparently our winner is off to receive their medal from the Sydney Lord Mayor.

Our son with his Flying 11 ready to set sail.

By the way, if you know anything about boats, our son was competing in his Flying 11, a small sail craft and Geoff was sailing in a Magic 25 (as in 25 ft) as part of his sailing course. Meanwhile, yours truly was armed with her Nikon D3100 and left on dry land.

“There is nothing, absolutely nothing half so much worth doing as simply messing around in boats.” 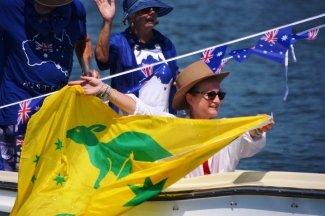 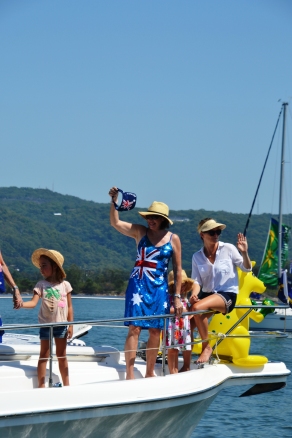 However, before the race got underway, our son was part of the Australia Day Sail Past. This was a real extroverted parade of sailors with most of the boats decked out in the most garish and ridiculous Australia Day gumph they could find. There was an inflatable boxing kangaroo and a plethora of flags and the one thing which was missing was our unofficial Australian National Anthem Down Under by Men at Work .

Above: We have my son’s boat being towed along by the support boat and his crew managinjg the boat while he (the skipper) is pulled along behind. Not the plan, but he clearly enjoyted himself, created a spectacle and won an award.

Our son had Australian Flag bunting on the stays, was wearing an Australian Flag Top hat and out the back of the boat, they were towing an inflatable plastic donut again bearing the Australian flag. For a brief time, our son managed to convince his sister to ride along behind in the donut. However, she baulked and the next thing we see is our son’s boat being towed by the support boat under the command of his crew member while the skipper was being towed along out the back with the biggest grin you’ve ever seen. He’d broken just about every convention in the book, but that’s entertainment and when it came to the award presentation at the end of the day, he took out the Junior Aussie Larrikin Award along with a $5.00 cash prize. As you may recall, our son recently made quite an impression wearing his ghillie suit at the Australian Scouting Jamboree won the dance competition winning backstage passes to see the band Justice Crew. He’s been busy!

“I would rather die of passion than of boredom.”

Meanwhile, at 2.00 pm the Regatta was off. Geoff tells me that there were 50-60 boats ranging in size from the juniors in their baths tubs (Optimus) to 40 footers, which looked like giants next to the fingerlings. Apparently, I wasn’t the only one who missed the start of the race. Geoff’s boat couldn’t hear the start gun and had to scramble to get away. Unfortunately, our sailors didn’t place. However, I’ve heard tales from our son of waves from the bigger boats crashing over the side of his tiny Flying 11 and the boat filled up with water. The spinnaker rope also slipped under the boat putting the spinnaker out of action and slowing them down. Apparently, spinnakers are known troublemakers. They’re known unaffectionately as “the divorce sail” and “prawning” is when you’ve spinnaker drags along through the water. There was a complaint yesterday that one of the sailors had go prawning but hadn’t shared his catch. They have a good sense of humour at Gosford Sailing Club.

Here’s the “Senior” or adult Aussie Larrikin at work shooting water out at the crowd, including the General Manager, who is wearing the hat in the foreground and the Commodore.

“The sailor sits by his tiller, waiting and watching. He knows he isn’t sovereign of earth and sky any more than the fish in the sea or the birds in the air. He responds to the subtle shiftings of the wind, the imperceptible ebbings of the tide. He changes course. He trims the sheets. He sails.”

– Richard Bode: First You Have to Sail A Little Boat.”

Anyway, I hope you enjoy the photographs of the line up. We had a lot of fun and loved being a part of this great event.

We would like to wish all our fellow Aussies a Happy Australia Day, while mindful of the concerns of Indigenous Australians. What, if anything, did you do to celebrate? Any sailors out there? Any great stories you’d love to share? I’d love to hear from you!

PS  Here’s a few photos of the sea mist which floated in at the end of the day. It was scorchingly hot.

I loved this tree silhouetted against the mist.