While we Aussies are a tough breed, nobody’s invincible.

Now that Winter is setting in, it’s pretty clear that cold weather is our kryptonite. We must have some kind of inbuilt solar panel and need those vital sun’s rays to survive. Without them, we shrivel up and lose all power. Hibernate among the gum leaves alongside the koalas wishing we were small enough to crawl inside a soft, warm pouch.

The strange thing is that it’s not just the humans who are affected. I even saw my friend’s Scotch Collie down at the beach wearing a coat the other day. These dogs with their thick woolly coats survived a Scottish Winter once upon a time. However, the Australian version is just as allergic to the cold as it’s human counterparts.

Hence, when you hear an Australian cry “cold”, you’d better ask for clarification before you assume we’re talking about sub-zero temperatures.

Cold is all relative.

But before you write us off for being “soft”, just wait until the thermometer climbs to 30 degrees Celsius and you’re talking about being “hot”.

We might not be great with the cold but know how to handle our heat!

It is currently 14.8°C and I know I can’t blame you for the wind but it’s a roaring 14 knots and even the dogs are complaining that their fur is being blown all the way to New Zealand.

After preliminary inquiries, I’ve established that you were last seen on the Australian East Coast on Monday 21st September at 5.50PM, although there have been a few unconfirmed sightings since then.

Meanwhile, I’ve received confirmed reports that you’ve escaped back to the Northern Hemisphere and I’m starting to wonder if you’ve been snatched, although I’m yet to receive any ransom demands.

If you don’t report back in by 07.00 hours, you will be considered AWOL and can expect an instant court martial upon your return.

During the last week, what I hope is most Australians, have been rocked by ongoing racist remarks leveled at Adam Goodes, a much loved and honored Indigenous Aussie Rules (AFL) footballer and who was also named Australian of the Year 2014.

Many have come out strongly supporting Goodes, including setting up the hashtag #IStandWithAdam.

However, there are still some pretty vocal critics.

Adam Goodes (born 8 January 1980) is a professional Australian rules football player with the Sydney Swans in the Australian Football League (AFL). Goodes holds an elite place in VFL/AFL history as a dual Brownlow Medalist, dual premiership player, four-time All-Australian, member of the Indigenous Team of the Century and representing Australia in the International Rules Series. In addition, he currently holds the record for the most games played for an Indigenous player, surpassing Andrew McLeod’s record of 340 games during the 2014 AFL season.

I don’t know whether this story has made international headlines but it has reignited race debate here and personally, I think it’s about time racism made the front page and wasn’t hidden in the small print. Whether you believe that booing at Adam Goodes was racist or not, that doesn’t deny that our Indigenous Australians as a whole, cop what is often vile racist abuse. That what happens at a football match is just the tip of a very ugly iceberg. That there is endemic discrimination against Aboriginal people here and it has to stop! 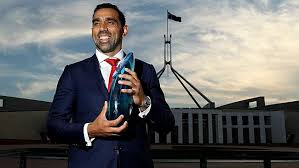 Adam Goodes, Australian of the Year 2014

Moreover, you don’t have to be an Indigenous Australian to see this. You just need two eyes, two ears and a heart…values. Even the smallest child has probably heard of the Golden Rule: Treat others as you would like to be treated and that certainly doesn’t include calling anyone an “ape” or saying they “belong in the zoo.”!!

These racial taunts have been leveled at Adam Goodes from the crowd at games and it is nothing short of a disgrace!

I am not going to address the details here as you just need to do a quick Google search to get the run down.

However, here are a few links:

The story started out back in 2013 when a 13 year old girl at a Swans match called Goodes “an ape” from the stands. Goodes confronted the girl and she was removed from the stadium and interviewed by Police. Goodes didn’t want her charged and she later apologised to Goodes and made amends. However, there are still rumblings from the sidelines about this. That Goodes was unfair to expose and out her and whether a 13 year old knows what is racist. This has taken the issue way beyond Goodes and the girl concerned and has launched a wider debate. Not so much saying that the girl should be charged but that Goodes made the wrong call.

Since then, there have been other racial taunts directed at Goodes as well as a lot of booing from the crowd. 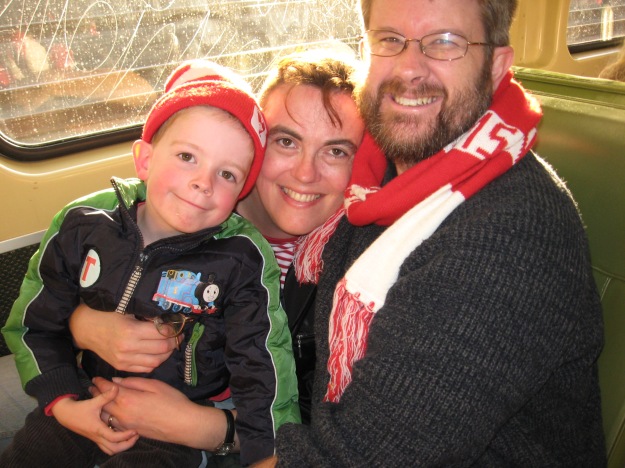 On the way to see Swans vs West Coast Eagles at ANZ Stadium in 2009. Mister played on the field with his team at half-time as part of the junior Auskick program.

I’ve been to a number of AFL matches and am a Sydney Swans supporter myself. I’ve heard that kind of booing at matches and know how a crowd can get carried away, However, even then it struck me as poor sportsmanship and this booing at Goodes falls into another category altogether. Even if it wasn’t intended to be racist in the past, now that it is being perceived that way, that’s what it means. It needs to stop!!

Somewhat friendly banter between opposing supporters at the Swans vs Essenden match July 2007: my husband and I!

As far as I’m concerned, she knew exactly what she was saying. You and I both know that if anyone called a kid in the playground a ape, at the very least, they’d be labeled a bully…not an innocent. So what’s the difference here? Just because Goodes is older than her, that doesn’t give her the right to be racist!

Just to emphasise this point, while I’ve been working on this post, my daughter approached me and said: “How could she not know that calling someone an ape is racist?” Miss is only 9 and she knows!

My kids are incredibly proud of our Indigenous people and actually thought they were Aboriginal. You see, my aunt’s partner is Aboriginal and they simply know him as “Uncle Darryl”. Darryl’s children are my step-cousins and while we don’t see them often as we live on opposite sides of the country, the kids really became attached to Uncle Darryl and believed they were Aboriginal. Even when I tried to explain to them that we were related to my aunt, it simply didn’t sink in. They couldn’t grasp genetics and all of these scientific explanations. Darryl was their uncle. He is Aboriginal. They were Aboriginal. There was such beauty and love in this. One day my daughter finally asked me: “So we don’t have any Aboriginal blood? Not even a drop?” Both kids are very disappointed!

I don’t just attribute this pride to our family situation. Rather, our school has built close ties with the local Mingaletta People and they learn Aboriginal painting and stories at school. Indeed, Aboriginality is truly celebrated at our school and not just given lip service either! It is interwoven in so much of what we do.

A few weeks ago, my son even attended a didgeridoo playing session at Mingaletta with his friend from school and I know that moved him deeply inside. It was a spiritual experience for him.

A few weeks ago while we were catching the train, he also told me that he would be proud to be Aboriginal.

These weren’t things my kids have said or done to be politically correct. Their love and respect for Aboriginal people just flows from the heart as a mark of respect, love and I some sort of connection which defies explanation but I do hope that this is something which will nurture and grow.

My kids, imperfect as they are, show what is possible not only through education but through knowing Aboriginal people in our family, at school and in the community and also being taught over and over again that we are all equal regardless of race,gender,disability or class.

My question and what I see as the ultimate challenge, is how do we reach adults who espouse racism and the like in our community?

Quite frankly, we all need to periodically scrub our brains out with soap and clean out the crap. Acknowledge our own bigoted biases and change the way we think. This doesn’t just relate to racism but also just to plain snobbery. Thinking that you’re better than someone else just because of where you live, what you drive and where your children go to school NOT who you are on the inside and your own actions. We don’t need to knock other people down to build ourselves up.

“You never really understand a person until you consider things from his point of view… Until you climb inside of his skin and walk around in it.”
― Harper Lee, To Kill a Mockingbird

So along with the rest of my family, we step out firmly supporting Adam Goodes. More than that. We cheer him on for taking a stand against racism and also for all he has done to encourage, develop and support Indigenous Australians while promoting greater acceptance, understanding and connection among all Australians…and all peoples! 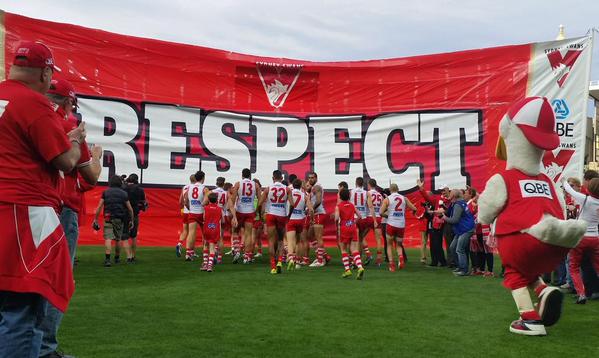 It is a noble cause which echoes the words and deeds of many of the world’s greats but the words of Martin Luther King particularly come to mind:

“I have a dream that one day right there in Alabama little black boys and little black girls will be able to join hands with little white boys and white girls as sisters and brothers.”